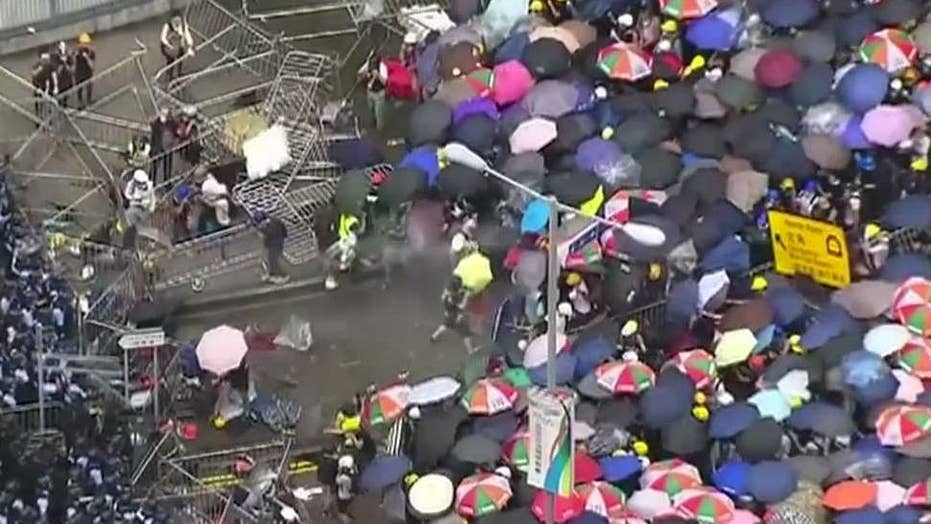 The number of protesters outside the Legislative Council, which had dwindled since a massive march last Sunday, began picking up again Thursday afternoon. With no response from the government, protests were slated to begin Friday morning and many people appeared prepared to spend the night at the central government complex.

The government announced that the complex would be closed Friday "due to security considerations."

The extradition bill pushed by Hong Kong Chief Executive Carrie Lam would allow suspected criminals apprehended in Hong Kong to be extradited to mainland China for trial. Critics say the bill puts critics of China's ruling Communist Party at risk of torture and unfair trials in the mainland and further chips away at the "one country, two systems" framework under which Hong Kong has been governed since 1997.

What do Hong Kong protests mean for US-China trade talks?

Director of the Center on Chinese Strategy at the Hudson Institute Michael Pillsbury weighs in.

Under the terms of the British handover, Hong Kong is guaranteed the right to retain its own legal, economic and political system until 2047, but the Chinese Communist Party under President Xi Jinping has been pushing ever-more aggressively to quiet independent voices in Hong Kong. Beijing has squelched all reporting on the protests in mainland media and accused foreign forces of stirring up disturbances in Hong Kong.

An estimated 2 million people took part in Sunday's march on government headquarters, which constituted the largest protest the semi-autonomous territory has seen in years.

Other demands by activist groups include investigating police tactics used against the protesters at a June 12 demonstration, cease calling the protests a riot, and releasing those arrested and dropping charges against them. Many have also called on Lam to resign, including Joshua Wong, the student leader of the 2014 "Umbrella Movement" pro-democracy protests.

Unlike Wong in 2014, no one group or personality has emerged to lead the protest movement, which taps into deep resentment among the young and middle class over the dominance of a moneyed elite over Hong Kong's economy and political institutions.

Instead, a broad coalition of trade unions, church groups, political parties, civic groups and veteran activists has mobilized their members, galvanized further by what was widely seen as heavy-handed police tactics.

Lam formally apologized Tuesday and said she was responsible for the extradition bill mess. The fact that she did not bow in apology was front-page news, with many in Hong Kong criticizing what they said was an apparent lack of contrition.

The chief executive has insisted the legislation is needed for Hong Kong to uphold justice and not become a magnet for fugitives. It would expand the scope of criminal suspect transfers to include mainland China, Taiwan and Macau.