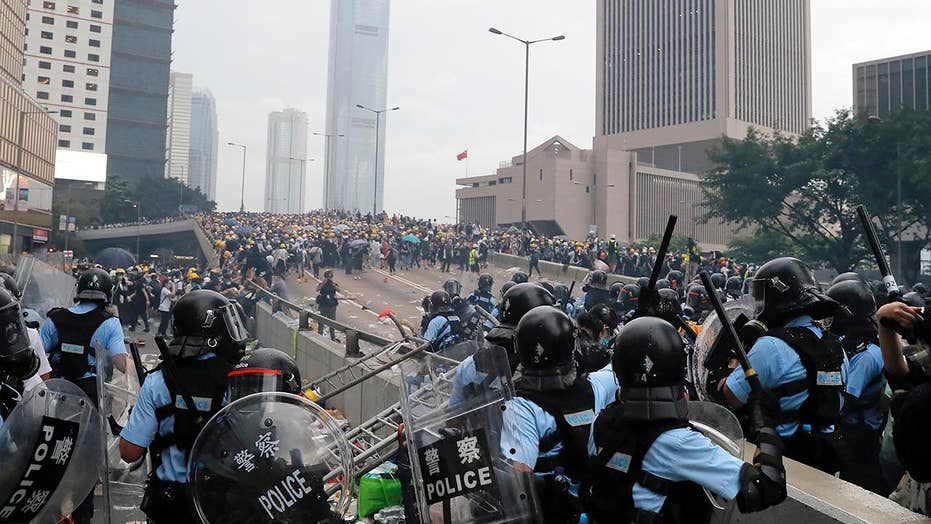 Hong Kong authorities fired rubber bullets, tear gas, and high-pressure water hoses on demonstrators who had gathered outside the city's headquarters on Wednesday to protest a controversial extradition bill that is widely seen as Beijing's encroachment over the semiautonomous territory.

The escalation of force came hours after the government postponed debate on the bill until later this month.

The crowd of mostly young demonstrators dressed in black filled nearby streets, overturned barriers, and tussled with police outside the government headquarters and offices of the Legislative Council.

Some protesters threw rocks, bottles, metal barricades and umbrellas at police. Police had reportedly warned the protesters that they would use force.

After some protesters appeared to have breached a police barricade around offices, police responded by firing nonlethal projectiles.

Q&A: WHY HUNDREDS OF THOUSANDS PROTESTED IN HONG KONG

Authorities searched some protesters and their bags as they began leaving the scene. Livestreamed reports from local television stations showed remaining protesters putting plastic wrap around their arms, wetting face masks and tightening goggles to protect themselves from tear gas and pepper spray.

The scene was reminiscent of Hong Kong's 2014 pro-democracy "Umbrella Revolution," for which nine leaders were convicted in April on public nuisance and other charges.

A protester reacts as she tackled by riot police during a massive demonstration outside the Legislative Council in Hong Kong, Wednesday, June 12, 2019. Hong Kong police have used tear gas and high-pressure hoses against thousands of protesters opposing a highly controversial extradition bill outside government headquarters. (AP)

Several protestors cited by The Associated Press said earlier they hoped Wednesday's actions would persuade the government to shelve the proposed amendments to the Fugitive Offenders Ordinance and the Mutual Legal Assistance in Criminal Matters Ordinance.

“We won’t leave till they scrap the law,” said one protester cited by Reuters.

Police in riot gear block a street near the Legislative Council in Hong Kong, Wednesday.  (AP)

In an interview with news channel TVB on Wednesday, Hong Kong Chief Executive Carrie Lam dodged questions about whether she would withdraw the bill in the face of chaotic and sometimes violent demonstrations against it.

"It's time to let lawmakers with different opinions express their views under the legislative process," Lam said. "On whether to retract or push it through ... our consideration is this. There is no doubt this issue is controversial. Explanation and dialogue are useful but perhaps that has not entirely dispelled worries."

BRET VELICOVICH: DON'T BE FOOLED, CHINA'S OUTREACH TO RUSSIA IS A DESPERATE CRY FOR HELP

Under its "one country, two systems" framework, Hong Kong was supposed to be guaranteed the right to retain its own social, legal and political systems for 50 years following its handover from British rule in 1997. However, many regard China's ruling Communist Party as having reneged on that agreement by forcing through unpopular legal changes.

Protesters are hit by police water cannon during a demonstration against a proposed extradition bill in Hong Kong, China, using only their umbrellas as protection (Reuters)

Speaking about her commitment to her job, Lam became tearful and her voice cracked as she said: "They said I'm selling out Hong Kong. How could I do that? I grew up here with everyone else in the city."

Lam added that she has never "felt guilty" over the issue and insisted she believed she was doing the right thing. She said she felt "worried and sad" about young protesters -- many of them teenagers -- on the streets, but said that as a parent to two sons, she believed it would be wrong to cave into young people's "willful behavior."

In this image made from aerial video, protesters gather in the streets outside the Legislative Council in Hong Kong, Wednesday, June 12, 2019.  (Apple Daily via AP)

Despite overwhelming opposition, Lam has defended the legislation as necessary to close legal loopholes with other countries and territories, Reuters reported. A vote was scheduled on June 20.

"Carrie Lam has underestimated us," said another protester cited by Reuters. "We won't let her get away with this."