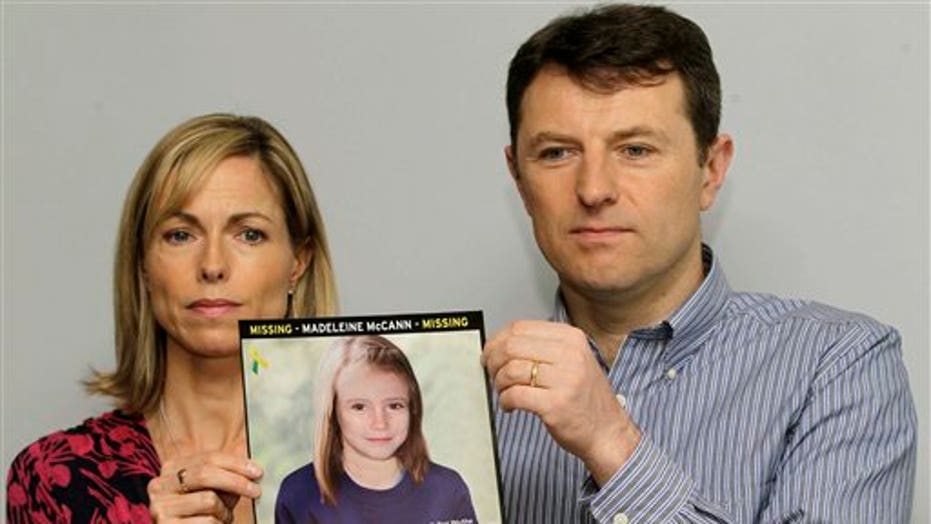 German prosecutors investigating a new suspect in the 2007 disappearance of Madeleine McCann now say they "assume the girl is dead.”

Hans Christian Wolters, a prosecutor in Braunschweig, Germany, made the announcement Thursday following a massive breakthrough in the infamous missing persons case.

Investigators on Wednesday revealed that a German citizen currently imprisoned for a sexual crime -- believed to be in and around the Portuguese resort area where McCann was at the time she vanished -- has emerged as a key suspect.

“In connection with the disappearance of the then 3-year-old British girl Madeleine Beth McCann on the May 3, 2007 from an apartment complex in Praia da Luz in Portugal, Braunschweig prosecutors are investigating a 43-year-old German citizen on suspicion of murder,” Wolters told reporters. “You can infer from that we assume the girl is dead.”

Madeleine McCann went missing in 2007 from her family's apartment in Portugal.  (Handout)

McCann, her parents say, disappeared after they had left her and her twin siblings asleep in their holiday complex while they had dinner with friends at a nearby restaurant.

As of Thursday, they are still holding out hope that she may be alive, somewhere.

"All we have ever wanted is to find her, uncover the truth and bring those responsible to justice,” Kate and Gerry McCann said in a statement prior to Wolters’ announcement, according to Sky News. "We will never give up hope of finding Madeleine alive but whatever the outcome may be, we need to know as we need to find peace."

Throughout years of investigations, more than 600 people had been identified as being potentially significant. But officers were tipped off about the new German suspect following a 2017 appeal, a decade after the girl disappeared.

In this 2012 photo, Kate and Gerry McCann pose for the media with a missing poster depicting an age progression computer generated image of their daughter Madeleine at nine years of age, to mark her birthday and the 5th anniversary of her disappearance during a family vacation in southern Portugal in May 2007, during a news conference in London. (AP)

Police said the suspect, described as white with short, blond hair and a slim build, was linked to a camper van seen in Algarve region in 2007 and was believed to be in the resort area in the days before and after May 3 that year.

He financed his life by committing thefts in hotels and apartments – and was involved in drug dealing as well, Sky News reported, citing German authorities.

"Someone out there knows a lot more than they're letting on," Detective Chief Inspector Mark Cranwell said on German television Wednesday. "Some people will know the man we're describing today... you may be aware of some of the things he's done."

First Prosecutor Hans Christian Wolters addresses the media during a press conference on the Madeleine McCann case at the public prosecutor's office in Braunschweig, Germany, on Thursday. (AP)

The suspect is currently imprisoned in Germany for a sexual crime, according to Christian Hoppe of Germany’s Federal Criminal Police Office. Hoppe told German public broadcaster ZDF that the man spent numerous years in Portugal and has two previous convictions for “sexual contact with girls.”

He is being investigated on suspicion of murder by prosecutors in Braunschweig because it is the location of his last registered address before moving abroad.

German prosecutors are not revealing the suspect’s name, Wolters said, to avoid jeopardizing the ongoing investigation. But numerous media reports have identified him as Christian Brueckner.

Though numerous suspects have come to light in the case previously, family spokesman Clarence Mitchell said that it seems as if there is something different this time.

“In more than 13 years of working with the family I can’t recall the police being so specific about an individual,’’ Mitchell told Sky News. “He is not being named and the police are quite adamant they are not going to do that, certainly not yet, but they want very specific details around his movement in 2007, even down to phone calls he received the night before Madeleine went missing and the fact he changed the registration of his car the day after.’’

Fox News’ Nick Givas and the Associated Press contributed to this report.