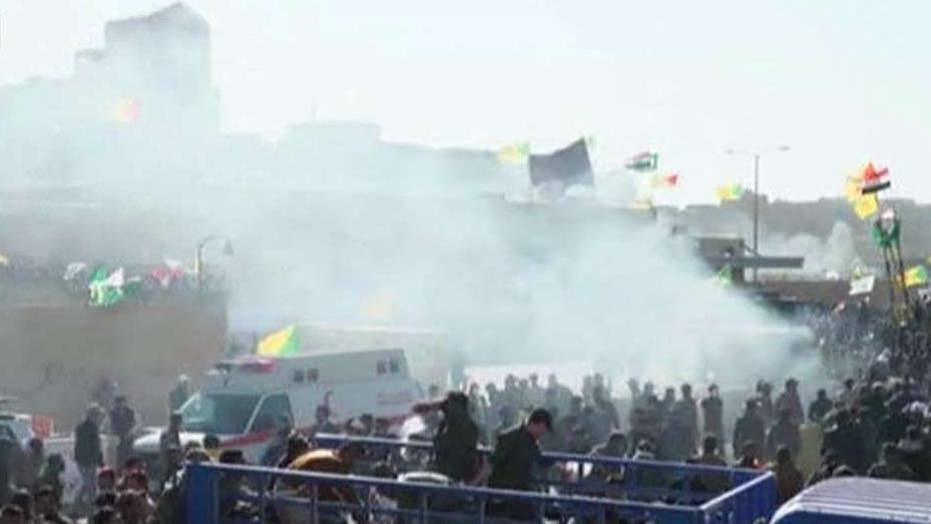 Crowds of angry Iraqis protesting America’s recent airstrikes against an Iran-backed militia laid siege to the U.S. Embassy compound in Baghdad Tuesday, chanting “Down, Down USA!” as they stormed through a main gate, prompting U.S. guards to fire back tear gas in response.

As of Tuesday night, protesters set up tents outside the embassy in the Iraqi capital where they said they intended to stage a sit-in “until American troops leave Iraq and the embassy is closed.” About 100 Marines are being sent to the embassy to bolster security and an Army Apache helicopter flew over the premises and dropped flares in a "show of force," with the goal of dispersing the crowd, a U.S. defense official told Fox News.

Earlier in the day, at least six U.S. soldiers were seen standing on the roof of the main building pointing their firearms at the demonstrators and sounds of gunfire could be heard.

U.S. Marines stationed in Kuwait were sent to the embassy in Baghdad, Iraq, following the escalation in violence. (U.S. Marine Corps)

Two Iraqi foreign ministry officials initially told Reuters the U.S. ambassador and staff were evacuated, but U.S. officials pushed back, telling Fox News that was not correct. Ambassador Matthew H. Tueller was not evacuated, but was out of the country on a planned vacation, an official said. A State Department spokesperson later told Fox News that "U.S. personnel are secure."

"We have taken appropriate force protection actions to ensure the safety of American citizens, military personnel and diplomats in country, and to ensure our right of self-defense," added Secretary of Defense Mark Esper. "We are sending additional forces to support our personnel at the Embassy."

Dozens of protesters, many of whom are reported to be wearing militia uniforms, are said to have come within 200 yards of the embassy after busting through an entrance used by cars.

“Now Iran is orchestrating an attack on the U.S. Embassy in Iraq. They will be held fully responsible,” President Trump tweeted. “In addition, we expect Iraq to use its forces to protect the Embassy, and so notified!”

U.S. soldiers stand guard on the roof of the U.S. embassy in Baghdad, Iraq, on Tuesday. (AP)

A video obtained by the AP showed the demonstrators trashing the embassy's reception area and also taking away paperwork.

The embassy attack, one of the worst in recent memory, followed deadly U.S. airstrikes on Sunday that killed 25 fighters of the Iran-backed group, the Kataeb Hezbollah. The U.S. military said the airstrikes were in retaliation for last week's killing of an American contractor in a rocket attack on an Iraqi military base, which the U.S. blamed on the militia.

Supporters of the militia held funerals Tuesday for the fighters killed, before setting their sights on the embassy.

Protesters smash a window inside the U.S. embassy compound in Baghdad on Tuesday. (AP)

The mob shouted “Down, Down USA!” as the crowd first tried to push inside the embassy grounds, hurling water and stones over its walls, The Associated Press reported. They raised yellow militia flags and taunted the embassy's security staff who remained behind the glass windows in the gates' reception area. The mob also sprayed red graffiti on the wall and windows, in support of the Kataeb Hezbollah, reading: “Closed in the name of the resistance.”

Following the breach of the gate, an Associated Press reporter at the scene saw flames rising from inside the compound. Smoke from tear gas that was fired rose in the area, and at least three of the protesters appeared to have difficulties breathing. A man on a loudspeaker also was heard urging the mob not to enter the compound, saying: “The message was delivered.”

No one was immediately reported hurt in the rampage and security staff withdrew inside the embassy when protesters started to gather outside.

"We differentiate between these militia groups and the legitimate protesters who have been in the streets for the last couple months demanding a better government and a better future for themselves. These people came right on in. They are very clearly identified," a U.S. official told Fox News.

"Iraqi security forces did participate [in protecting the embassy] and the President's message is that we continue to do so," the official added. "Our first priority is the security of our people and assets in the embassy. The President was very clear in the tweet that the government of Iraq needs to protect the embassy."

The Embassy, on its Facebook page, urged American citizens not to approach the compound and “to review their personal security and emergency preparedness.”

JAMES CARAFANO: US FOREIGN POLICY -- ARE WE BETTER OFF THAN WE WERE A DECADE AGO?

Jaafar al-Husseini, a spokesman for Kataeb Hezbollah, said the protesters had no intention to storm the embassy, only to send a message. He told the AP that the sit-in outside the embassy will continue “until American troops leave Iraq and the embassy is closed.”

As tempers rose, the mob also set fire to three trailers used by security guards along the embassy wall.

Yassine al-Yasseri, Iraq's interior minister, appeared outside the embassy at one point and walked around to inspect the scene. He told the AP that the prime minister had warned the U.S. strikes on the Shiite militiamen would have serious consequences.

"This is one of the implications," al-Yasseri said. "This is a problem and is embarrassing to the government."

The U.S. conducts 'offensive' airstrikes in Iraq and Syria after a U.S. defense contractor is killed in a rocket attack.

He said more security will be deployed to separate the protesters from the embassy, an indication the Iraqi troops would not move in to break up the crowd by force.

Seven armored vehicles with about 30 Iraqi soldiers arrived near the embassy hours after the violence erupted, deploying near the embassy walls but not close to the breached area. Four vehicles carrying riot police approached the embassy later but were forced back by the protesters who blocked their path.

U.S. Secretary of State Mike Pompeo also has said Sunday's strikes send the message that the U.S. will not tolerate actions by Iran that jeopardize American lives.