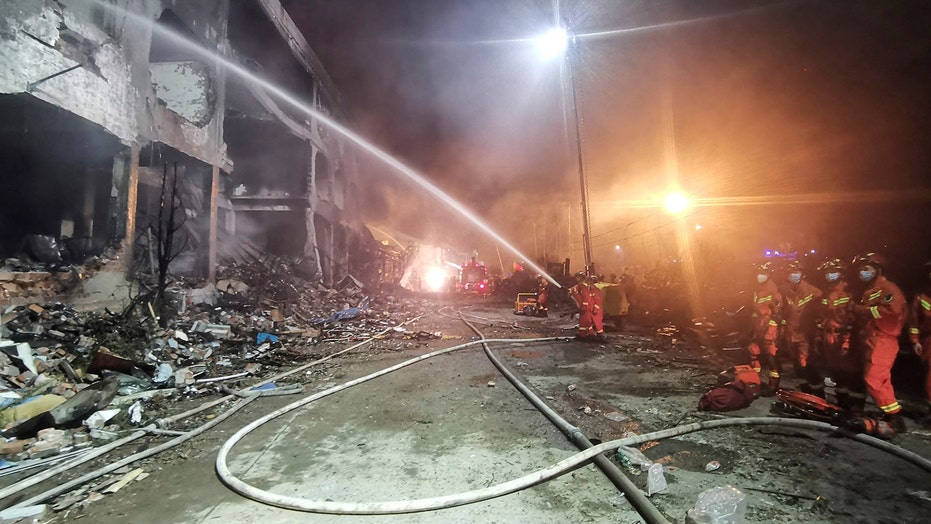 At least 19 people were killed and nearly 200 were injured after a tanker truck exploded in southeastern China on Saturday, according to officials.

The truck was carrying liquefied natural gas (LNG) when it exploded around 4:45 p.m. on the Shenyang-Haikou Expressway south of Shanghai in Zhejiang province, the official Xinhua News Agency reported.

After the initial blast, a second explosion followed when the damaged truck fell off the expressway onto a factory workshop, local officials told the news agency.

The explosions caused extensive damage to nearby buildings.

A firefighter puts out a fire in the aftermath of a tanker truck explosion that damaged buildings near a highway in Wenling in eastern China's Zhejiang province Saturday, June 13, 2020. (Chinatopix via AP)

One photo showed firefighters hosing down a row of buildings with blown-out facades well into the night.

In this photo released by Xinhua News Agency, firefighters work at the site of buildings damaged after a tanker truck explosion on a highway in Wenling, in eastern China's Zhejiang Province on Saturday, June 13, 2020. (Wang Junlu/Xinhua via AP)

The Wenling city government information office said on its social media account that houses and workshops collapsed and 189 people were treated at six hospitals.

More than a dozen were killed and others injured after the tanker truck veered off the Shenyang-Haikou Expressway after the explosion. (Chinatopix via AP)

A worker at a nearby restaurant told Xinhua that the blast shattered the windows of her home, but that her mother and brother were unharmed.

Wenling Deputy Mayor Zhu Minglian said more than 2,600 rescue workers were deployed to the site as efforts continue to find any survivors, the BBC reported.

Firefighters look for residents trapped in collapsed buildings in the aftermath of a tanker truck explosion near a highway in Wenling in eastern China's Zhejiang province Saturday, June 13, 2020. (Chinatopix via AP)

The blast is now under investigation.

China, which has built an extensive national highway network, has seen a rise in vehicle traffic and deadly crashes.

According to the World Health Organization, more than 200,000 people die every year in China in road accidents.

In rural areas, most of those killed are riders of two-wheelers or pedestrians, while in cities, the WHO says that drivers and passengers of cars and E-bike riders are most at risk.