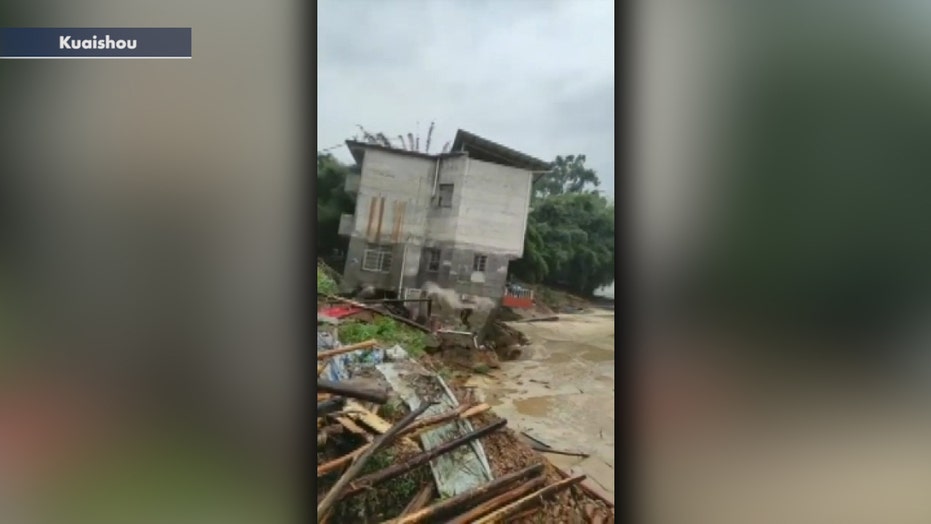 Hundreds of thousands of people were forced from their homes in south and central China after major flooding caused destruction throughout the region.

China's Ministry of Emergency Management said as of Tuesday, about 228,000 people were forced to seek emergency shelter after heavy rains triggered massive flooding.

Downpours in the southern region of Guangxi have been particularly severe. Six people were killed and one is missing after heavy rain triggered flooding and landslides.

Video on Tuesday from Guangxi showed a house teetering on the edge of a swollen river before it finally collapses into the water.

In this June 7 photo, released by Xinhua News Agency, facilities at a tourism site are toppled in the aftermath of a flood after heavy downpour in Yangshuo of Guilin, south China's Guangxi Zhuang Autonomous Region. (Lu Boan/Xinhua via AP)

The flooding has destroyed some 1,300 homes, with initial damage estimated at more than $500 million.

Officials said that after the rainstorms, 110 rivers in eight regions swelled to above flood-stage.

Rescuers carry a child to a boat during an evacuation of a flooded village in Qingyuan in southern China's Guangdong province on June 8. (Chinatopix Via AP)