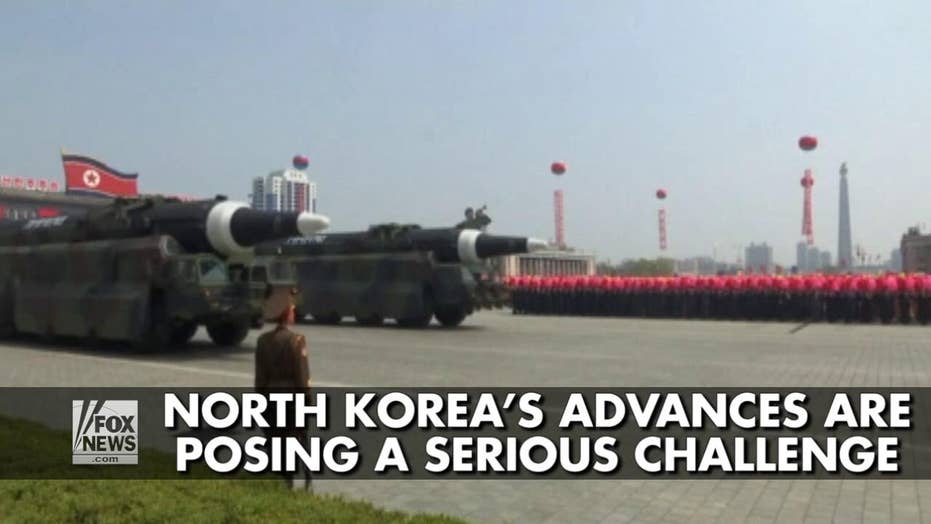 Can US stop North Korean missiles?

North Korean leader Kim Jong Un has already conducted 15 missile tests this year, the latest on Friday, without a single attempt by the United States to shoot down one of the strongman’s rockets – and some experts say that’s because the American military isn’t capable of doing so.

“U.S. missile defense against North Korea are not postured to shoot down North Korean missile tests,” Kingston Reif, director of Disarmament and Threat Reduction policy at the Arms Control Association, told Fox News on Monday. “Shooting down North Korean missiles that fall within the defended areas of these systems, such as the Japanese and U.S. homelands, would be challenging enough.”

During a test, the missile needs to be intercepted in “a matter of minutes” after it is launched, Reif said. Thomas Karako, senior fellow and director of the Missile Defense Project at the Center for Strategic and International Studies, also previously told Fox News that shooting down a missile is “a game of minutes” and the initial missile detection “would be really in terms of seconds.” On top of that, North Korea is developing missiles that would evade U.S. and allied missile defense systems, Reif said.

“The only system designed to defend the U.S. homeland, known as the Ground-Based Midcourse Defense system, has suffered from numerous technical and engineering problems, and testing in controlled conditions has not demonstrated that it can provide a reliable defense against even a small number of unsophisticated ICBMs,” he said.

The U.S. military is projecting confidence in its arsenal.

But Reif said don’t be fooled by the perfect record.

“Only one of those tests has been against an IRBM class target similar to the North’s HS-12,” Reif said.

South Korea says the U.S. military has completed placing more launchers on the high-tech U.S. missile-defense system installed in the southeast to better cope against North Korean threats. The deployment of the THAAD system has angered North Korea but also China and Russia, which see the system's powerful radar as a threat to their own security. (Kim Jun-beom/Yonhap via AP) (Yonhap)

U.S. officials have repeatedly assured the public that the military has several options for dealing with North Korea, with President Trump tweeting in August that “military solutions are now fully in place, locked and loaded.” Defense Secretary James Mattis said Monday that North Korea’s missiles “are not directly threatening” the U.S. or its neighbors in the Korean Peninsula.

“Obviously, Japan’s missile defenses are up and their radars are operating. Ours are,” Mattis told Fox News’ Jennifer Griffin. “And [the North Koreans] are intentionally doing provocations that press against the envelope for just how far they push without going over some kind of a line in their minds that would make them vulnerable, so they aim for the middle of the Pacific.”

But Reif cautioned officials against becoming overconfident in America’s defense capability in the face of a potential North Korean missile threat.

“Misplaced overconfidence in missile defense could prompt U.S. leaders to think that we can escalate in response to North Korean provocations without having to worry about a potential North Korean nuclear response,” he said. “This would greatly increase the risk of conflict on the Korean Peninsula.”

Trump, on Tuesday, stepped up the war of words between the two countries, threatening to “totally destroy North Korea” and said “Rocket Man [Kim Jong Un] is on a suicide mission for himself” during his address to the U.N. General Assembly.

Despite some experts’ lack of confidence in the U.S. missile defense systems, officials contend they will provide protection. Karako said the THAAD battery deployed to South Korea will not protect 25 million people living in the country, but will buy time for a military counterstrike.

“North Korea has hundreds of missiles, the THAAD battery is not there to defend the entire peninsula,” Karako told Fox News. “This is not about having a perfect shield and sitting there and playing catch.”