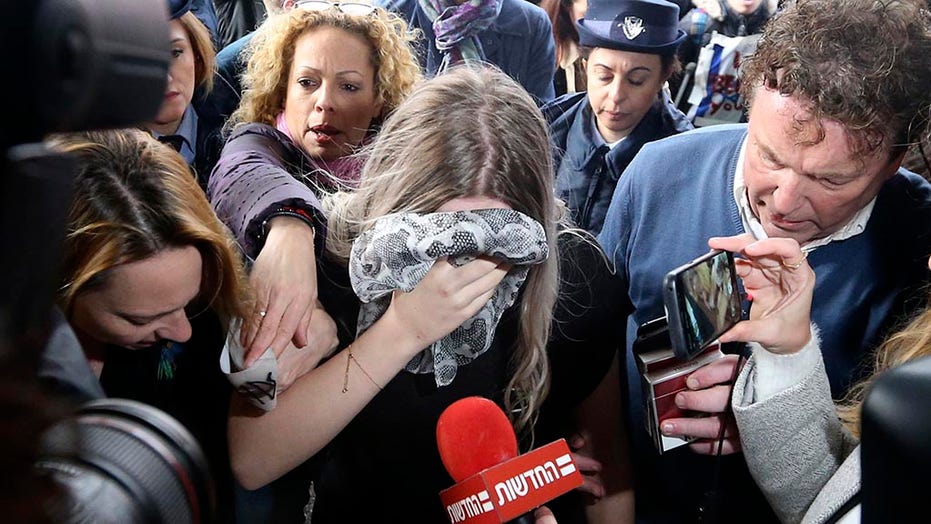 A British woman, who was convicted of lying about a gang rape by 12 Israeli tourists while in Cyprus, has asked a local court to overturn the decision, according to a report Friday.

Lawyers for the woman had vowed an appeal after her sentencing last week. She was given a suspended four-month jail sentence, Sky News reported.

The 19-year-old maintains she was raped and has accused Cypriot police of pressuring her to recant, according to the news outlet.

A 19-year-old British woman, center, who was found guilty of making up claims she was raped by up to 12 Israelis arrives at Famagusta District Court for sentencing on Tuesday, Jan. 7, 2020. She insisted she was raped and was coerced by investigators to retract her claim. (AP Photo/Petros Karadjias)

She argues in her appeal that she was denied a fair trial, Sky News reported. The appeal was filed Thursday with the Cyprus Supreme Court.

BRITISH WOMAN, 19, COULD FACE PRISON AFTER CYPRUS COURT FINDS HER GUILTY OF LYING ABOUT GANG RAPE

One of her claims accuses the trial judge of repeatedly shouting "this is not a rape trial, I don't want to hear evidence about rape" while denying her lawyers an opportunity to examine evidence supporting her account of being raped.

“When the trial proceedings are considered dispassionately, it is clear that the teenager did not receive a fair trial before the Famagusta District Court and that her unfair treatment and the treatment of her representatives and witness was in clear contrast to the treatment the prosecution and its witness experienced,” the teen’s appellate lawyer Michael Polak of Justice Abroad said, the news outlet reported.

The case drew widespread interest in the U.K. and Israel after she claimed she had been gang-raped and then was charged herself with making up the rape claims.

She said the rape happened at a Cyprus resort in July.