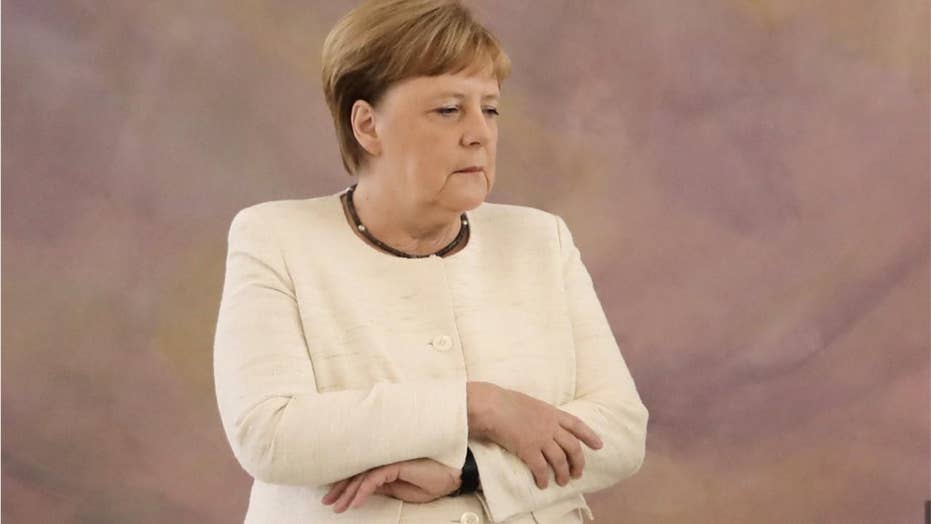 For the second time in a week, German Chancellor Angela Merkel appeared unsteady and shaking. The most recent instance occurred during a ceremony with President Frank-Walter Steinmeier.

For the second time in just over a week, German Chancellor Angela Merkel appeared unsteady and began visibly shaking at a public event in Berlin on Thursday, rekindling concerns about her health.

Merkel was standing alongside President Frank-Walter Steinmeier at a ceremony in Berlin where Germany's new justice minister was being formally appointed when she was seen trembling as she folded her arms across her chest.

About a half hour later, when she arrived in parliament, Merkel appeared to be fine, according to Sky News. She then set off a few hours later to Japan for the annual summit of the Group of 20 global powers.

Angela Merkel was seen shaking at a public event for the second time in less than two weeks as she stood alongside President Frank-Walter Steinmeier at a ceremony in Berlin. (Kay Nietfeld/dpa via AP)

A spokesman for the German leader, Steffen Seibert, dismissed any concerns over her health, telling news agency dpa that "everything is going ahead as planned. The chancellor is fine."

Germany is currently experiencing a record-breaking heatwave that has engulfed much of Europe. German weather agency Deutscher Wetterdienst said Wednesday a preliminary reading showed it reached 101.5 degrees Fahrenheit in Coschen, Germany, near the Polish border. The new record is a tenth-of-a-degree higher than the previous national record for June, set in 1947 in southwestern Germany.

Angela Merkel was seen shaking at a public event for the second time in less than two weeks. A spokesman on Wednesday dismissed any concerns over her health, saying "the chancellor is fine." (Kay Nietfeld/dpa via AP)

It is not publicly known if Merkel, who has led Germany since 2005, has any health problems as German privacy laws are very strict on that type of information.

But the incident came after Merkel's whole body was seen shaking last Tuesday as she stood outside in hot weather at an event in Berlin. The German leader, who is set to step down in 2021, then pursed her lips as she tried to remain steady as she stood next to Ukrainian President Volodymyr Zelenskiy.

Merkel dismissed concerns at the time, saying it was just dehydration and she felt fine after drinking three glasses of water that she "obviously needed."

This was not the first time Merkel has been seen shaking under similar circumstances in the hot sun, according to the dpa news agency. It did not give a date for that incident but said it was also ascribed to Merkel not drinking enough water.

The chancellor has a reputation for stamina garnered in years of late-night domestic and European negotiating marathons.

On Wednesday, she was on her feet in public for around two hours for events that included answering lawmakers' questions in parliament before giving a speech across town. During that period there was no sign then of any health issues, according to the Associated Press.

Merkel has rarely had to cut back her work schedule significantly — though she did so for a few weeks in 2014 when she cracked her pelvis while cross-country skiing in Switzerland during a winter vacation.

Last year, Merkel said she won't seek a fifth term as chancellor and won't seek any other political job after her current term ends in 2021.

She gave up the leadership of her center-right party after a pair of poor state election performances that followed a rocky start to her fourth-term government. She has shown no sign since of wanting to give up the chancellorship before her term is up.