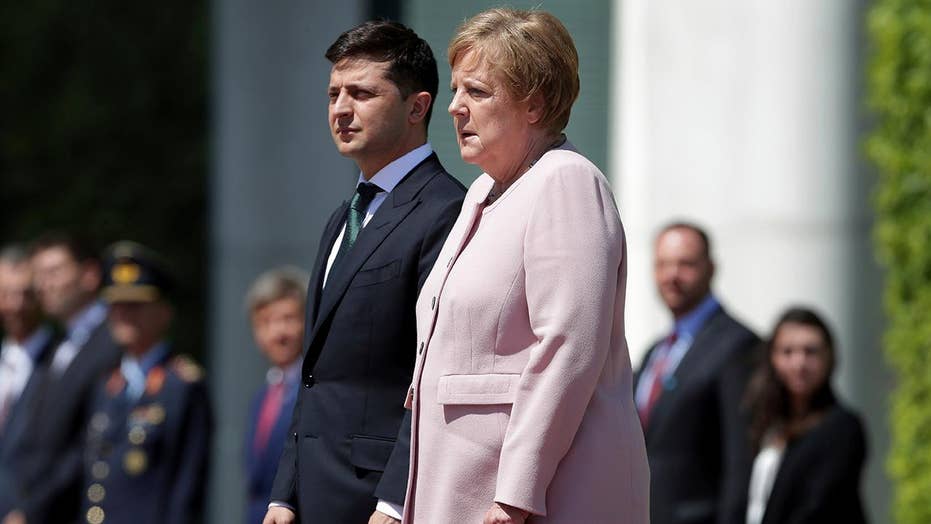 German Chancellor Angela Merkel appeared unsteady and began visibly shaking during an event in the hot sun in Berlin on Tuesday with the new Ukrainian leader, but later dismissed the incident and blamed dehydration.

A military band was playing the national anthems of the two nations at an official ceremony outside the chancellery when Merkel's whole body visibly shook and she appeared to be struggling to stand up.

The German leader, who is set to step down in 2021, then pursed her lips as she tried to remain steady as she stood next to Ukrainian President Volodymyr Zelenskiy.

Temperatures at the time were reported to be 82 degrees, according to the Associated Press.

After the anthems were over, Merkel appeared to regain her composure, walking quickly along the red carpet with Zelenskiy into the building, pausing to greet the military band and take a salute.  An hour later, Merkel told reporters at a joint news conference the two leaders had discussed bilateral issues and the Minsk peace process during Zelenskiy's first visit to the German capital as president.

Merkel, who turns 65 next month, then smiled after a reporter asked whether her shaking was cause for concern, saying that she was fine.

“Since then I have drunk at least three glasses of water - I obviously needed that and so I’m doing very well now," she said, according to Reuters.

German Chancellor Angela Merkel, right, and Ukrainian President Volodymyr Zelenskiy, left, listen to the national anthems during the welcoming ceremony, prior to a meeting at the chancellery in Berlin, Germany, Tuesday, June 18, 2019. (AP Photo/Markus Schreiber)

Zelenskiy then told reporters the chancellor had been secure at his side.

"She was totally safe," he said.

This was not the first time Merkel has been seen shaking under similar circumstances in the hot sun, according to the DPA news agency. It did not give a date for that incident, but said it was also ascribed to Merkel not drinking enough water.

In 2014, Merkel postponed a television interview at the last minute after reported weakness, but her spokesman said at the time she was able to carry it out later after eating and drinking something.

It is not publicly known if Merkel, who has led Germany since 2005, has any health problems. German privacy laws are very strict on that type of information, according to the AP.