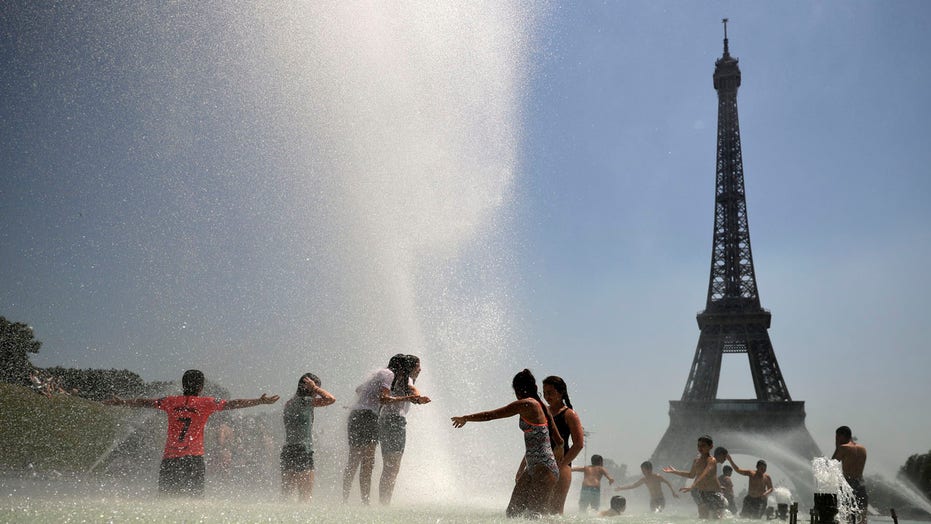 A scorching heatwave is baking western and central Europe, setting new temperature records for June in Germany and the Czech Republic as forecasters warn it will get hotter before the heat dissipates.

German weather agency Deutscher Wetterdienst said Wednesday a preliminary reading showed it reached 101.5 degrees Fahrenheit in Coschen, Germany, near the Polish border. The new record is a tenth-of-a-degree higher than the previous national record for June, set in 1947 in southwestern Germany.

The searing temperatures in Germany caused authorities to imposed speed limits of 62 mph or 75 mph on several short stretches of the highway until further notice in the eastern Saxony-Anhalt state. Those stretches usually don't have speed limits, but officials are concerned the high heat could cause expressway surfaces to buckle.

A forest fire about 70 miles southeast of Berlin has ripped through nearly 300 acres of land near the town of Lieberoser, triggering a large emergency response, Sky News reported.

In France, more than half the country has placed the heat warning level at orange -- the second highest alert -- as temperatures up to 102 Fahrenheit are forecast for the Paris area later this week.

Because such high temperatures are rare in France, most homes and many buildings do not have air conditioning. Multiple days of extreme heat and warm nights will not allow buildings to cool down and will also be combined with high humidity levels.

A sign shows 37 degrees Celsius at a building in the city of Stuttgart, Germany, Wednesday, June 26, 2019. (Marijan Murat/dpa via AP)

French charities and local officials were providing extra help for the elderly, the homeless and the sick this week, remembering some 15,000 people, many of them elderly, died in France during a 2003 heat wave.

"The difference with 2003 is the very high humidity this year, which means it will feel much hotter than the temperature shown by the thermometer and so the discomfort felt will be greater than in 2003," France's Health Minister Agnès Buzyn told reporters.

Tourists use umbrellas to shield themselves from the sun as they cross the medieval Charles Bridge on a hot day in Prague, Czech Republic, Wednesday, June 26, 2019. (AP Photo/Petr David Josek)

In Paris on Wednesday, authorities banned older cars from the city for the day since heat aggravates pollution problems. Regional authorities estimated the measure, targeting gasoline vehicles from 2005 or older and diesel cars from 2010 or older, affects nearly 60 percent of vehicles circulating in the Paris region.

In Paris, where more than 2,000 refugees and asylum seekers live in tents around the capital, volunteers fanned out throughout the makeshift camps to deliver water and help them cool off.

Tourists enjoy the summer temperatures on the Titlis mountain, on Wednesday, June 26, 2019, near Engelberg, Switzerland. All over Europe is hit by a heatwave. (Alexandra Wey/Keystone via AP)

“We've received 1,000 re-usable drinking bottles from the city that we've started handing out to people so they can have water with them,” Salvation Army director Emmanuel Ollivier told France 24. “And they have access to showers. We provide more than 300 showers a day.”

The heatwave is being caused by a plume of dry, hot air moving north from Africa over continental Europe this week.

Professor Hannah Cloke, a natural hazards researcher at Britain's University of Reading, said the heat along with a build-up of humidity was a "potentially lethal combination."

"Children, the elderly and people with underlying health conditions are particularly at risk," she told The Associated Press.