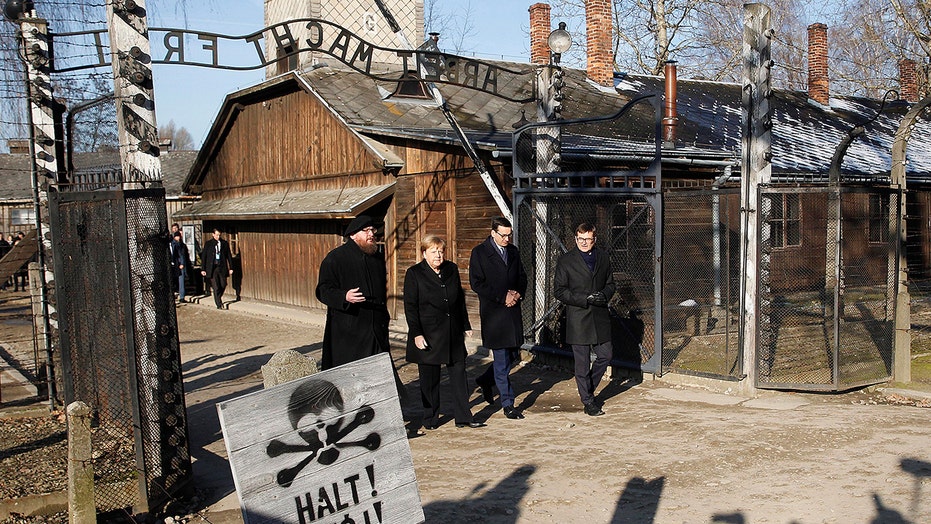 Merkel, accompanied by Polish Prime Minister Mateusz Morawiecki, began her visit by seeing a crematorium and then walked under the infamous gate with the words “Arbeit Macht Frei” – “Work will set you free” – before seeing the camp’s brick barracks.

The two leaders also went to the so-called Black Wall, where thousands of prisoners were executed. There they bowed their heads before two wreaths bearing their nations’ colors. They also visited the conservation laboratory, where old leather shoes were laid out on a table, and then a laying of candles at Birkenau, the part of the vast complex where Jews were subjected to mass murder in gas chambers.

Speaking at a gathering that included former Auschwitz inmates, Merkel said she felt “deep shame in the face of the barbaric crimes committed by Germans here.”

“Nothing can bring back the people who were murdered here. Nothing can reverse the unprecedented crimes committed here. These crimes are and will remain part of German history and this history must be told over and over again,” she said.

She called such responsibility a key element in German national identity today.

German Chancellor Angela Merkel speaks in the building of the so-called "Sauna" during her visit at the former Nazi German concentration and extermination camp Auschwitz-Birkenau in Oswiecim, Poland on Friday, Dec. 6, 2019. Merkel attends an event in occasion of the 10th anniversary of the founding of the Auschwitz Foundation.  (AP)

"Remembering the crimes, naming the perpetrators, and giving the victims a dignified commemoration, that is a responsibility that does not end," Merkel said. "It is not negotiable, and it is inseparable from our country. Being aware of this responsibility is an integral part of our national identity."

During her tenure as chancellor, Merkel has not shied away from admitting German responsibility for the atrocities at the hands of Adolf Hilter and the Nazis during World War II.

Merkel has paid her respects at other Nazi concentration camps, and she has been five times to Israel's Holocaust museum and memorial Yad Vashem.

Her visit to Auschwitz will ensure she follows in the footsteps of two former chancellors by seeing the site before her term ends. She was invited to the death camp for the 10th anniversary of the Auschwitz-Birkenau Foundation.

Merkel brought a donation of 60 million euros ($66.6 million) that will go to a fund to conserve the physical remnants of the site — the barracks, watchtowers, and personal items like shoes and suitcases of those killed.

Those objects endure as evidence of German atrocities and as one of the world's most recognizable symbols of humanity's capacity for evil. But they also are deteriorating under the strain of time and mass tourism, prompting a long-term conservation effort.

That donation to the Auschwitz Foundation comes in addition to 60 million euros that Germany donated when the fund was created a decade ago, according to the Auschwitz-Birkenau state museum. It also makes Germany by far the most generous of 38 countries that have contributed to the fund.

“Auschwitz is a museum but is also the biggest cemetery in the world... (Memory) is the key to building the present and future,” museum director Piotr Cywinski told Reuters ahead of Merkel’s visit at the invitation of the Auschwitz Foundation.

Poland's Foreign Ministry described the visit as “historic,” in an acknowledgment of the unique status Auschwitz has in the world's collective memory.

Merkel’s visit comes as Europe has seen a spike in anti-Semitic sentiment. A new report by the New York-based Anti-Defamation League (ADL) found that one in four Europeans hold anti-Semitic beliefs.

"These days it is necessary to say this clearly. Because we are experiencing worrying racism, increasing intolerance, a wave of hate crime," Merkel said. "We pay particular attention to anti-Semitism, which threatens Jewish life in Germany, in Europe and beyond."

On December 6, 2019, in the Auschwitz-Birkenau State Museum’s Conservation Laboratories, funded by World Jewish Congress President Ronald S. Lauder, Lauder shows German Chancellor Angela Merkel the shoes of children who were imprisoned at the site of the former concentration and extermination camp. (Shahar Azran/WJC)

Ronald S. Lauder, the president of the World Jewish Congress, said in a statement that Merkel is a "valued and reliable ally in the fight against this oldest of hatreds."

"Preserving and conserving the remains of the Holocaust are critical to maintaining an accurate record of the atrocities committed, especially as the number of living first-hand witnesses inevitably dwindles," he said. "Only by knowing the past can we protect our future, and we are deeply grateful for Chancellor Merkel for her commitment to the preservation of the site where almost 1 million Jews were brutally murdered by the Nazis only and exclusively because they were Jews."

Nazi German forces killed an estimated 1.1 million people at the Auschwitz-Birkenau complex during their occupation of Poland during World War II. Most of the victims were Jews transported from across Europe to be killed in gas chambers. But tens of thousands of others were killed there too, including Poles, Soviet prisoners of war and Roma, or Gypsies. The camp was liberated by the Soviet army on Jan. 27, 1945.