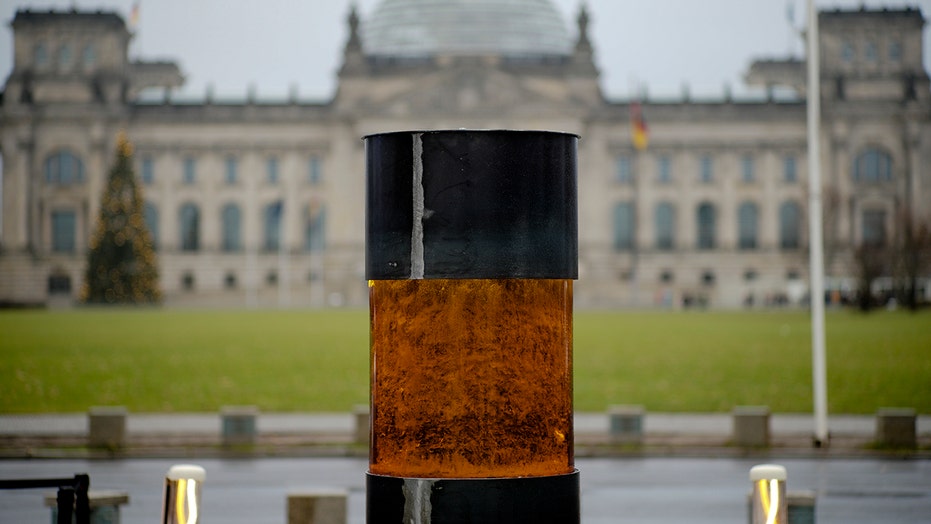 A German activist group has apologized for digging up and displaying what it claimed to be Holocaust victims’ remains in an installation meant to fight far-right extremism.

The Center for Political Beauty (ZPS), whose members consider themselves political artists, opened the anti-Nazi installation on Monday outside the parliament building in Berlin, calling it a “pillar of resistance.”

GERMAN BLOGGER WHO MADE UP FAMILY'S HOLOCAUST STORY FOUND DEAD IN HER DUBLIN APARTMENT: REPORT

About the size of an oil drum, the transparent urn was set atop a metal pillar and filled with soil the group said contained the remains of Holocaust victims. It claimed the remains were unearthed from 23 sites near Nazi death and concentration camps in Germany, Poland, and Ukraine.

The group set up the urn in front of the German parliament building, the Reichstag, in Berlin on Monday to draw attention to the perils of far-right extremism. (Photo/Markus Schreiber)

The provocative stunt set off condemnations in the Jewish community, including from members of the International Auschwitz Committee, with many calling it disrespectful to the dead. Jewish tradition dictates that the remains should stay in their original graves so as not to disturb the peace of those killed.

“Some of the survivors told me: ‘My beloved family members were carted so much across Europe during the deportations — why can’t they just be left in peace now?’” Christoph Heubner from the Auschwitz Committee told the Associated Press.

The ZPS apologized following the outcry and, by Thursday morning, the urn was wrapped in opaque black plastic to cover up the visible contents.

The group said it had no intention of hurting the feelings of survivors or their relatives with the display. By Thursday morning, it covered the transparent urn with an opaque black plastic to cover up the contents. (Photo/Markus Schreiber)

"We want to apologize sincerely to those affected, the survivors and their relatives, whose feelings we hurt," the ZPS said in a statement on its website late Wednesday.

“In particular, we want to apologize especially to Jewish institutions, associations, and individuals who see our work as disturbing or touching the peace of the dead according to Jewish religious law,” the group continued.

Six million Jews were murdered by the Nazis, many of them transported from around Europe to be killed in death camps like Auschwitz, Sobibor, and Treblinka established in occupied Poland.

The activist group initially said the urn should serve as a warning in times of growing far-right extremism of how conservative forces in Germany helped pave the way for Adolf Hitler’s fascists to come to power in 1933.