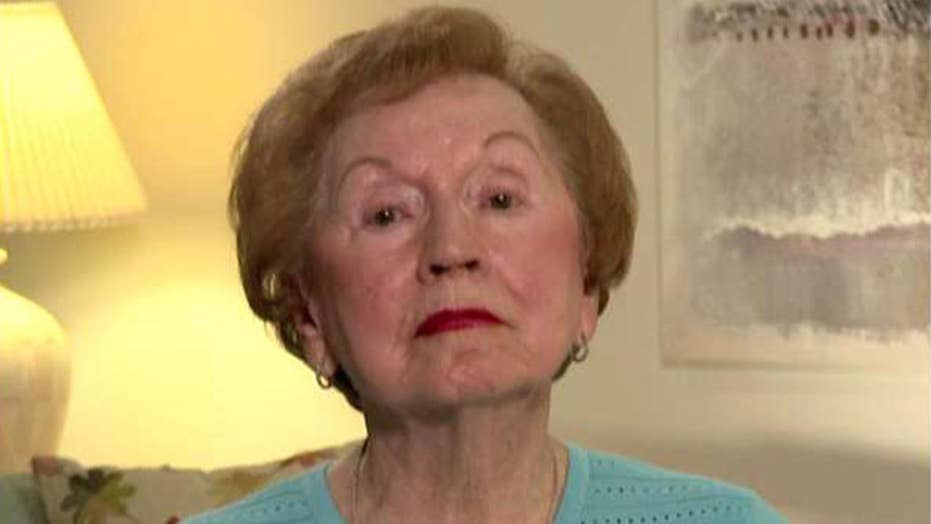 Holocaust survivor Sophie Tajch Klisman on meeting the man who played a role in liberating the concentration camp she was imprisoned in.

My earliest recollection of hearing about the Holocaust came in the mid-1950s, as our family sat around the Passover Seder table. My parents had invited my mother’s best friend to join us that evening, and I remember listening intently to the discussion about families lost and the devastation wrought by Nazi rule throughout Europe.

That mental image reappeared when I read that Amazon UK had taken down a promotion by the company Harma Art for the sale of T-shirts and hoodies bearing a silkscreened reproduction of “The Last Jew in Vinnitsa,” one of the most widely circulated photos of Nazi brutality.

A lone Jewish victim sits on the edge of a ravine with his face to the camera, as a member of a Nazi Einsatzgruppe (the SS paramilitary death squad) is about to shoot him in the back of the head. Fourteen other Einsatzgruppen troops stand behind the one with the pistol, about to witness just one more brutal killing in a day that must have taken hundreds, if not thousands of innocent victims.

That photo always gets to me. It personalizes the 6 million Jews murdered in the Holocaust to one terrified victim. For a brief moment, you can try to imagine the fear that each individual experienced just before death.

What did Harma Art intend when it had those T-shirts and hoodies manufactured? Was it looking to market that apparel to Neo-Nazis and anti-Semitic far-right operatives who might don the shirts at rallies and demonstrations?

It’s not readily apparent. The blurb that accompanied photos of the merchandise promoted it this way: “Choose from our great collection of authentic designs and stand out from the crowd!”

Shock value! Be the first in your neighborhood to wear a hoodie with a photo of a Jew about to be shot!

The ease with which this marketing pitch was made tells us volumes about the global trivialization and desecration of the Holocaust, even while there are still survivors with tattoos on their arms who witnessed the worst moral depravity in history.

We saw an early indication of what was to come in 1965, with the airing of the comedy series “Hogan’s Heroes” on CBS, with its bumbling Nazi characters. Later, in 1995, “Seinfeld” undermined the depravity of Nazis by introducing a mean shop proprietor, labeling him “the Soup Nazi.”

In the nearly 25 years since, we’ve seen dozens of examples of Holocaust-related terms, or the word “genocide” being applied to situations that are neither appropriate nor analogous.

Israel often is the target of such intentionally misplaced opprobrium. Its defensive barrier is compared to being akin to the Warsaw ghetto.

Editorial cartoonists have been engaged in this for some time, with depictions of Israeli soldiers as Nazis. One that I particularly recall was in the Danish newspaper Politiken. In a play on another famous photo from the Holocaust, in which Nazi soldiers, with guns pointed, are rounding up Jews in the Warsaw Ghetto, and a young boy has his hands up, this cartoon substitutes Palestinians for Jews, and Israeli soldiers for Nazis.

And then there was the homework assignment in Oswego County, New York, that asked students to make arguments for or against the “Final Solution.”

Even members of Congress are not immune to the spread of this kind of trivialization. In the debate over health care reform, members from both parties traded barbs that contained Holocaust-era imagery, including references to Nazi propaganda chief Joseph Goebbels, “the big lie,” and appeasement (as in the Munich Pact, which preceded the outbreak of war in Europe).

Comparisons of undocumented immigrant detention centers to Nazi concentration camps is the most recent example. Pro-BDS (Boycott, Divestment, Sanctions) legislation introduced in Congress only weeks ago alluded to the need for imposing an economic boycott of Israel, just as we had done with Nazi Germany (and the Soviet Union and South Africa).

Notwithstanding efforts in many places to institute Holocaust education programs, the passage of time has presented Jewish educators and organizations with a tremendous challenge.

A poll commissioned by the Conference on Material Claims Against Germany (known as the Claims Conference) found that among American millennials, “22 percent have not heard of or are not sure if they have heard of the Holocaust.” Further, 41 percent in the poll “believe that 2 million Jews or less were killed in the Holocaust.” And 49 percent could not name one concentration camp or ghetto. An astounding 66 percent were not able to identify the Auschwitz concentration camp.

Research in Canada, Austria and Germany revealed somewhat similar findings. Millennials in the latter two countries felt overwhelmingly that Holocaust education was important (many had participated in such programs); yet in Austria, 17 percent of those polled believed that only “100,000 or fewer Jews were murdered” in the Holocaust.

And that brings us back to the Internet offering for clothing adorned with the searing photo from Vinnitsa. The passage of time, 24/7 coverage of civil wars, executions and a daily plethora of amateur videos of shootouts and shoot-ups that come to us as “Breaking News” have dulled the senses to genocides and violence of historic proportions.

And though there are dueling arguments about the effect of video games, can one really doubt that such fare at least makes young people inured to violence, past or present?

Four decades ago, when I began my career in community relations, I used to have a line in my speeches that said: “There’ll come a time when the last survivor, who was there and could tell us about what he or she experienced, will be gone. And then there will be no one here to answer, with first-person authority, the Holocaust minimizers and deniers.”

We’re close to that point. We need to redouble our efforts, at every level, to educate and remember. Media outlets cannot be flippant or careless when these images and comparisons are aired.

The mega-Internet community, already under fire for allowing “anything goes” content policies to prevail over common sense and good taste, needs to be far more vigilant than it claims it is. And officeholders, at every level, need to dial back completely the kind of harmful hyperbole which often gets a pass for being just good old political rhetoric.

The slippery slope of Holocaust trivialization is upon us. We owe it to the victims, and ourselves, to ensure now that it be reversed.