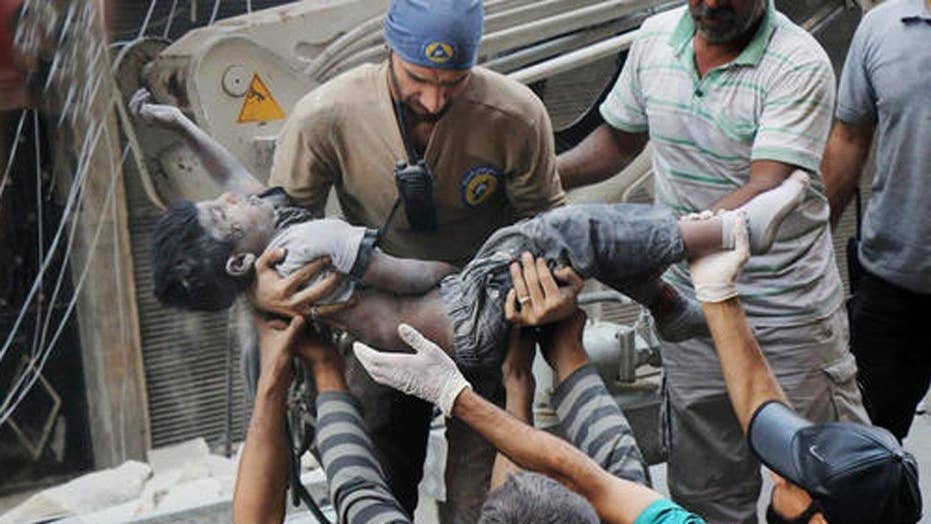 Overnight shelling and more than a dozen airstrikes on rebel-held parts of Aleppo killed at least 11 people Thursday, bringing the death toll in the last three days to at least 65, according to an opposition activist group and Aleppo's volunteer civil defense forces.

The Britain-based Syrian Observatory for Human Rights reported more than 20 airstrikes on eastern Aleppo that killed seven while shelling killed four, adding that clashes were taking place between government forces and insurgents on the city's northern edge.

Ibrahim Alhaj, a member of the Syrian Civil Defense, said the airstrikes killed 13 and wounded 25. He said some people remained buried under the rubble and search operations are underway.

State media reported that two girls were killed and five were wounded in rebel shelling of western government-held neighborhoods in Aleppo that hit a school in the Suleimaniyah neighborhood.

The Observatory said Wednesday that at least 358 civilians have been killed in eastern Aleppo since a U.S. and Russian-brokered truce collapsed on Sept. 19. The U.N. says over 100 children have been killed in the campaign, which has also included a limited ground offensive.

Near the capital Damascus, government buses gathered outside the suburbs of Qudsaya and Hammah where they were supposed to evacuate dozens of civilians to the rebel-held northwestern province of Idlib, the Observatory and state news agency SANA said.

The Observatory said the evacuation is part of an agreement between rebel factions in the two suburbs and the government that would include giving partial amnesty to some 300 fighters from the area. It said that after the evacuation ends, government forces would take control of the two areas.

Such evacuations have been carried out in other suburbs of the capital in recent months, including Daraya and Moadamiyeh.