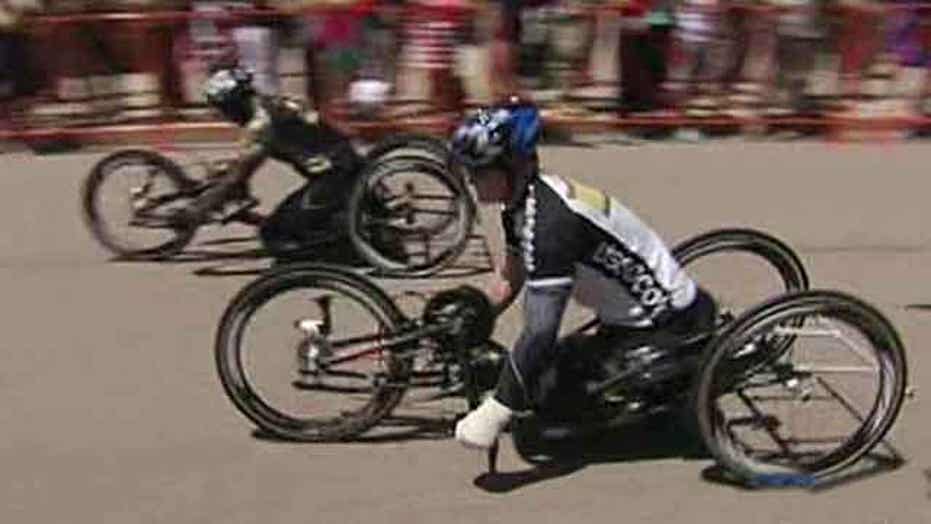 This week all branches of the U.S. military family meet to enjoy a week of camaraderie and fierce competition in eight sporting events: archery, cycling, shooting, sitting volleyball, swimming, track and field, and wheelchair basketball. Welcome to the Warrior Games, a Paralympic-style competition held by the Department of Defense featuring our nation's wounded warriors.

About 250 athletes representing teams from the Army, Marine Corps, Navy, Air Force and U.S. Special Operations Command are suiting up for the 2016 Games, which this year take place at the U.S. Military Academy at West Point, New York, from June 15 to 21.

This is the first year the Army is hosting the Warrior Games -- bringing together wounded, injured and ill service members and veterans from around the nation.

The Brits have been invited to participate, too -- Prince Harry has made support of military a priority in his work on behalf of his country, and a team representing the U.K. is battling alongside U.S. military for gold, silver and bronze.

Ryan Shannon is a 28-year-old retired Navy veteran from Morris, Illinois, who traveled to West Point to participate in the Games.

"My wife and I [are going] to the Games alone -- our two kids will stay with their grandparents," Shannon told LifeZette.

Shannon's two sons, Camden, 4, and Caden, 2, are a big support to their dad, who suffers from TBI (traumatic brain injury), PTSD, complex regional pain syndrome, and incomplete paralysis of his left foot.

"The boys are very helpful -- if they see me with a band-aid they'll hold my hand or come sit with me, so that's pretty cool," he told LifeZette.

Still, what has been on his mind these days is not pain or impairment -- but sheer competition. He will compete in track, swimming, and seated volleyball events.

"Doctors said I wouldn't be able to run again and I'm running," he said. "You have to make light of things, and have a sense of humor -- if you're too serious you'll sit around and not do anything, I guarantee you."

He and his wife, Jasmine, 28, have found they've needed humor when things get rough.

"She's there for me, and can sense when I'm having a bad day," he said. "If I need help or if I'm hurting, she just steps right in. One night I took my medicine and I didn't feel well, so I got up to go to the bathroom -- I thought I was going to be sick," he recalled. "She followed me, then went to get me some water. When she came back, I was dying. My heart had stopped."

One of Shannon's medications that affects his blood pressure -- plus an empty stomach -- were to blame, he believes.

"Jasmine found me lying on the floor wheezing. My body was trying to re-start. She beat me up a little bit, pounding on me to get me going again," he said, laughing. "I woke up and the first thing I said was, 'You want my military benefits!""

Shannon laughed again. "She said, 'You're so dumb,' and the paramedics came and took me away."

This American vet reflected on the strength of their marital bond. "Going from a completely normal marriage to 180 degrees from that -- it's a completely different marriage, and she stepped right up and into that." He added, "I don't think I'd be alive right now without her."

Shannon's different injuries happened at different times. One was service-related, and one, unfortunately, was a misdiagnosis of a routine injury.

While on the USS Pasadena in 2013, he got hit in the head during an onboard fire drill, which resulted in a mild TBI. Then, in October of 2014, he broke his foot.

"They told me at the hospital that it was a sprained ankle, so for three months I was treating it as a sprain," he said. "I knew it wasn't a sprain -- I knew it was bad. So after three months of complaining and going to the doctor, they finally did an MRI and saw that it really was broken. I had severe nerve damage and developed complex regional pain syndrome -- my brain thinks my foot is still broken, basically. After that I was diagnosed with incomplete paralysis. My foot and part of my ankle are paralyzed. That will not go away."

Still, this former Navy man battled on with his training.

They reduce secondary conditions such as hypertension, diabetes.

They lead to increased mobility, independence.

"It's painful to run. I have a nerve stimulator implanted in my spine, and I turn it off if I do athletics, so when I run it's painful -- I grin and bear it, just to get through it. I've trained myself to deal with the pain."

"I do therapy and take medication for it, and I also have medication to help me fall asleep and stay asleep," he said. "Before I realized I had PTSD, I tried to tough it out -- and said to myself, 'It will be OK.' I finally decided to go talk to someone because it was affecting other parts of my life. I don't like my pills at all, and I don't like being on medication, honestly," he said.

Shannon and his wife are excited and nervous for the Warrior Games.

"I get to go be with my other family at the Games. And I get to wear the word 'Navy' on my uniform. It's really giving me purpose again."

Shannon would like to finish his bachelor's degree in teaching and graduate with honors. He would also like to get more involved in Paralympic track and qualify for the Paralympics in 2020.

"The only one who can really decide what you can and can't do is yourself," he told LifeZette.

Jenny Sullivan, program manager for the Adaptive Reconditioning Program for Warrior Transition Command, told LifeZette that the athletes -- all of them -- inspire others on so many different levels. They exemplify what true courage is. Warrior Transition Command under the Department of Defense develops and coordinates care for wounded veterans returning from the theater of war, and also those who are readying for deployment.

"The most inspiring part for us is being there when they reach their goals," she said of the athletes. "Some may simply want to feel comfortable riding a bike, while some are competing for their personal record. But all push themselves to their full potential, and it's incredibly motivating to see."

She added, "It's also inspiring to see the family members who travel here to support them during the events. New athletes and experienced athletes will also develop a mentorship and camaraderie that lasts beyond the Games."

(Inline photos are courtesy of Ryan Shannon and family.)