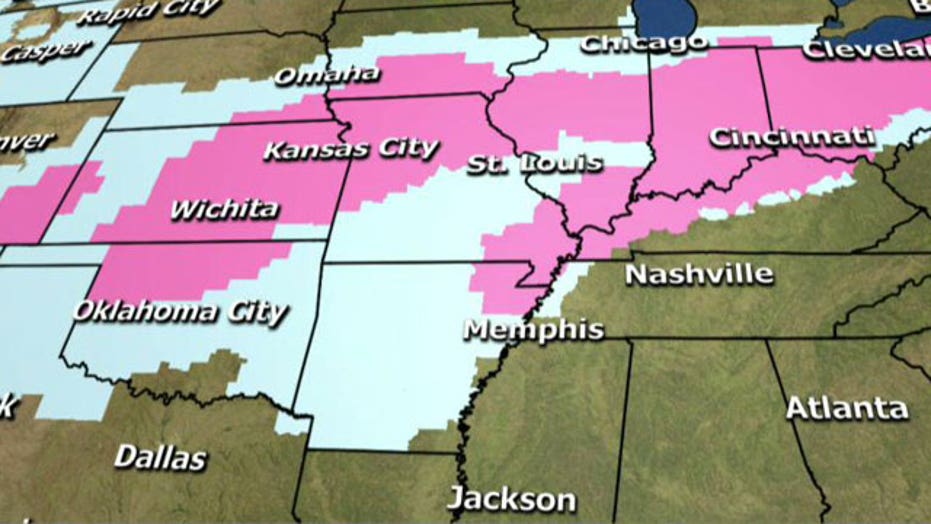 Parts of the Midwest and East Coast that were hit with wet, heavy snow on Monday are bracing for a second round as a storm that is moving across the central U.S. Tuesday promises to bring even more snow, freezing rain and ice.

Tuesday’s storm has prompted winter storm warnings from the National Weather Service in 24 states, ranging from Colorado to Maine, and is expected to create messy commutes for millions of people Tuesday evening and Wednesday morning.

Some of the heaviest accumulations are expected in states like Kansas and Missouri, which could see up to a foot of snow, according to estimates from The Weather Channel.

The New York City area could get 4 to 6 inches of snow overnight followed by rain, freezing rain and sleet, while areas north of the city could see up to 10 inches, MyFoxNY.com reports.

Northern Pennsylvania could also get a foot of snow, while 6 to 10 inches are expected in areas around Boston, MyFoxBoston.com reports. Around 2 to 6 inches of snow is expected in the Detroit area, according to MyFoxDetroit.com.

The Weather Channel is also predicting significant snowfall in Midwestern cities, including Indianapolis and Cleveland.

"This winter has been a pretty amazing winter across a whole lot of the country," said Joseph T. Pajor, deputy director of the department of public works and utilities for the city of Wichita, Kansas, which was expected to get about 6 inches of snow on Tuesday.

More than 600 flights nationwide were already canceled Tuesday morning, according to the flight-tracking website FlightAware.com.

The National Weather Service said Monday's storm brought 8 inches of snow to New York City, 3 to 9 inches to the Philadelphia area and up to 9 inches to central New Jersey.

And even though it's days away, the weather service said there's a chance of even more of the cold, white flakes beginning Saturday and continuing into Sunday on the East Coast. It could be a trifecta of foul weather.

On Monday, government offices, courts and schools were closed in parts of Connecticut, Delaware, Maryland, New Jersey, Ohio, Pennsylvania and West Virginia; scattered power outages were reported throughout the region. Speed limits were reduced on many major highways.

At least two deaths and one serious injury were blamed on the storm. In western Kentucky, where the snow began falling Sunday, a 24-year-old man died when his car skidded into a snowplow. On Monday, a 73-year-old New York City man was fatally struck by a backhoe that was moving snow.

A 10-year-old girl was in serious condition after she was impaled by a metal rod while sledding north of Baltimore.

In Ohio, where the storm dumped as much as 10 inches on the state Monday, there were numerous traffic accidents, none serious. "It was mostly bent fenders and hurt feelings," said Kim Carver, director of the Scioto County Emergency Management Agency in Portsmouth.