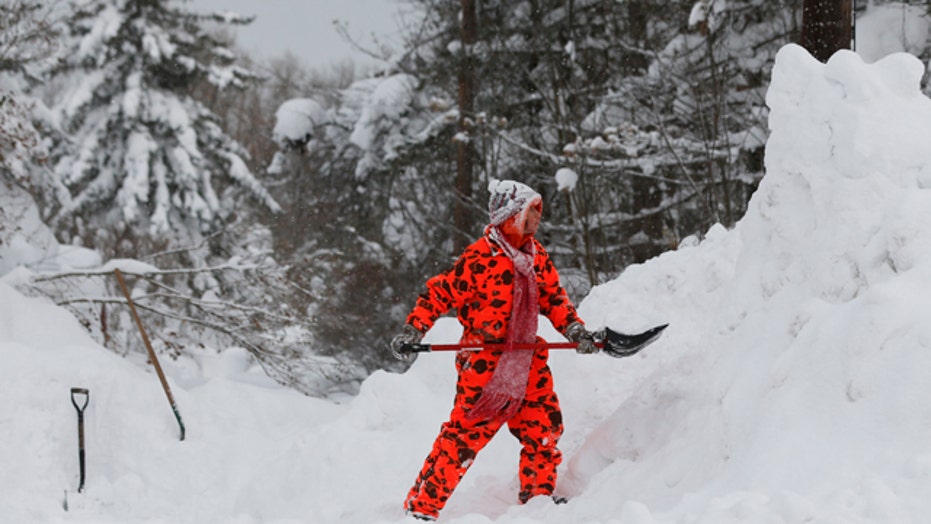 A new blast of snow pounded the Buffalo area Thursday, piling more misery on a city already buried by an epic, deadly snowfall that has left some areas with more than 7 feet of snow.

Gov. Andrew Cuomo begged drivers "pretty, pretty please" to stay off slippery, car-clogged roads in western New York while crews tried to dig out. Some areas got close to 3 feet of new snow by Thursday afternoon.

More than 50 people were evacuated from several mobile home parks in suburban Cheektowaga and West Seneca because roofs were buckling. Bellevue Fire Department Lt. Timothy Roma said more than a dozen buildings and carports collapsed, as did a metal warehouse operated by a Christmas decorations company, where damage was estimated in the millions.

Even the Buffalo Bills were hard hit. They had to move their home game against the New York Jets to Detroit for a Monday contest.

"Heavy lake effect snow will result in very difficult or nearly impossible travel at times in the heaviest portion of the band," the National Oceanic and Atmospheric Administration said. The storm was expected to last until late Friday morning. But forecasters say a rapid weekend warmup, with temperatures as high as 60 and heavy rain, could turn all that snow into floods.

The storm trapped more than 100 vehicles along the New York State Thruway. But Cuomo said those stranded on the Thruway have been removed other than a few truck drivers who opted to stay.

Interstate 90 remained closed from Rochester to the Pennsylvania line.

Some Buffalo-area schools were closed for the third consecutive day. All schools in the cities of Buffalo and Lackawanna were closed Thursday.

The University at Buffalo's North and South campuses were closed, along with Erie Community College's campuses. Five other colleges in the Buffalo area also called off classes.

Amtrak said the Maple Leaf, which runs between between New York City and Toronto, and Trains 63 and 64 would be restored Thursday, with delays expected. Service was suspended Tuesday because of the heavy snowfall and travel bans were issued by local officials in Erie County, which has Amtrak stations in Buffalo and suburban Depew.

Other Amtrak services between Albany-Rensselaer and Buffalo or Cleveland remained temporarily suspended through Thursday afternoon.