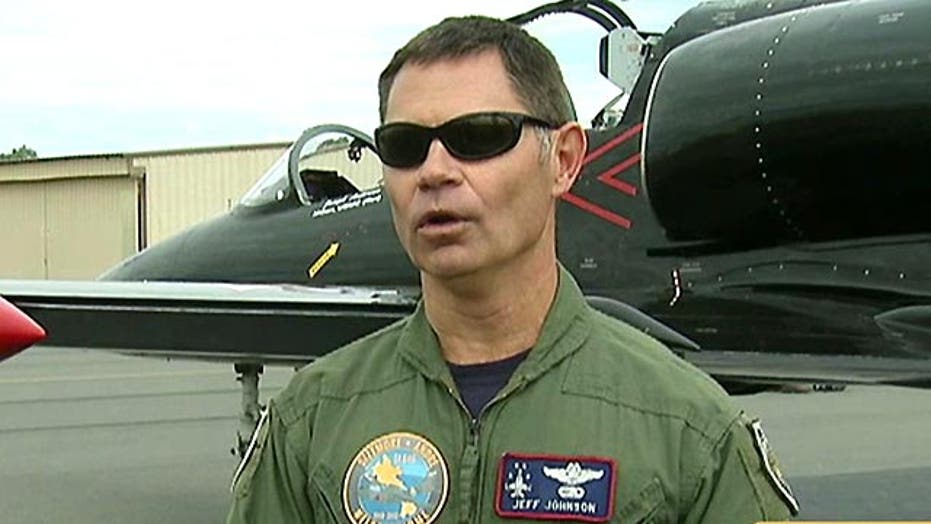 Buried for more than 40 years inside the plane they were flying when they were shot down over Laos in 1969, Major James Sizemore and his navigator Major Howard Andre made their final journey home Monday to Arlington National Cemetery, where they were laid to rest just the way they flew: side by side.

A single bugler played TAPS as the families of the airmen gathered and two horse drawn caissons made their way through the cemetery.

Overhead, eight civilian pilots performed a tribute flyover at their own expense after the Air Force said it couldn’t perform a traditional flyover due to sequestration budget cuts.

“I would hope that somebody would have done the same for me had I not made it back home from my tours overseas,” said retired Marine pilot Lieutenant Colonel Art Nalls, who flew an F-39 trainer over the cemetery.

Sizemore and Andre first met at Georgia Tech before enlisting in the Air Force and being sent to Vietnam. They were killed in action while flying missions against truck convoys supplying the Viet Cong.

Their remains were found a year ago and identified in April by the Pentagon's POW/MIA Accounting Command Task Force.

But once the burial was scheduled at Arlington, the Air Force told their families the U.S. government could not afford to honor the men with a traditional flyover due to budget cuts.

“Following numerous requests to volunteer units, the Air Force is unable to support the flyover request for Major Sizemore due to limited flying hours and budget constraints,” Air Force spokesman Captain Rose Richeson wrote in a statement. “However, the Air Force is providing an Aerial Control Team to assist with the two civilian warbird flyovers planned for today's event.”

That's when a group of volunteer pilots from the non-profit Warrior Flight Team (http://www.warrioraviation.org/) stepped in and agreed to fly in formation above the Arlington ceremony in their own planes, on their own dime.

Eight civilian pilots honored the veterans, arranging permission from the Department of Homeland Security, Secret Service, and FAA with an aerial tribute above Washington.

They even flew a Douglas A26 Invader - the same plane that the two friends from Georgia were flying when they were shot down 44 years ago. It was flanked by 2 P51 Mustangs.

The estimated fuel cost: of fuel alone for the ceremonial flyover is more than $24,000.

“We're here today to honor some fallen veterans,” said retired Air Force Brigadier General Jeff Johnson, who flew over Arlington as part of the ceremony. “Do I feel like those two heroes deserved a flyover? Yes, I do, and that's why we did what did today.”

“I would hope somebody would come after me,” said Nalls. That means a lot to the individual service member to know that you're not going to be left behind.”

With a government shutdown looming, the military may have to rely increasingly on these volunteer airmen to honor the nation's fallen.