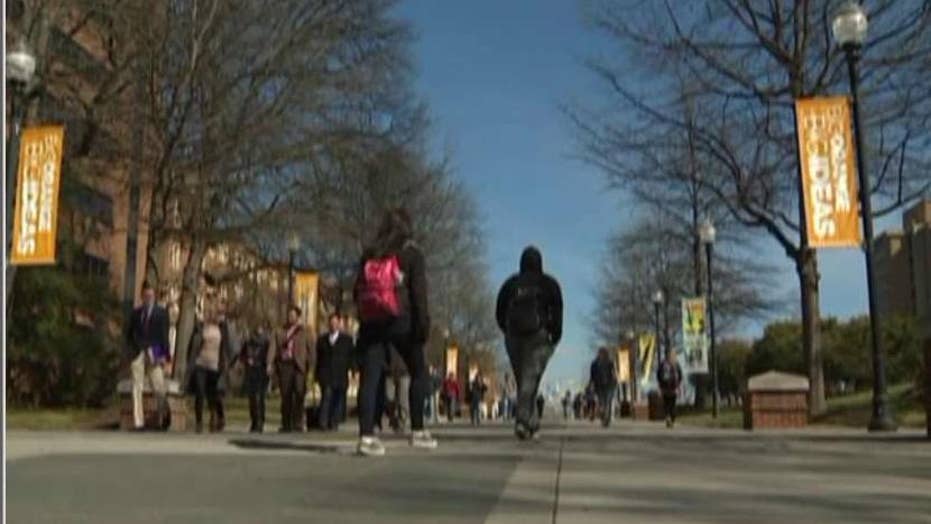 A physics major one semester away from graduation is suing to stop University of Texas-Austin from expelling him based on the unproven accusation he sexually assaulted a woman in a drunken, off-campus encounter.

In one of the latest cases of male college students turning to the courts after being punished by public universities for being accused of sexual assaults, the 21-year-old man identified as John Doe in legal papers claims the school is violating his Constitutional right to due process. His alleged victim, who did not attend the school, never filed a police report, according to his lawyer, yet the school took action based on her father’s complaint.

“What we’re seeing here is a nationwide movement that has gone too far in what the system sees as victims of campus assaults,” said Brian Roark. "Give us a fair hearing, and we'll deal with the consequences."

“My law office gets phone calls every day from students who want to defend their right to due process.”

Doe, who claims the sex was consensual, is facing a disciplinary hearing that could result in his expulsion, The College Fix reported. He filed the suit about two months ago with the goal of clearing his name.

The father of the woman who had sex with Doe the next morning told campus police of the encounter a month later, prompting a school investigation. Doe told investigators that the woman was enthusiastic about the encounter and talked about being in a pornographic movie.

“It’s not just me raping this drunk girl,” Doe told investigators, according to the lawsuit.

But the alleged victim later told her friend, who had had sex with Doe hours earlier, that she was still intoxicated from the previous night and was in fact unconscious during sex.

“I don’t remember throwing up, or coming home, or having this random … guy in my bed,” the alleged victim texted her friend, according to the lawsuit. “I didn’t want this guy.  At all. This guy wanted me and got me when I wasn’t conscious.”

Her friend reportedly responded, “Dude I didn’t realize you were unconscious, you were talking to me,” according to the lawsuit.

Differing accounts of drunken sexual encounters are at the core of most similar cases being dealt with by colleges and universities in the wake of a 2011 directive from the U.S. Department of Education's Office for Civil Rights. In that letter, the federal government threatened to withhold funding under the gender equity law known as Title IX if schools did not demonstrate they were taking serious action to halt the epidemic of sexual assaults on campus.

While proponents say the federal efforts have protected women on campus, critics say it sparked a rush to judgment against young men who can have their lives ruined by unproven accusations.

"The university has been placed under enormous political pressure to appear tough on those accused of sexual assault and as a result have adopted a practice of expelling males from the university without regard to the rights of the accused student of the evidence,” the lawsuit states.

Roark said UT-Austin's policy barred Doe from having legal representation, cross-examining the accuser or even calling on testimony from corroborating witnesses, including the other woman. He scoffed at the “27-year-old education grads” he said typically staff the school-run probes.

Dozens of young men are going to court to seek relief from punishment and reputational damage meted out by schools for alleged sexual assaults, according to Inside Higher Ed. As of November, there are more than 50 pending lawsuits filed by men who claim they were unfairly expelled from college after being accused of sexual assault.

“I think you can have a system that encourages victims to come forward while protecting the rights of the accused,” Andrew Miltenberg, a lawyer who specializes in campus assault due process, told FoxNews.com. “But are we there yet? No.”

Miltenberg gained national attention when he represented  a Columbia University student accused of raping a fellow student who went on to conduct a campaign against the man by carrying a mattress around campus and making a video re-enactment of her alleged rape.

Paul Nungesser was cleared of rape charges, but is now suing the school in federal court for failing to stop Emma Sulkowicz from harassing him. Sulkowicz, with the help of three friends, carried the mattress when she received her diploma during graduation to the cheers of fellow students.

Nungesser’s mother, who was at the graduation ceremony, told Newsweek,  “I would have liked to go to every single parent in that audience and say, ‘I am the mother of Paul, and I am very proud of my son, and I hope you discuss with your sons and daughters what they did to him.”

In one of the first of its kind, the U.S. District Court in Rhode Island on Monday ruled to allow a former student’s lawsuit to proceed against Brown University, alleging that the school violated his due process and discriminated against him based on gender during a wrongful sexual misconduct investigation.

“My law office gets phone calls every day from students who want to defend their right to due process,” Miltenberg said. “The courts are going to have to see enough of these that there is a sense across the country that, Wait, this is coming up too much, there really must be something wrong.”