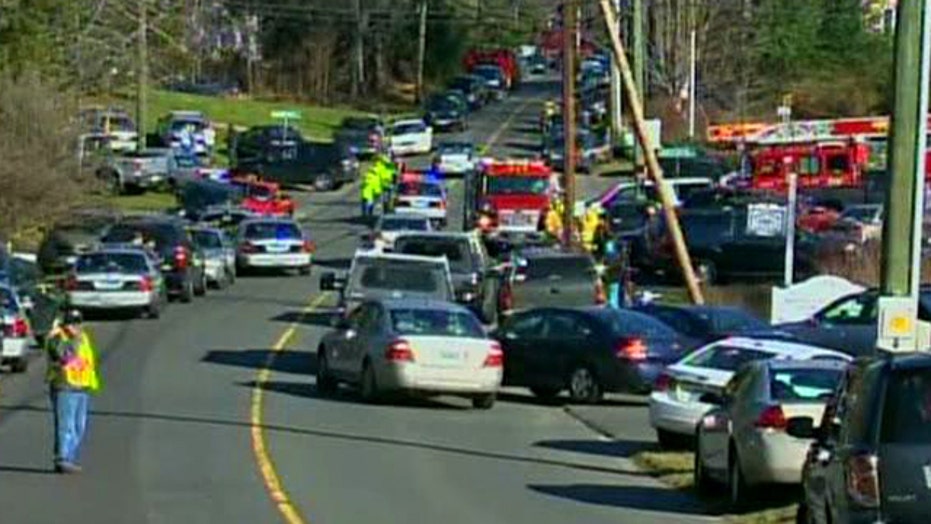 Mother of student inside CT school during shooting speaks

The teachers the little ones have always trusted were there for them when a crazed gunman turned Sandy Hook Elementary School into a shooting gallery early Friday.

As reports come in from the horrific shooting in an affluent small town in Connecticut, the bravery of the teachers at the 600-student school provided a glimmer of hope in a story that sickened the nation and brought President Obama to tears.

One teacher ushered her students into a bathroom and locked the door, according to Lisa Procaccini, whose daughter attends the school.

"She was in a small class -- a reading group, and they started hearing bangs," Procaccini said. "Her teacher, and I’m grateful for this, rushed kids into the bathroom and locked the door. They told kids it was hammering and tried to keep them calm.”

Later, with the shaken survivors safe at a local firehouse, parents expressed their gratitude to the men and women who work every day with their kids and hugged their own children.

"Children were crying," Procaccini said. "[My daughter] did tell me about a little boy that was in a police officer’s arms, bleeding. I don’t know if she gets it."

Stephen Delgiadice told The Associated Press his 8-year-old daughter heard two big bangs, and teachers told her to get in a corner. His daughter was fine.

"It's alarming, especially in Newtown, Conn., which we always thought was the safest place in America," he said.

Richard Wilford's 7-year-old son, Richie, is in the second grade at the school. His son told him that he heard a noise that "sounded like what he described as cans falling."

The boy told him a teacher went out to check on the noise, came back in, locked the door and had the kids huddle up in the corner until police arrived.

"There's no words," Wilford said. "It's sheer terror, a sense of imminent danger, to get to your child and be there to protect him."

Melissa Makris, 43, said her 10-year-old son, Philip, was in the school gym. "He said he heard a lot of loud noises and then screaming. Then the gym teachers immediately gathered the children in a corner and kept them safe in a corner," Makris said.

An 8-year-old student told WCBS-TV how a teacher saved his life as he walked toward the school’s main office, where the shooting started.

"I saw some of the bullets going down the hall that I was right next to, and then a teacher pulled me into her classroom," the student said. "It sounded like someone was kicking a door," he said of the bullets.

Sources identified the gunman as Adam Lanza. He showed up early Friday wearing black military garb and toting three guns, according to reports. In the main office, and with the intercom transmitting the horror through the school’s halls, he shot the principal.

By the time it was over, Lanza, six adults and 20 young children were dead in the second-worst school shooting in the nation’s history. Only the 2007 shooting at Virginia Tech, which left 32 dead, was worse.

Parent Brenda Lebinski told Reuters she rushed to the school, where her daughter is in the third grade, as soon as she heard the news.

"Everyone was in hysterics -- parents, students," she said. "There were kids coming out of the school bloodied. I don't know if they were shot, but they were bloodied."

A shaken President Obama spoke Friday afternoon about the tragedy, noting the "beautiful, little kids between the ages of 5 and 10 years old" who died. And as he dabbed at tears, he also spoke of the educators who died.

"Among the fallen were also teachers, men and women who devoted their lives to helping our children fulfill their dreams," Obama said.