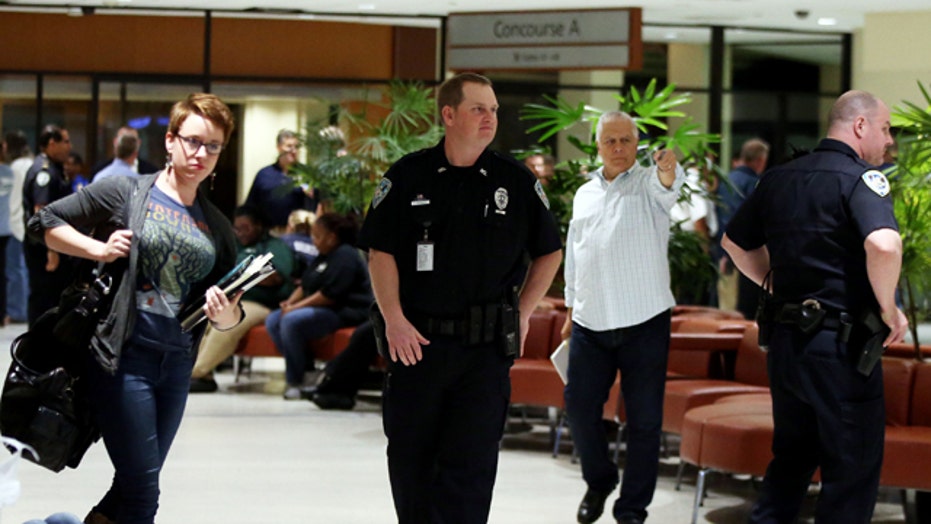 Richard White, 63, was pronounced dead Saturday afternoon, according to officials.He was shot multiple times by an officer, police said.

News of his death came after a press conference that raised new fears about the circumstances leading up the the incident.

"As you know this was unexpected incident involving a clearly troubled and disturbed individual," said New Orleans Mayor Mitch Landrieu at a Saturday afternoon press conference.

Officials said they noticed White had been carrying a bag when they checked surveillance video after the incident.

Normand said as the bag was being checked other investigators from the Bomb Squad were combing through White’s car parked on the airport ramp. They found in the trunk an acetylene tank, a freon tank and an oxygen tank.

Normand said investigators don't know what White was doing with the tanks. He said White was suffered from mental illness.

White approached the airport security checkpoint Friday evening, pulled out a can of the insecticide and began spraying both agents and several passengers standing in line before he then drew a large machete from the waistband of his pants, Normand said.

The male officer grabbed some luggage to defend himself from the machete, and then was chased by White, Normand said.

White then ran through the detector chasing a female TSA agent when Jefferson Parish Sheriff's Office Lt. Heather Slyve drew her weapon. As she approached White, he continued to swing his machete. Slyve fired three rounds, striking White in the face, chest and leg.

The gunfire struck a TSA agent in the arm, police said. Some bystanders suffered minor injuries as they scrambled to leave the area, police said.

The TSA agent, who only gave her first name, Carol, recalled the episode.

"The man was within inches of whacking me with a machete," she said at a press conference. "This man was swinging very hard, very hard with that machete."

"Thank God the officer was as close as she was because I wouldn't be here today," the TSA agent said.

She said initially she thought White had struck her in the arm with the machete.

It was not until she got to the hospital that she realized she had been shot in her upper right arm. The bullet went right through her arm and hit White.

She showed off her bandaged wound at the press conference Saturday with the mayor and other officials..

"I originally thought it was the machete," she said. "I do better not looking at injuries."

White was still alive and in surgery at a hospital, Normand said.

Bystanders described minutes of panic and chaos at the airport in the New Orleans suburb of Kenner.

"Everyone was ducking for cover. It's New Orleans. I knew they (the gunshots) were coming from the security checkpoint area," said Garret Laborde, 31, a traveler trying to fly to Houston. "I immediately ducked down ... Then we waited."

He called the scene "instant chaos" with "screaming, lots of females screaming for a short period of time." Some bystanders ran to get out of the way and received minor cuts and bruises, the sheriff said.

Brett Leonard, whose flight from San Francisco landed in New Orleans shortly before the attack, told the Associated Press that passengers had no idea what happened until they walked outside after getting their bags. Leonard said he was packed into a cab with several strangers as police evacuated the area.

Passenger Jeremy Didier told Fox8Live.com that he saw someone "jump past the security guards waving a machete and cutting people." Another traveler, Cameron Matthews, reported hearing several shots and seeing people running before she hid until the incident was over.

Logan Tucker, 26, of Meridian, Mississippi, and Phillip Green, 33, of Houston, both deckhands on a tugboat headed to Houston for work, said they were about 25 yards from where the incident unfolded.

"I heard the gunshots," Tucker said.

"It was pandemonium after that," Green said. "I took cover. I didn't want to become part of the story."

Green said they saw the machete and the suspect on the ground as they were leaving. The knife was about 14 inches long, he said.

The male officer was taken to a local hospital, where he was being treated for non-life-threatening injuries, the TSA said. The entire airport was closed for about 20 minutes.

White was a taxi driver who recently received his chauffeur's license, authorities said. He had "little to no criminal history" aside from a few disturbing the peace and traffic charges, Normand added.

Normand said authorities do not believe White posed a national security threat, and were investigating whether he had any connections to the airport or anyone who was there Friday night.

FBI agents were at the airport and were assisting with the investigation, a bureau spokesman said.