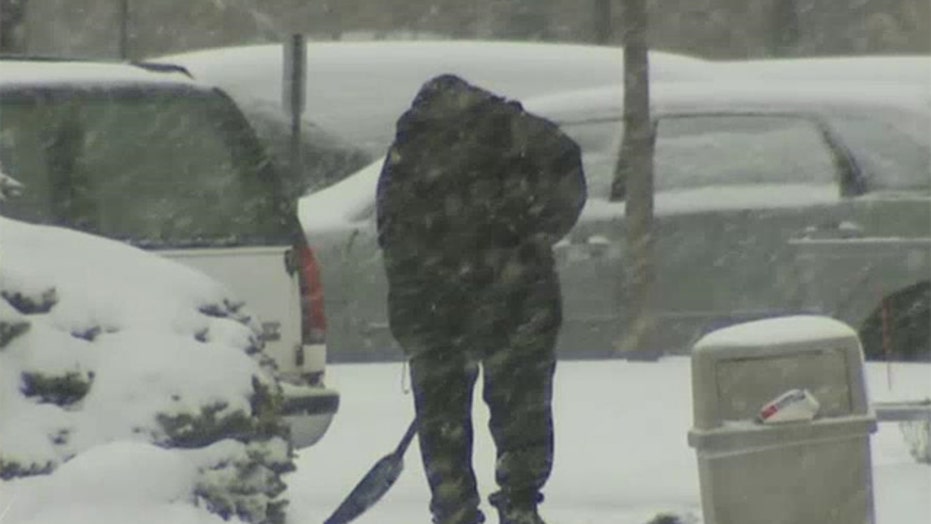 Snow and ice slams the Midwestern US

A snowstorm sweeping the Midwest is poised to dump between 4 and 7 inches of snow on Boston, which has seen 100-plus inches this winter in record snowfalls.

This new round of snow could push Boston over its 20-year-old season record.

"We have come this far, we might as well break the record," said William Babcock, National Weather Service meteorologist in the Taunton, Massachusetts office. "We have a couple of storms to push us over the record. Once that is done we won't complain if we don't get any more snow."

Snowfall is expected by early Monday across southern New England, with spots up to 8 inches in southeastern Massachusetts and central and eastern Rhode Island.

The National Weather Service has issued a winter storm warning for southeastern Massachusetts, except for Cape Cod, and most of Rhode Island.

Light snow is expected to spread across the region from the west Sunday afternoon with the heaviest snowfall Sunday night into early Monday. Some rain could mix in in southern areas.

Forecasters are expecting another round of snow, sleet and freezing rain Tuesday night into Wednesday.

February 2015 was one for the record books in the Northeast.

In the Midwest and central part of the U.S., various states, including Missouri, Illinois, Indiana and Kansas, experienced a mix of freezing rain and snow on Saturday.

The arctic winter weather system had led to several record-breaking cold temperature readings in Iowa. Mason City, Iowa, hit a record low of 18 degrees below zero at 6 a.m. Friday, shattering its 115-year-old record for Feb. 27 of 12-below, set in 1899, the National Weather Service said. Waterloo also reached a record low of 24-below zero on Friday. The previous record of 14-below was set in 1897.

A dusting of snow started Saturday afternoon overnight into Sunday for central and parts of eastern Nebraska, with some heavier snow in the southern portions of the state.

According to the National Weather Service, freezing rain was possible on Sunday in the southern parts of Illinois, Missouri and Ohio. Snow was forecast for parts of Kansas, Missouri, Iowa, Illinois, Indiana and Ohio.

Authorities reported three people, including one child, died in weather-related incidents in Missouri.

Two people were killed when a driver lost control on a snow-covered highway in Lebanon on Saturday when the car skidded into a tractor-trailer stopped because of an earlier crash on Interstate 44. The 20-year-old driver survived, but both passengers were ejected and killed.

In Nevada, Missouri, a boy died after falling through an ice-covered farm pond. Emergency crews rushed to the scene Saturday morning after a caller said three children were in the pond, according to fire officials. A bystander pulled one boy from the pond, and another boy was able to get out on his own, The Joplin Globe reported.

Parts of the Southwest dealt with a second day of snow Saturday, while a storm moved across areas of California and brought much-needed precipitation.

Sections of central and northern New Mexico received a record-breaking snowfall Friday and Saturday with more expected throughout the weekend, weather officials said. More snow and rain is expected in the state's north-central and northwest areas, with the impact hitting the northern mountains, meteorologist Todd Shoemake said.

Albuquerque, however, was getting a lighter snowfall Saturday, though residents might not be able to tell. "Most of Albuquerque has had anywhere from 4 to 10 inches of snow. It's really kind of crippled the city," Shoemake said.

The storm system also brought scattered showers as it moved into the central and southern areas of California. Up to a foot of snow could fall through Monday, including in the San Bernardino and Angeles national forests. That follows a spell of dry weather that had some ski resorts talking about closing.

Weather forecasters in Colorado issued blizzard and avalanche warnings as Pacific moisture continued to bring snow and strong winds to the Continental Divide on Sunday. The storm was expected to last through Monday, with another storm expected Tuesday. The National Weather Service issued a blizzard warning for Wolf Creek Pass and the Colorado Avalanche Information Center issued avalanche warnings for the South San Juan, Sangre de Cristo and Gunnison areas. The avalanche danger in southern Colorado has been increased to high.

While some cities were bracing for more snow, others were unscathed as storms roared across the U.S. Saturday and Sunday.

Northern Arizona has evaded getting hit by what was expected to be the biggest winter storm to date.

The National Weather Service said Saturday that snow and rain fell overnight in a scattered fashion across the region thanks to warmer air. Flagstaff, which was expected to get 17 inches of snow by the end of the weekend, received only half an inch in the morning. Meteorologists say warm air heading into central and northern Arizona pushed snowfall to higher elevated areas. But a cold front is expected to arrive on Monday and possibly bring several inches of snow.