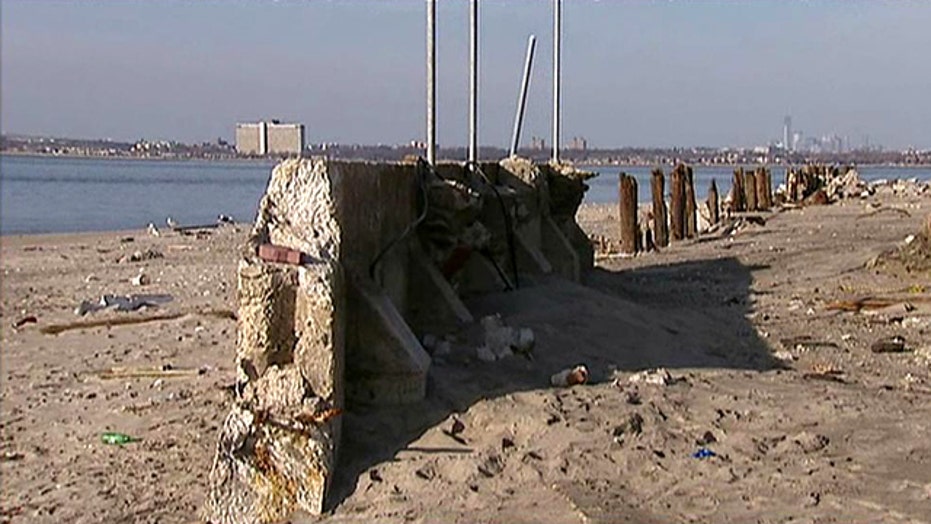 Keith Gordon's house in the private Sea Gate community on the tip of Coney Island in Brooklyn, the one in which he grew up, lived in for 40 years and raised a family, is now just a pile of rubble.

"It's a tragedy that I could never think in the whole world, would happen," he told us as he stood on the beach staring at the debris that remains. Most of the house has vanished, with a few open rooms exposed to the sky amid the jumble of wooden beams and concrete.

"I had a wood bulkhead, a solid wood bulkhead with old railroad ties and a cement top," he explained, as protection against the nearby surf. The seawall held up to other storms for four decades, but fell victim to Sandy.

While planners debate the possible construction of multibillion-dollar storm surge projects in New York Bay far in the future, the residents of Sea Gate say a simpler solution should be built right now: 6 or 7 feet high cement and steel sea walls.

He and others are calling on the government to build a seawall that rings the community, to protect it from the power of the waves slamming into vulnerable homes.

"The force of the waves were just pounding, just like they were breaking in the ocean," says neighbor Barbara Garofalo, who has lived with her family in her home, also for nearly four decades. The Garafalos do not have oceanfront property and still the water ripped through their first floor, but left the house standing.

"We were getting what happens in the ocean...against our homes. There is nothing protecting us, and we desperately need the help."

Estimates say that almost two dozen of 850 homes in the community were destroyed by Sandy.

While Gordon’s home is one that was flattened by Sandy’s wrath, others sustained significant damage, but remain standing. Gordon says the wind ripped the roof off his house, and the ocean destroyed his wooden seawall. His next door neighbor’s concrete and steel seawall, though, is still  intact.

The individual cement and steel barriers that withstood the storm protected the homes from the direct energy of the incoming waves, but not from the flood waters. Yet the houses still stand, say residents, as a testament to how sea walls can provide protection. Gordon says any sea wall construction needs to be unified, and not a piece-meal, homeowner by homeowner project.

"If the government doesn't come in and put up one unified wall, tied into each house, it is not going to work. I could spend whatever money a contractor comes in and says it is going to cost...but if my neighbor doesn't, then the water is just going to rip through his and take everything away again."

Garofalo and Gordon are among the Sea Gate residents hoping the Army Corps of Engineers will take action.

"We're a middle income neighborhood," says Garofalo.  Of her neighbors who lost everything she says, “They can't afford to repair their homes to come back and live in, and put a seawall up. We would like the government to come in and help us do seawalls, to protect the community."

Not everyone agrees the solution is so simple though.

"There are only really two ways to protect houses on the beach," says Budd Griffis, the former New York Commander of the Army Corps of Engineers. He says, "You can make a wider beach, and you can make a higher dune. You can put seawalls in, and anything that you put in front of the house to dissipate energy is going to help, but it is not going to protect it. You are still going to have a problem."

We walked with Mr. Griffis along the Sea Gate beach, and he examined the steel and concrete walls erected by some of the homeowners. He explained that they do protect "from the initial force, but then when the water goes up, you are going to get flooded."

He noted that while some homes behind the concrete barriers are still standing, it is likely they, too, sustained extensive structural damage, possibly beyond repair.

"What they will do is protect the properties from normal storms. It will probably give considerable protection," he says, but adds "when you have, like we have had, two 100-year floods in two years, seawalls don't protect against that kind of disaster."

But the Sea Gate residents welcome any protection they can get.

"We are totally exposed as a community," says resident David Wynn. His house sits on the beach at an open point where the panoramic vista includes the green hills of Staten Island across the bay, to the new World Trade Center tower and Empire State building in Manhattan. He stood next to an old seawall that partially crumbled from the force of Sandy, and says that is proof that a new, reinforced seawall project must be constructed.

"We need at least 800, 900 feet of seawall here, just in this section of Sea Gate...if we had seawalls, we would get flooding, yes. But you would not have the devastation to the houses that we had with this storm. We definitely need some added and new protection."

The Army Corps of Engineers does not have specific plans to install seawalls, but they have been studying the area. Corps spokesman Chris Gardner says there is a sand protection project for Sea Gate in the works, though it has not yet started. The project is focused on T-Groins, rock jetties built perpendicular to the beach, which catch and build up sand along the shore to build up the beach.

"The Corps of Engineers is working with our partners in the city and state to move this project toward construction," says Gardner. "Final plans and specifications and cost estimates for what would likely be a series of T-Groins, for the management of sediment movement, and stand placement in the Sea Gate area are under way. We are hoping to move to construction as soon as feasible."

As for large-scale projects, Gardner says Congress would have to authorize the funds for such a study by the Corps. While there have been calls from New York officials for such action, it has not yet moved to congressional action.

"There is currently no congressional authorization for the large scale storm surge barrier type style project," that have been discussed, says Gardner.

The Army Corps of Engineers did build a hurricane barrier in Providence, R.I., fifty years ago that did protect the city from Hurricane Sandy. The "Fox Point Hurricane Barrier" has gates, which were closed during the storm, and then slowly opened as the water crested with a 7 foot surge. Officials credit the barrier with preventing flooding in the city.

New York City public officials are now proposing similar projects, such as a $16 billion barrier for New York Bay that has been raised as a possibility by City Council President Christine Quinn. While some are skeptical that such massive projects could really be effective, Sea Gate residents point to their proposal of seawalls as an immediate answer to lessen the damage sustained by storms.

"A steel wall must go in," insists Gordon. "One storm, it is gone again. But a steel wall that is maybe, 8 or 7 feet higher, will stop this. It will stop it and protect not only our homes, but the community."

At the Garofalo home, a Christmas wreath is hanging from the balcony as a symbol of hope, but Barbara warns of the next time.

"We are not going to be here. That is what I worry about, the western tip of Coney Island won't be here anymore, and that scares me. I grew up here, my children grew up here, I would like to eventually die here... We lost a whole community, we have been here since 1899, and this has never happened. We need help."

Meredith Amor contributed to this report