Seattle is struggling to pay for bike lanes. (Reuters)

The cost of Seattle's ongoing effort to build bike lanes has ballooned to up to $12 million a mile, in another setback for the progressive city's leadership that has repeatedly spent big on social projects only to realize less-than-stellar results.

Seattle officials are apparently so embarrassed by the pricey cycling routes that they have been conducting quiet "soft launches" for new lanes instead of hosting splashy ribbon-cutting ceremonies, The Seattle Times reported.

Voters in Seattle approved a so-called "Move Seattle" transportation levy in 2015 to the tune of $930M, but the Seattle Department of Transportation (SDOT) has since admitted that the cost estimates it used to pitch the project to voters were not well-founded.

“We do not have enough funding right now to do everything that was promised, we just don’t,” SDOT interim Director Goran Sparrman said in April. “Some of those dollar amounts estimated for what projects would cost were clearly insufficient, even at the time.”

OPINION: SEATTLE CREATED ITS HOMELESSNESS CRISIS -- AND NOW IT'S TRYING TO MAKE IT WORSE

Due to rising infrastructure costs and poor estimates by city officials, Seattle's average for bike-lane building has risen from $1M to $2M per mile, The Seattle Times reported. 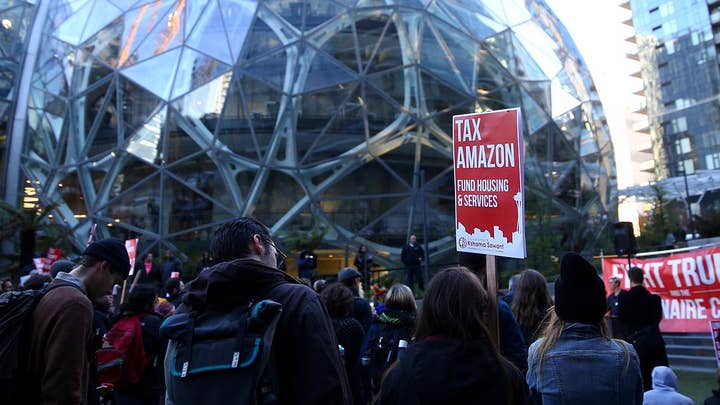 Analysts say the levy estimates failed to properly account for all the added costs of building new bike lanes, including the installation of necessary traffic signals and sidewalk retrofits.

It's a significant comedown for an initiative that Seattle's official website still calls "visionary" for its potential to provide "safer streets, better roads, and more reliable transit options."

But the setbacks haven't deterred the city's cyclists, who converged on Seattle's City Hall on Bike Everywhere Day earlier this month, blocking traffic and demanding even more bike lanes, according to local reports.

The financial missteps are just the latest for Seattle's progressive leadership, which has advanced other expensive social projects that critics have called inefficient and unsuccessful.

And earlier this month, Starbucks and Amazon blasted Seattle's decision to slap a new “head tax” on businesses to pay for homeless services and affordable housing -- saying the government's own lack of efficiency is to blame for the city’s woes.