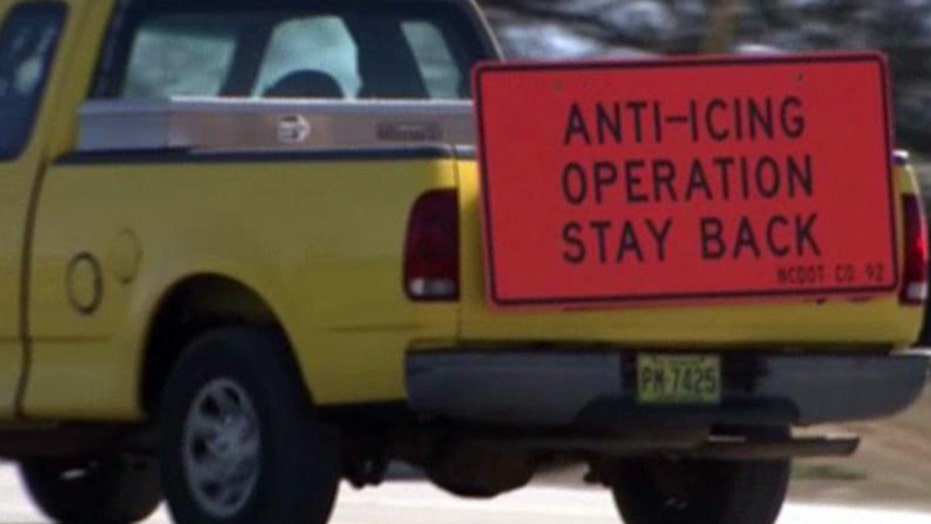 Residents across the Deep South are hunkering down as a rare winter storm is moving in from the central U.S., bringing along freezing rain, snow and forcing the cancellation of thousands of flights.

Officials from parts of Texas to southeastern Virginia are warning motorists to stay off the roads and remain inside. Freezing rain and snow is already falling in some parts of the region.

Popular warm-weather tourist destinations including Charleston, S.C.; Savannah, Ga.; Pensacola, Fla.; Virginia Beach; and New Orleans were expecting ice and snow over the next two days-- rare occurrences in places that seldom even see prolonged sub-freezing temperatures. As many as 50 million people across the region could be affected.

In rural Mississippi, amid warnings about snow and ice, four people died when an early morning fire destroyed a mobile home in Itawamba County, near the Alabama border. Investigators believe a space heater was to blame, and local officials said it was bitterly cold overnight, with temperatures dipping to about 20 degrees. Sheriff Chris Dickinson said nine people were in the mobile home at the time, using the heater for warmth. Officials didn't identify the victims but said they ranged in age from 3 months to 30 years.

In the Hampton Roads area of Virginia -- which forecasters said could see a foot of snow -- store shelves started emptying of staples such as bread by Monday night. Schools and businesses planned to close early, with the storm expected to further clog an already-busy afternoon commute.

Snow began falling before dawn on Tuesday in the extreme northwest portion of Alabama. Forecasters are predicting up to three inches of snow in the central and southern areas of the state, according to MyFoxAtlanta.com.

In coastal Charleston, it was a balmy 62 degrees Monday. But the approaching weather led the College of Charleston to cancel classes Tuesday as a "precautionary measure." There was a forecast of rain, and sleet in the late afternoon, with the first snow expected Wednesday morning.

Much of Georgia was placed under a winter storm warning for Tuesday and Wednesday, including the cities of Atlanta and Macon. While some areas could see as much as 3 inches of snow the bigger concern with plummeting temperatures was ice.

"The snowfall amounts are going to matter very little in this situation because of the ice potential," said Jason Deese, a meteorologist for the National Weather Service in Peachtree City, Ga. "Some parts of the state may end up seeing the greatest impact just because they get more ice than snow."

The airline is offering travelers the opportunity to make one-time changes to their tickets without a fee if they're traveling through Georgia, Alabama, Florida, Louisiana, Mississippi, the Carolinas and Texas. Delta officials expected service to be affected between Jan. 28 and 29, and replacement tickets must be reissued by Feb. 1.

Nearly 3,000 flights were canceled across the U.S. as of Tuesday morning, according to the flight-tracking website FlightAware.com.

The airport hardest-hit by cancellations Tuesday was also the world's busiest: Hartsfield-Jackson Atlanta International, where a total of 863 inbound and outbound flights had been cancelled by 9 a.m. Tuesday, according to FlightAware.

Forecasters were predicting snow and ice from Texas to Virginia by mid-week as precipitation moving in from the south met with cold air already chilling the region. Meanwhile, in the Midwest, plummeting temperatures and increasing winds took root for another day even as the storm moved south. Several states in the central U.S. saw schools and other facilities close for a second consecutive day as dangerous wind chills were predicted. In Minnesota, forecasters said wind chills could reach 35 to 50 degrees below zero.

In the Carolinas, many school districts were running on half-day schedules Tuesday so students could head home before the worst of the storm system hit. In North Carolina's Outer Banks, barrier islands that are popular with tourists during the warm seasons, residents were bracing for as much as 8 inches of snow.

Several inches also were expected in South Carolina, where the state department of transportation planned to send crews out Tuesday to treat roads with sand and brine to ease any troubles caused by ice.

In Charlotte, N.C., Mike Hammond pushed a grocery cart filled with food to his car and looked at the ominous, gray sky.

"You never know what's going to happen," he said. "But I'm making sure I have the staples -- and batteries for my flashlights in case something happens to the power. I want to be prepared."

"This is a very dangerous situation because snow and ice are very rare for extreme southern Mississippi," Robert Latham, executive director of the Mississippi Emergency Management Agency, said in a news release. "We need everyone to have an emergency plan together for this."

In Louisiana, state Public Service Commission Chairman Eric Skrmetta told residents to be prepared by stocking up with food, fueling cars and making sure to have cash on hand, calling the icy forecast for the next couple of days "decidedly grim." State police said freezing rain was falling in the central part of the state early Tuesday, but most highways remained open. The heaviest snowfall was likely to be 1 to 3 inches just north of the Baton Rouge metro area

"They're buying things like canned goods -- nonperishable items -- and bottles of water and diapers for their baby," she said.