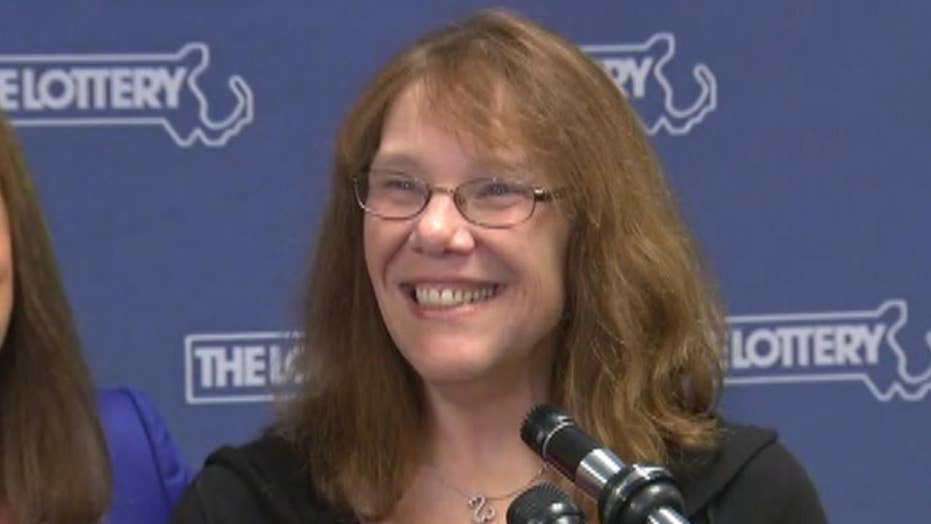 Mavis Wanczyk describes the moment she learned that she won

Massachusetts' newest multi-millionaire and winner of the largest single-ticket Powerball prize in U.S. history has only one plan tonight: hide in bed.

Massachusetts state lottery officials named Mavis L. Wanczyk of Chicopee as the winner of the $758.7 million Powerball Thursday in a press conference.

Wanczyk, 53, said she found out she won the jackpot after she and a co-worker looked at the numbers together after work.

"It's never going to be me," Wanczyk said as she nervously chewed a piece of gum. "It's just a pipe dream that I've always had."

Then she read the number on her ticket and realized she had won.

The newly crowned lottery winner said she plays often -- mostly scratch-offs -- and bought the tickets for luck. She said she chose numbers and had ones picked from random.

"First thing I want to do is sit back and relax," Wancyzk joked in a press conference. The mother of two adult children told reporters that she was an employee at Mercy Medical Center for 32 years, but called them Thursday to tell them she would not be returning.

As for what the Powerball winner is going to do tonight, Wancyzk said, "I'm going to hide in my bed."

A single winning ticket was sold at Pride Station & Store in Chicopee, which is north of Springfield.

The lucky numbers for the second largest lottery prize in U.S. history -- and the largest grand prize won by a single lottery ticket in U.S. history were 6, 7, 16, 23 and 26, and the Powerball number was 4.

The Massachusetts State Lottery initially said the winning ticket was sold at Handy Variety in Watertown, located just outside Boston, but issued a correction at 7:50 a.m., saying the ticket that won the Powerball jackpot was actually sold in Chicopee.

Regardless of the mix-up, Massachusetts appeared to have a lucky night. There were two additional tickets sold in the state valued at $1 million: one at Sandy’s Variety and the other at Handy Variety in Watertown, Fox 25 Boston reported.

The sole winner of the jackpot will likely pay 40 percent or more in taxes, with federal income taxes representing 25 percent and state taxes vary depending on location of the winner. So the winner will likely have to pay out about $300 million.

The current jackpot refers to the annuity option, doled out in 30 payments over 29 years, increasing 5 percent annually, or one lump sum in cash, which in this case would be $480.5 million.

The advantage of taking cash is that people can invest the money with hopes of a greater return than the guaranteed payments they would receive through the annuity. The downside is they'll pay a little more in taxes and won't have the certainty of giant annual paychecks for decades.

The odds of matching all six numbers remain the same, at a miserable 1 in 292.2 million, regardless of the jackpot prize.

However, a larger prize attracts more players and that means more number combinations are selected, so the probability increases that one or more people will buy winning tickets. So, an individual's chances of winning don't increase, but the odds that someone will win do rise.

Tom Rietz, a professor at the University of Iowa who researches probabilities, says it's hard for people to fathom what odds of 1 in 292.2 million mean.

For a better sense, he suggests people envision the 324 million U.S. residents. Your chance of winning is roughly comparable to being that one lucky person out of the entire population, with everyone else losing. Cornelius Nelan, a mathematics professor at Quinnipiac University, puts the odds in perspective by noting they're about the same as flipping a coin and getting heads 28 times in a row.

The Associated Press contributed to this report .