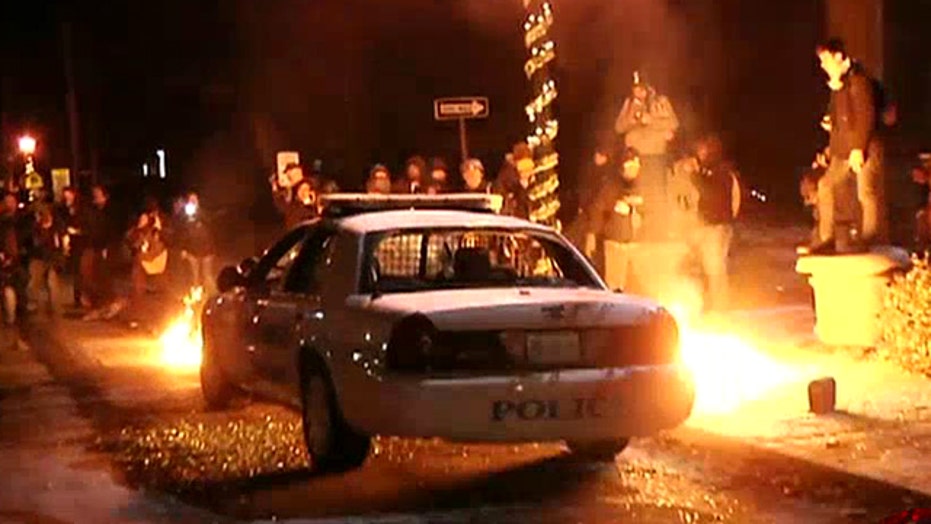 Adam Housley reports on second night of violence in Ferguson

Residents and business owners around the Ferguson, Mo. area remained vigilant Tuesday evening for displays of the lawlessness that ravaged the city 24 hours earlier.

After round of protests police were able to make 44 arrests as protesters returned to the embattled streets of Ferguson. Other than a cop car being torched and another flipped over, protesters' clashes with law enforcement were small.

Four of the 44 arrested received felony charges for either unlawful use of a weapon or assault of a police officer.

Protesters also began throwing rocks and bottles at police before standing in the road as tactical vehicles inched down the road. The unit dispersed tear gas to quell the vandalism and torching of automobiles.

Protesters were told to stay on the sidewalk and if they enter the streets, they would face unlawful-gathering arrests.

Police said another car was set on fire in front of Michael Brown's memorial. At the same time there were reports of gunfire. It was the only gunfire reports of the night.

Police also seized a molotov cocktail in front of city hall along with bottles filled with water and urine. There were no arsons reported.

Outside police headquarters in Ferguson, one woman was taken into custody after protesters threw what appeared to be smoke bombs, flares and frozen water bottles at a line of officers. Several other protesters were arrested after defying police instructions to get out of the street or out of the way of police vehicles.

More than 1,500 National Guard troops joined about 700 guardsmen who were already on the scene to help local law enforcement protect residents and property in the Missouri city, one day after a grand jury declined to hand up an indictment against Ferguson police officer Darren Wilson, who shot and killed unarmed teenager Michael Brown in August.

About 50 protesters in Ferguson converged on a barricade guarded by 30 Guard members. The group chanted "Whose streets, our streets," "This is what democracy looks like" and "Hands up don't shoot," a slogan that has become a rallying cry in protests over police killings.

Outside the city's police headquarters, one woman was taken into custody after protesters threw what appeared to be smoke bombs, flares and frozen water bottles at a line of officers. Two other protesters wearing masks were arrested after defying police instructions to get out of the street.

Other demonstrations were held across the country for a second day. Hundreds of Seattle high school students walked out of classes, and several hundred people marched down a Cleveland freeway ramp to block rush-hour traffic. Other protests, including ones in New York, Boston and St. Louis, were reportedly peaceful.

Also on Tuesday, Wilson made his first public comments since the grand jury decision, telling ABC's George Stephanopoulos there was "no way" Brown had his hands up in a sign of surrender at the time of the shooting, and said he had a "clean conscience" because "I know I did my job right."

Earlier Tuesday afternoon, Missouri Gov. Jay Nixon sternly vowed that a repeat of the chaos in Ferguson -- in which protesters looted stores, vandalized property and set buildings and cars ablaze, drawing a police response that included tear gas and pepper spray -- would not be tolerated.

"No one should have to live like this. No one deserves this. We must do better and we will," Nixon said at a press conference. "Lives and property must be protected. This community deserves to have peace."

Twelve commercial buildings in Ferguson, a city of roughly 21,000 people, were burned down during the protests, and firefighters responded to blazes at eight others, Assistant Fire Chief Steve Fair said. Other businesses were looted, and 12 vehicles also were torched.

There were 61 arrests in Ferguson overnight, many for burglary and trespassing, and 21 in St. Louis, where protesters broke some store windows along South Grand Avenue.

Jon Belmar, chief of the St. Louis County police, said that unless his agency could bring in 10,000 officers, "I don't think we can prevent folks who really are intent on destroying a community."

At a speech to support his executive actions on immigration in Chicago on Tuesday afternoon, President Obama also condemned the violence, saying he had "no sympathy" for the destruction in Ferguson and elsewhere.

"The bottom line is nothing of significance, nothing of benefit results from destructive acts," Obama said.

USA Today, citing family members, said the body of DeAndre Joshua, 20, was discovered in a car Tuesday morning outside the apartment complex where Brown was killed. His family told the newspaper that Joshua's death was tied to the protests, but they didn't know how he died, and the report could not immediately be independently confirmed.

At least 18 people were injured and sought treatment at area hospitals, including someone who was shot and was recovering Tuesday at SSM DePaul Health Center. The hospital didn't give any details about the shooting. Two other people were admitted to Barnes-Jewish Hospital for undisclosed injuries. Everyone else was treated and released.

By midday, a mix of weary unease, fear and hope had set in among locals.

"We're expecting it to flare up again, especially when it gets dark," said the Rev. Dusty Thompson, of Ferguson Church of the Nazarene. "There’s definitely some trepidation for tonight, but we are just praying that peace will be pursued and that our community will come together."

"I'm the only one that didn’t burn," said Dan McMullen, who has owned an insurance company in the Ferguson area for 20 years. "The buildings to the right and left of me burned down. The beauty shop to the left of me is totally flat. It's a 60-year old building made out of concrete and metal."

"I never thought they would burn the place down," said McMullen, adding he fears the violence may continue -- perhaps escalate -- Tuesday night.

"I went to get pictures today from my office in case they try to burn it down tonight," McMullen, a former policeman and Vietnam veteran, told FoxNews.com. "My wife just sat there and cried."

Ferguson Mayor James Knowles on Tuesday afternoon blamed some of the destruction on the National Guard not being deployed quickly enough, and called on Nixon to use all resources possible to ensure "the preservation of life."

Knowles was joined at an afternoon press conference with Ferguson business owners, residents and clergy members, one of whom addressed the violent protestors directly, saying, "This is not the answer to continue to destroy us."

Thompson said surveying the damage in the hardest hit part of the city was troubling.

"I was just up there, and at times you can feel like you're in a different world," he said. "But even in the midst of that damage, there is hope for Ferguson."

Thompson said the shooting and the ensuing fallout has exposed divisions, but also sparked positive conversation.