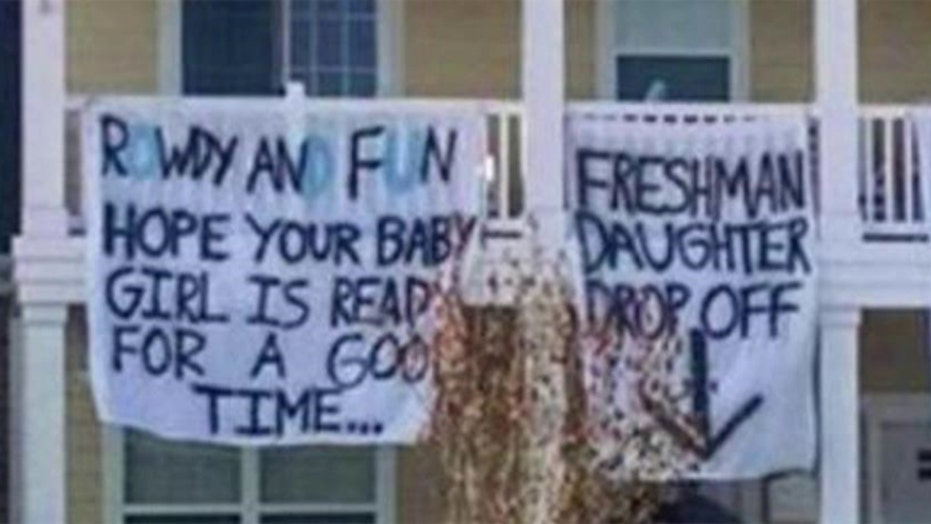 The national office of the Sigma Nu fraternity suspended all activities at its Old Dominion University chapter Monday as it opened an investigation into three sexually suggestive banners that were hung from the front porch of the group's off-campus house over the weekend.

"The Fraternity condemns the derogatory and demeaning language used on the banners," the fraternity's executive director Brad Beacham said in a statement. "Such language has no place in our Fraternity or within any caring community, such as that of ODU." Beacham vowed that any fraternity members deemed responsible for what he called the "reprehensible display" would be held accountable.

The signs were hung over the weekend as newly admitted freshmen were arriving at ODU's Norfolk campus. They read, "Rowdy and fun hope your baby girl is ready for a good time…"; “Freshman daughter drop off”, with an arrow pointing to the house's front door; and "Go ahead and drop off mom too…". Images of the signs were captured in a picture that was briefly posted to Facebook and preserved in a screengrab by the Huffington Post. The Facebook post has since been deleted.

The Virginian-Pilot newspaper reported that a man who answered the door Monday at the house where several members of the Sigma Nu Eta Chi chapter lived admitted that the signs had been made there, but said they had been hung at a different house. Members of the fraternity did not respond to other requests from the paper for comment.

University President John R. Broderick said in a Facebook post that he was "outraged" over the banners and vowed the incident would be reviewed "immediately."

“I said at my State of the University address that there is zero tolerance on this campus for sexual assault and sexual harassment,” Broderick wrote. "Any student found to have violated the code of conduct will be subject to disciplinary action."

Broderick said at least one young student he talked to “thought seriously about going back home” after seeing the “offensive message.”

"Not only do these actions taken by a few individuals undermine the countless efforts at Old Dominion University to prevent sexual assault, they are also unwelcoming, offensive, and unacceptable”

“An incident occurred this weekend that does not reflect the university’s commitment to the prevention of sexual assault and dating violence,” the Facebook message said. “Not only do these actions taken by a few individuals undermine the countless efforts at Old Dominion University to prevent sexual assault, they are also unwelcoming, offensive and unacceptable.”

Rachael Holiday, an ODU sophomore, told the Virginian-Pilot that she saw the banners on Friday while helping new students move in. She said most of the parents she spoke to wanted the banners taken down and told her they were thinking of pulling their daughters out of the school.

Sexual assaults against women on college campuses have become a hot-button topic. Several states, including New York and California, have adopted a “yes means yes” policy of affirmative consent for sexual interactions, a change which some critics think could lead to more men being accused of sex assaults where they may not have been committed. In addition, a recent Rolling Stone magazine article about an alleged fraternity gang rape at the University of Virginia, was ultimately revealed to be a hoax.

The Department of Education's Office for Civil Rights has also opened an investigation into more than 100 colleges and universities over their handling of sexual assault complaints. Old Dominion is not one of the schools under investigation.