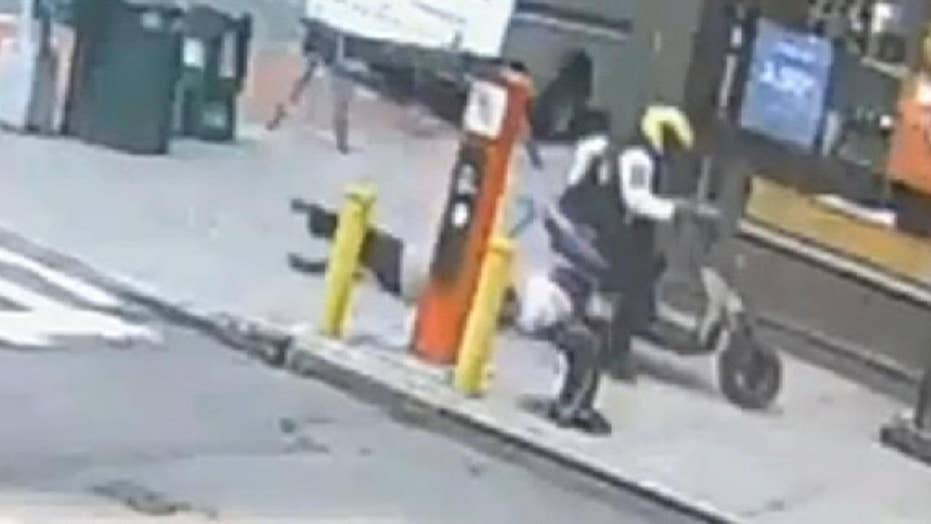 Raw video: NYPD offers reward for information leading to the arrest of a suspect who was caught on surveillance camera dragging an 86-year-old woman during a robbery attempt in Manhattan.

A scooter-riding thief was captured on camera grabbing an elderly woman's purse before dragging her down a Manhattan sidewalk, New York City police said.

The brazen bandit was seen riding an electric scooter around 3 p.m. on May 4 on the corner of 1st Avenue and 64th Street on the Upper East Side.

FLORIDA MAN, 88, CARJACKED AT GUNPOINT WHILE ON HIS WAY TO BUY MOTHER'S DAY GIFT FOR WIFE

In surveillance footage released by the New York Police Department, the would-be thief, in a bright yellow helmet, appears to try to steal the 86-year-old woman's purse. As the person tries to ride away, the woman is dragged on the pavement for several feet.

The victim was treated at a nearby hospital for pain in her left arm, AM New York reported.

Investigators said a $2,500 reward has been offered for information leading to the arrest of the scooter-bound suspect, who is wanted for "multiple robberies."

Anyone with information is urged to contact the NYPD Crime Stoppers at 1-800-577-TIPS.