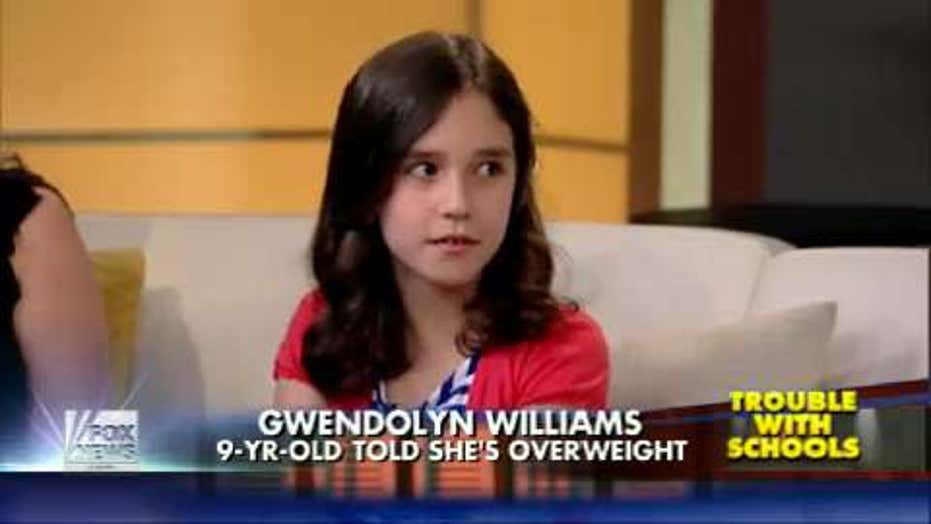 A New York City mom was fit to be tied Wednesday after her 4-foot-1, 66-pound daughter came home from school with a note calling her fat.

Eight-year-old Gwendolyn Williams is anything but fat, but her mom worries that the school's note, citing her body mass index, has left her daughter confused about her body.

"My daughter is thin; she knows she doesn't have a weight problem, but that night, I caught her grabbing the skin near her waist, and she asked me, 'is this what they were talking about?"' Laura Bruiji Williams, the girl's mom, told FoxNews.com. "It was awful to see."

Gwendolyn, along with her classmates, were handed a "Fitnessgram" sealed with a sticker at her public school in Brooklyn. The class was told not to open the letters, issued by the New York City Department of Education, but like most of her friends, she couldn't resist and read it.

"Some of her friends found out they were obese," her mom said. "They were crying."

The New York Post first reported that Williams approached the school's principal to complain about the letter. The principal was sympathetic, but reiterated that students were given the instructions not to read the letter.

The so-called "Fitnessgrams" are issued annually in New York City by the department. They are intended to assess students from grades K-12 to help support lifelong health, according to the department's website. About 870,000 students each year take home these reports.

"With body image such an issue, it's amazing to me that these letters weren't mailed to parents," she said. "What kid's not going to open that?"

The BMI report value in assessing health has been criticized. Gwendolyn is 4'1 and weighs 66 pounds.

"My organization and others believe that BMI report cards have no place coming from schools and can be more harmful than helpful," Chevese Turner of the Binge Eating Disorder Association, told The Post.