The U.S. Geological Survery upgraded its previous volcano warning from "orange" to "red," signifying that an "eruption is forecasted to be imminent with significant emission of ash into the atmosphere likely," or that an eruption is already underway.

“At any time, activity may become more explosive, increasing the intensity of ash production and producing ballistic projectiles near the vent," local officials told Fox News amid the alert, which was issued just before 1:30 p.m. local time.

This photo from the U.S. Geological Survey shows activity at Halema'uma'u Crater that has increased to include the nearly continuous emission of ash with intermittent stronger pulses at Hawaii Volcanoes National Park on the island of Hawaii at around 9 a.m. Tuesday, May 15, 2018. (U.S. Geological Survey)

Nearly 20 fissures have opened since the Kilauea volcano started erupting 12 days ago. On Monday, another fissure spewing lava and unhealthy gas opened up, and a crack in the Earth that emerged a day earlier was sending molten rock on a slow run for the ocean, officials said.

The eruption has destroyed about two dozen homes in the Leilani Estates subdivision on the Big Island. 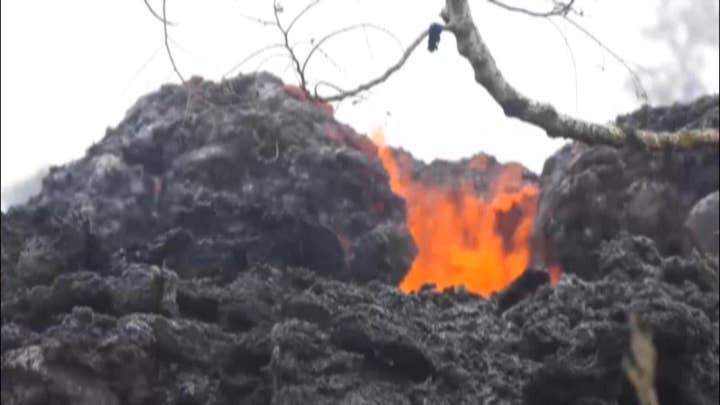 Volcanic air pollution and ashfall have been reported in Pahala, and National Weather Service radar and pilots have reported the top of the volcano's ash cloud is 10,000 to 12,000 feet above sea level.

“I had to stop and take a picture,” she said. “That was a few hours ago. God knows what it looks like now. My kids and my mother are up there now.”

Down Highway 11, the main artery connecting the east and west side of the Big Island, a string of cars sit near the entrance of Volcano National Park. Though the park is closed, vacationers and some locals watch the ash fall from there.

“We’re not sure if it’s safe but it’s amazing,” Paul Rodaeo, a visitor from Oregon, said. “There really isn’t much more that’s open.”

The explosion sent an ash mushroom cloud downwind, dusting communities as far as 20 miles away.

“I had no idea until a friend stopped by and said look out the window,” Bridgett Fraser said.

Hawaii Electric Light said a light dusting of ash and moisture on utility insulators could result in electrical short circuits.

“If this occurs, we are prepared to respond once it is safe for employees to work in the impacted area," said Rhea Lee-Moku, spokeswoman for Hawaii Electric Light, said in a statement. "While we have equipment that can wash off ash from utility equipment, this is the first experience we will have with widespread volcanic ash.”

Nearly 2,000 people have been told to evacuate since May 3.