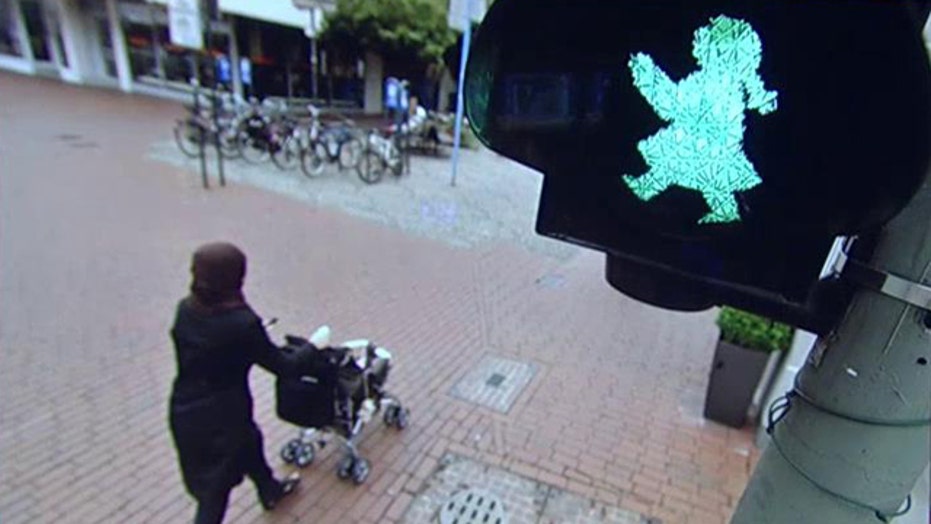 Should crosswalk signals be gender-neutral?

Gender neutrality has become not just a civil rights issue in America in 2016 — it’s become an enticing income stream.

Companies large and small are creating gender-neutral products and policies to satisfy a very small minority of people who perceive bias and take offense where none exists.

Or, as Americablog put it about the pending profits for those who adopt the LGBT agenda, “Coming out as pro-LGBT equality is actually pretty great marketing. The McCulture War is increasingly being won by The Gays.”

Last weekend, retail giant Target unveiled a new brand of kids’ home decor called Pillowfort. Its focus is gender-neutral palettes and designs, and themes for the new products include “Tropical Treehouse,” “Stellar Station,” and “Ocean Oasis.” The store asserts this is to express gender neutrality.

"Our design team works with customers in our stores, right next to them in the aisles and in their homes, too," Amy Goetz, a Target spokesperson, told LifeZette. "We are trying to offer more pieces that can be moved from one room to another easily in more neutral colors. We still offer pinks and blues for boys and girls, too."

Goetz added, however, that "we are terming it gender neutral." She said all new designs will include arrows and dinosaurs.

Translation: Target is bowing to a PC culture that frets and obsesses about any perceived gender classification, including the biological differences between males and females.

"The LGBT groups have great influence in big corporations," Tim Wildmon, president of the American Family Association, told LifeZette. "People at the top don’t know how to respond, and let’s put it this way: If you are called a homophobe, your career is over.

"LGBT groups and individuals within corporations exert pressure on management. The idea is 'show me you’re not a bigot.’"

This follows Target’s decision last August to dump any signs in the toy and bedding sections that labeled products by gender. This came after Abi Bechtel of Ohio took to Twitter to raise the issue, protesting a sign at Target for a "Girl’s Building Set."

All of this completely confuses the issue, a Boston mom told LifeZette.

"Parents used to have more toughness and not complain about everything. Do we just have too much free time now, or what? If you want a boy toy for your little girl, go to the boy aisle and get it. Do we have to change everything just because one thing isn’t exactly as you want it?" she said.

"Here's the fallacy behind mainstreaming gender-neutrality: The real prevalence of children with gender-identity issues is extremely low," pediatrician Meg Meeker, who has been treating children and adolescents for 30 years, told LifeZette.

Blurring the gender lines has been enthusiastically supported by retailers, however. Northface is now offering more unisex designs, and top designers like Marc Jacobs are offering more androgynous clothing, too.

"If a guy wants to go out and buy a woman’s scarf and thinks that’s fashionable, whatever his sexual preference, it’s going to happen," Marshal Cohen, chief industry analyst at research firm NPD, told The New York Times. "This is something where the world jumped ahead of retail, and now retail is trying to catch up."

In middle schools and high schools, a new language is being promoted by LGBTQ student clubs. It would replace the gender-specific pronouns he/she, him/her, and his/her with "zie," "zim," and "zir."

Several U.S. high schools are also changing their graduation gowns to gender-neutral options, creating a sea of PC-based sameness on the special day that's meant to focus on academic and extra-curricular achievement.

In an even more ridiculous scenario, one writer believes doctors should blur a child’s sex in hospital delivery rooms.

"This treatment is performed almost universally without even asking for the parents' consent, making this practice all the more insidious," said Cristin Scarlett Milloy in Slate.com. "It's called infant gender assignment: When the doctor holds your child up to the harsh light of the delivery room, looks between its legs, and declares his opinion: It's a boy or a girl, based on nothing more than a cursory assessment of your offspring's genitals."

Just this week, University of Florida professor Jennifer Lee revealed in the syllabus for her class, "Creativity in Context," that she wanted to discard certain traditional labels — like mom, dad, husband and wife.

"Use inclusive language," the syllabus for the class reads under the section "Classroom Communications Policy and Guidelines."

"Speak in a way that does not make assumptions about others based on 'norms,' stereotypes, or one’s own identity or experience. Using terms like 'partner/ 'significant other,' rather than boyfriend, girlfriend, husband, or wife — or 'family' rather than mom or dad — is inclusive of alternative orientations and family structures, and free of stereotypes."

Lauren Record Bennett, who lives outside Boston, wondered just how far all this gender-scrubbing will go.

"Will we now see a backlash of people being disgusted at girls who wear pink or boys who prefer blue?" she told LifeZette. "Does everything have to be so homogenized out of fear of being offensive? I actually find that offensive."

Celebrating God in the Great Outdoors

Being Present in the Digital Age

Parents Alone in the Pew