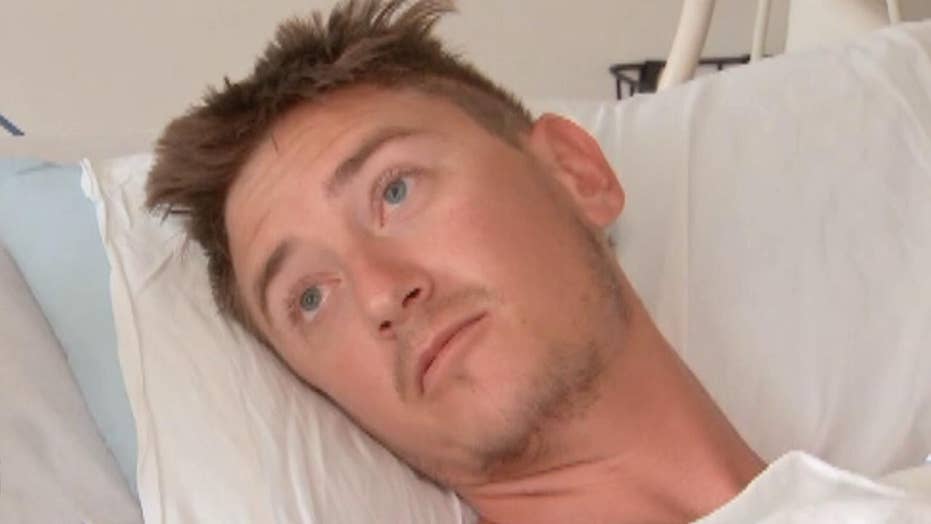 Dustin Theobald was at a Fernandina beach in Florida playing with his son on a surfboard in just 2 feet of water when he felt something tug at his foot.

The 30-year-old dad looked down and saw a large fish. When he touched its rough skin, the Florida man knew he was in trouble.

"It wasn’t like fish skin. You know shark skin has a rough edge," Theobald told WJAX-TV.

The man believes the 4-foot nurse shark bit him as he attempted to kick it out of the way while heading back to shore. Theobald immediately saw blood in the water.

The Fernandina Beach Fire Department arrived at the scene three minutes after getting reports about the shark attack. Minutes later, they were alerted to a separate shark-related injury in the area. A 17-year-old Georgia man was reportedly bitten in waters about a mile away from the first incident.

Fernandina Beach's Division of Ocean Rescue closed all beaches in the area Friday, with officials posting double-red flags at beach entrances. The city reopened beaches the following morning, with officials warning they were on "high alert."

Theobald was rushed to a nearby hospital and was later transferred to UF Health Jacksonville for surgery. He was released from the hospital Tuesday afternoon.

"Due to this tragedy he is expected to be off his foot for at least 6 weeks. Throughout that time he will be going through physical therapy to regain feeling and strength in his foot and toes (as ligaments were torn)," Theobald's brother, Cameron, wrote on a GoFundMe page, which will be used to raise money to cover medical expenses.

While it was a scary incident, Theobald said it won't prevent him from going back into the water.

"It's crazy that it happened, on Friday the thirteenth no less, but don't let this scare you from getting in the water. This is a one and a million thing and i promise you it won't stop me," he wrote in a Facebook post, sharing several photos of his gruesome wounds. The graphic images were shared by more than 1,150 people as of Tuesday evening.

Florida is no stranger to shark incidents. There were 32 reported shark attacks in the state in 2016, according to the Florida Museum International Shark Attack File's latest report. From 2007 to 2016, there was a total of 243 attacks — including one fatality.