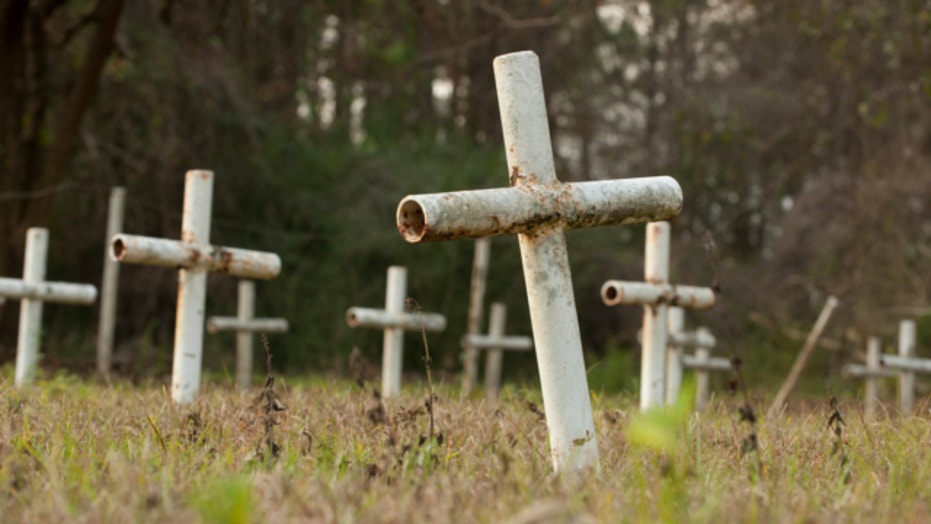 Florida authorities announced Thursday they will officially begin examining the grounds of a former boys reform school in Florida in mid-July to determine if it was a crime scene where dozens of former students may have died and been buried.

State officials will survey the entire 1,200-acre campus of the Dozier School For Boys in Marianna, where hundreds of boys were beaten and abused since its opening in 1900 after researchers found 55 burials on the school's grounds in 2012.

University of South Florida assistant professor of anthropology Dr. Erin Kimmerle exhumes a grave at the Boot Hill cemetery at the now-closed Arthur G. Dozier School for Boys in Marianna, Fla., back in 2013. (REUTERS/Edmund D Fountain/Pool)

Workers discovered 27 potential "clandestine" graves near the official school burial grounds in April, prompting the state to allocate $850,000 to Erin Kimmerle, a forensic anthropologist at the University of South Florida and her team of researchers who previously surveyed the site on behalf of the state in 2012. The new, extensive survey will use radarlike laser mapping data to determine if there is any need for a deeper probe on the grounds, where at least 100 boys may have died between 1900 and 1973, according to reports by the Tampa Bay Times.

Dozier, which closed in 2011, was intended to be a reformatory school for boys who had brushes with the law or other behavioral issues to "receive careful, physical, intellectual and moral training.”

Instead, it became a campus where boys lived in segregation, blacks on the north side and whites on the south, and were sent to the White House, a disciplinary cinder block building where guards brutally beat youngsters with straps of leather and metal. Some boys were even sexually abused in a separate room deemed the "rape room."

FILE 2013: Researchers found some of the remains of 55 people in a graveyard at the Arthur G. Dozier School for Boys in Marianna, Fla. (AP/Ho, University of South Florida Anthropology Team)

The U.S. Department of Justice reported “systemic, egregious and dangerous practices exacerbated by a lack of accountability and controls,” which forced the closing of Dozier in 2011.

Gov. Ron DeSantis has thrown his support behind initiatives to uncover deaths, abuses, or wrongdoings at the school, saying “This is a subject that this administration takes very seriously, and we will handle it correctly."