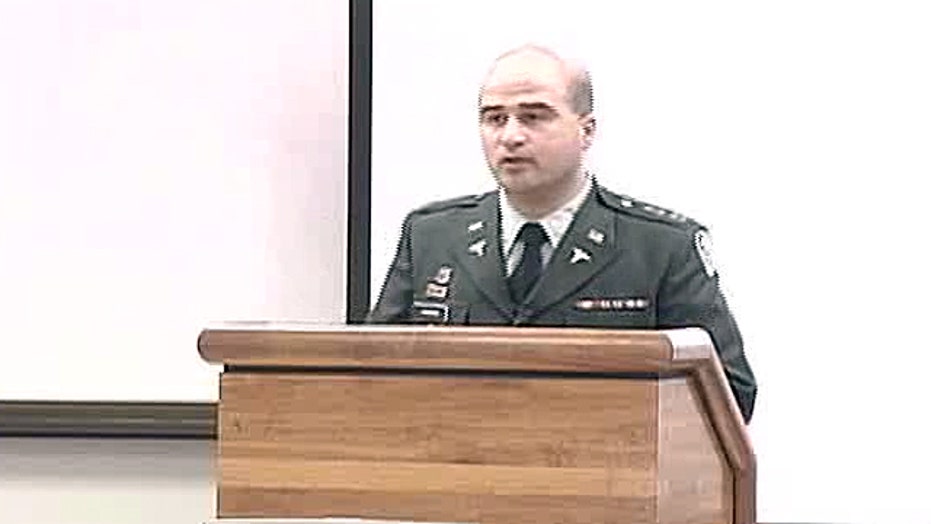 Raw video: Hasan's controversial PowerPoint presentation of 'The Koranic World View as it relates to Muslims in the US Military' at Walter Reed Medical Center

Fort Hood killer Nidal Hasan, in video footage exclusively obtained by Fox News, told colleagues at Walter Reed Medical Center in 2007 that Muslim soldiers should have the option of being released as conscientious objectors to reduce the prospect of "adverse events."

Hasan, a Muslim and an army psychiatrist, went on two years later to kill 13 and injure 32 in a shooting barrage at the Fort Hood military base in Texas. He was sentenced to death by a military jury on Aug. 28.

"I think the Department of Defense should allow Muslim soldiers the option of being released as conscientious objectors to increase the morale of non-Muslim soldiers in the military as well as decrease adverse events," Hasan says in the video during a PowerPoint presentation.

Bearing an FBI logo, and subtitles, Hasan's presentation titled "The Koranic World View as it relates to Muslims in the US Military" was provided to the defense as part of the discovery process in the Fort Hood case.

In the early morning hours before he was flown from a Texas jail cell to military death row at Fort Leavenworth in Kansas to await execution, though, Hasan asked Galligan to release the remaining two sections exclusively to Fox News. The entire videotaped presentation with an FBI logo was provided to the defense as part of the discovery process in the recently concluded Fort Hood case.

In the video, he is standing before his uniformed colleagues as an Army psychiatrist. Hasan presented one section with a slideshow where he emphasized anti-Semitic remarks under a category of "Lack of Submission."

Hasan said: "I choose this story because it is familiar with a lot of people and sometimes shown in the media, where if you don't submit to God -- and this was a story of the children of Israel, when they were, God said, 'Revolting, persisted on working on the Sabbath,' and he turned them into apes and pigs."

After the nervous laughter elicited from the audience about the number of virgins in paradise, Hasan went on to elaborate:

"I am going to read this out because I personally like it, but it personally depicts a scene in Heaven, according to the Koran. 'And their recompense shall be paradise and silken garments because they were patient. Reclining therein on raised thrones, they will see there neither the excessive heat of the sun nor the excessive bitter cold. And the shade thereof is close upon them, and the bunches of fruit thereof will hang low within their reach, and amongst them will be passed round vessels of silver cups of crystal; crystal-clear made of silver.'"

Toward the end of the nearly hour-long presentation, an unidentified audience member finally spoke up with a question focusing on what Hasan's  statements had to do with mental health care for U.S. soldiers. The exchange shows Hasan not answering but instead trying to draw attention to murderous attacks of another U.S. soldier in 2003 in Kuwait.

The audience member said: "I'm a bit confused about what the intention would be other than identifying those who might have conflicts with that and getting them the appropriate spiritual counseling, which is separate from [UI] mental health care."

Hasan answered: "I think that might be enough. In the case of Hasan Akbar, the articles that I read, that wasn't even done."

Shortly after that comment, Hasan was thanked and received a round of applause.

In a strange twist, Hasan Akbar, who was convicted of killing two fellow soldiers in Kuwait, is one of the  five inmates Hasan will join on military death row. No active duty soldier has been executed by the military courts system since 1961.

In the video, Hasan appears to be wrestling with his own issues, and whether Muslims can serve in the military as the U.S. engaged in the Iraq and Afghanistan wars.

"We always talk about God and country, but here we're talking, we're really talking about God versus country," Hasan said.

"He sounds like he's just trying to explain how other people might think, but as you listen and as it progresses you begin to hear...him,"  Matthew Levitt, Director of the Stein Program on Counterterrorism and Intelligence at The Washington Institute for Near East Policy told Fox after reviewing the video.

"He seems to have already begun the process of radicalization."

According to the Senate report "A Ticking Time Bomb," which exhaustively investigated the Fort Hood massacre, Hasan's 2007 Walter Reed presentation went through several drafts because it was not considered scholarly or scientific.  One supervisor described the Army psychiatrist as quote "very lazy" and "a religious fanatic."

During the presentation, Hasan also stated as fact that former soldiers are joining the ranks of terrorists.

"There's a lot of soldiers, that once they actually leave the military, they're actually joining or trying to join groups like the Taliban and al Qaeda and so you have to ask yourself..there's something out there with these groups that's really resonating," he said.

"The Fort Hood tragedy did not have to happen. Major Hasan had a significant accomplice when he pulled out his weapons and started shooting down unarmed innocents -- and that accomplice was political correctness in our military."

In the video released to Fox News, Hasan is also asked about the number of virgins in paradise, provoking nervous laughter from the audience.

The Washington Post's Dana Priest broke the story of Hasan's controversial power point presentation within days of the Fort Hood massacre, but video of the event, allowing Hasan to be heard in his own words, has not been publicly available.

Hasan was promoted from Captain to Major in 2009. After the massacre, nine of Hasan's supervisors were reportedly reprimanded for leadership failures.

There was no immediate comment from the Walter Reed press office on changes they've made in light of the Hasan case.

A year after the Walter Reed presentation, in December 2008, Hasan wrote an email to the radical cleric Anwar al Awlaki who became the first American targeted for death by the CIA. As part of its four-year investigation, Fox News has shown the cleric used over 60 email accounts to connect with his followers.

"There are many soldiers in the U.S. armed forces that have converted to Islam while in the service. Some appear to have internal conflicts and have even killed or tried to kill other U.S. soldiers in the name of Islam," Hasan wrote. "....can you make some general comments about Muslims in the U.S. military..."