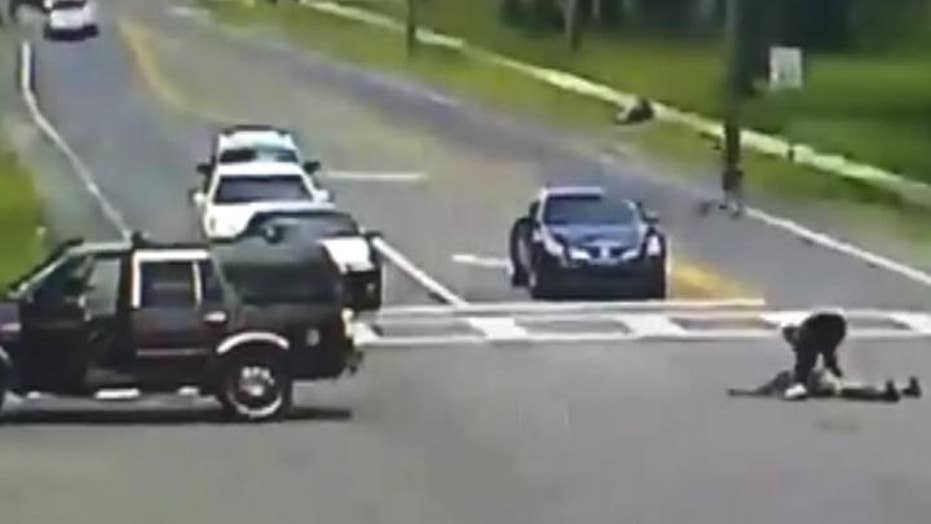 Surveillance video shows a woman who appears unconscious fall out of the passenger side of a SUV and be dragged back to the vehicle by the driver.

A harrowing video shows a woman falling out of a moving SUV at a busy Florida intersection on Monday before the driver exits his vehicle and helps her get back in the car.

The Hillsborough County Sheriff’s Office said the “disturbing” incident occurred around 4:12 p.m. in the middle of a Tampa intersection.

In the video, a burgundy Ford Expedition is seen driving through the intersection of East 131st Avenue and North 15th Street when an unidentified woman appears to fall out of the passenger side.

The woman does not appear to move in the video and investigators said she could be injured or unconscious.

An unknown man is then seen emerging from the driver’s side of the SUV, going to the woman and picking her up. He then drags her back to the SUV and places her inside before driving off.

Other vehicles and pedestrians nearby did not appear to react to the woman falling out of the SUV.

Officials said they checked local hospital and the area but were unable to locate her. Detectives released the surveillance video in hopes that someone can recognize the vehicle, the woman or the driver.

Anyone with information is asked to call the Hillsborough County Sheriff’s Office at 813-247-8200.