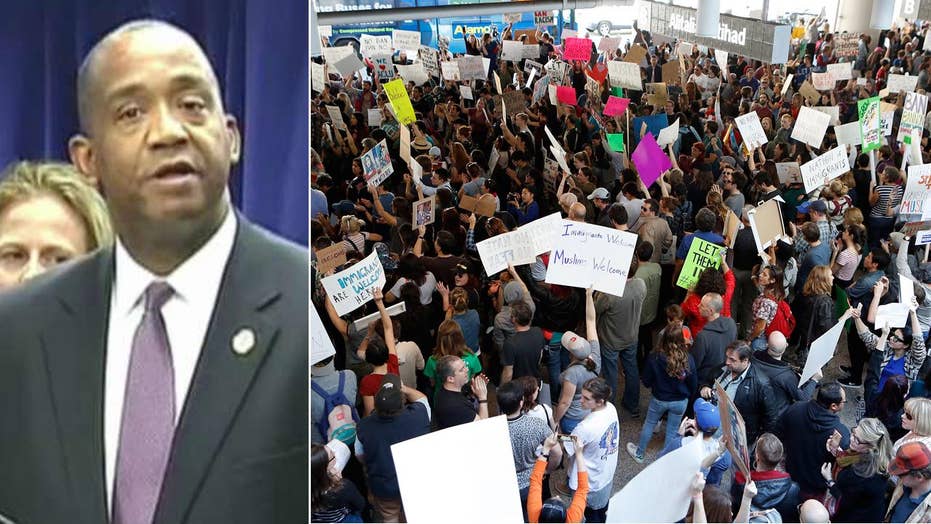 Federal judge orders US to let in immigrant visa holders

SEATTLE – An Afghan family that traveled to the U.S. on special visas and was detained by immigration officials at the Los Angeles airport in March received status as permanent residents Thursday, their attorneys said.

A spokesman for the law firm representing the family, Joshua Busch of Public Counsel, said the family had final interviews Thursday with U.S. Customs and Border Protection in Washington state, which determined they were eligible to use those visas to remain in the United States. The special immigrant visas are given to foreigners who work for the U.S. military in their countries.

"We're thrilled that the family has been admitted into the United States," Public Counsel senior staff attorney Talia Inlender said in a statement. "But this decision only confirms that the detention of this family, and the actions of Customs and Border Protection, were completely unjustified."

The mother, father and their three young sons arrived at the Los Angeles airport March 2 for a connecting flight to Washington — where they plan to settle — but they were detained and split up.

Lawyers said the father was held at a detention center while his wife and young sons — one who was 8 months old — were initially held at a separate detention center and later a hotel. Immigration officials planned to send the mother and children to a Texas detention center, but lawyers intervened and a federal judge quashed the transfer.

The family was reunited and released from custody a few days later pending the April interviews.

The case came as President Donald Trump was stepping up immigration enforcement with a travel ban suspending visas from seven Muslim-majority countries. Afghanistan was not listed in Trump's executive order, which caused chaos at airports nationwide before it was blocked by federal courts. The Trump administration is appealing in that case and in another involving his reworked travel ban, which has also been temporarily blocked.

Lawyers said the family shouldn't have been subjected to such treatment after going through a lengthy process to obtain special immigrant visas.

The father of the family worked different jobs for the U.S. military in Afghanistan for more than a decade and was assaulted and shot during his time there, his lawyers said.

"We are gravely concerned about the actions of the government in this case," Inlender said. "There is little oversight of CBP, who appear emboldened to act with disregard for people's rights."

Lawyers said the family wishes to have their identities remain private.