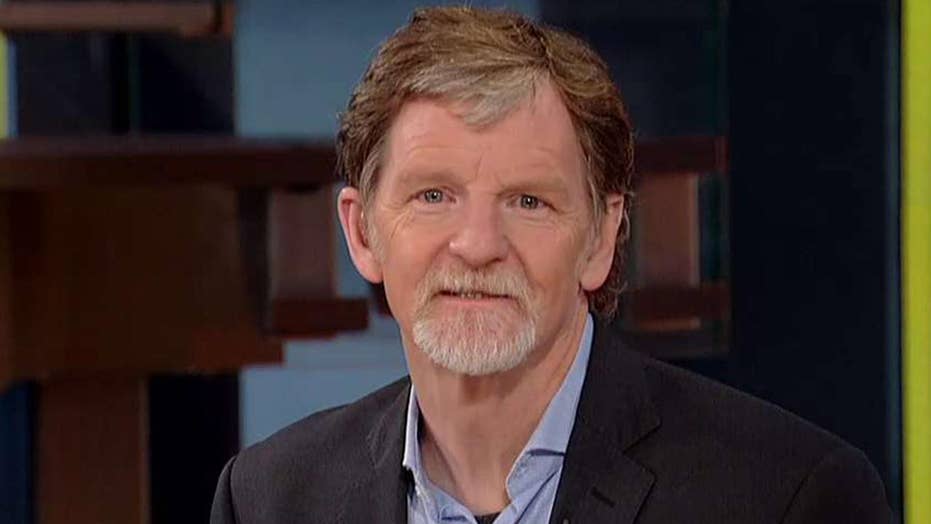 Jack Phillips reacts to ruling on his refusal to create a wedding cake for a same-sex couple, says it is a 'big win' for 'creative professionals' who can now practice their work without fear of punishment from the government.

Jack Phillips, the unlikely plaintiff in a case that went all the way to the highest court in the land, said he's ready to get back into the wedding industry.

"It was a big win for us," said Phillips in an interview with Fox and Friends the day after the ruling. "And now we're just looking forward to hopefully being back in the wedding business and we'll see how the court ruling affects that."

When word came down Monday morning that U.S. Supreme Court Justices sided with him in his six-year fight defending his right to deny a wedding cake to a same-sex couple, Phillips was relieved.

Phillips lost 40 percent of his business after the initial lawsuit was filed six years ago. He has since been forced to lay off workers. He said he hopes the ruling will boost business.

But the way in which the 7-2 opinion was grounded leaves much in the air, according to Fox Senior Judicial Analyst Judge Andrew Napolitano.

“There will be many more of these cases filed because the problem with the decision yesterday is it doesn’t resolve the issues,” he said. “It invites challenges and litigation on these issues and I think you’ll see those beginning to pop up all over the country.”

In 2012, fiancés Charlie Craig and David Mullins attempted to order a cake to celebrate their upcoming wedding, from the Masterpiece Cakeshop, in Lakewood, Colo. Phillips, the owner, told them he would sell them any other baked goods in his store, but would not design a wedding cake because it was in conflict with his Christian beliefs.

Craig and Mullins filed a complaint with the Colorado Civil Rights Commission, which ruled in their favor, as did the Colorado Court of Appeals.

In its determination in favor of Phillips, the high court did not alter Colorado's anti-discrimination law, instead the case turned on the way in which the baker was treated by the commission.

Writing for the majority, Justice Anthony Kennedy wrote, "...some of the commissioners at the commission's formal, public hearings endorsed the view that religious beliefs cannot legitimately be carried into the public sphere or commercial domain, disparaged Philips' faith as despicable and characterized it as merely rhetorical, and compared his invocation of his sincerely held religious beliefs to defenses of slavery and the holocaust."

Craig, Mullins, and the ACLU, which assisted in the case, agreed, on that part of the decision.

"We never disagreed about his religious convictions,” Craig said. “We just think when you open the doors to the public, you have to serve everyone equally."

Kristen Waggoner, Phillips attorney, insists this isn't about discrimination, but religious freedom, which she said the high court affirmed.

Jack Phillips said he lost 40 percent of his business after the initial lawsuit was filed six years ago. He has since been forced to lay off workers. He said he hopes the ruling will boost business.

“Jack loves and serves anyone who walks into this store, all walks of life but he's never promoted all messages through his cakes. He's declined a number of different cakes – Halloween messages, cakes that would celebrate divorce."

With the ruling so specific to failed transaction between the parties, and the way in which one was treated by the commission, it leaves opportunity for Phillips to receive an almost identical request, should he begin designing cakes for weddings, once again.

"It's my understanding if another same sex couple walks into this job, he still has to serve him just like he has to serve anybody else, " Craig said.

Napolitano says SCOTUS may soon see a similar case on its docket.