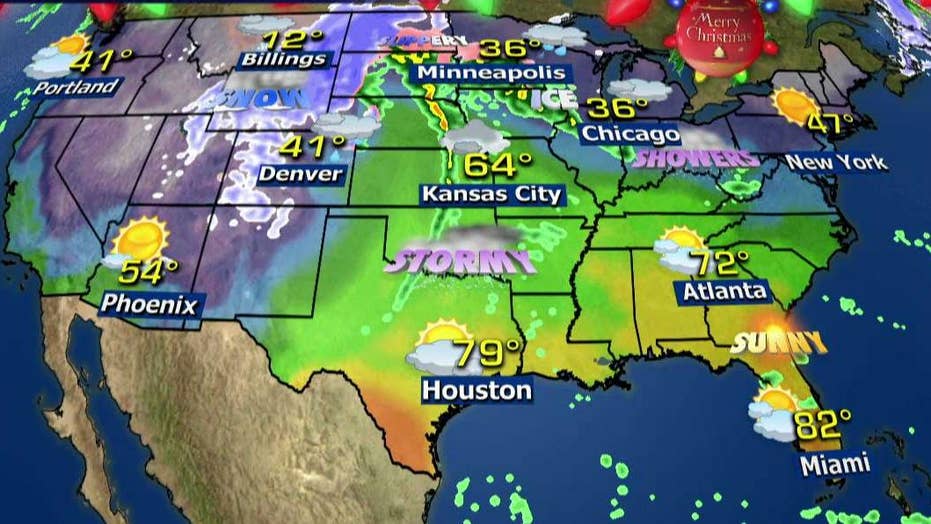 Rick Reichmuth has your FoxCast

CHICAGO – It's been a white -- but slick and messy -- Christmas for the northern Plains and some Western states.

Most of the Dakotas and southwest Minnesota had turned into a slippery mess due to freezing rain Sunday morning before snow arrived later in the day as temperatures fell.

"Between the ice and snow, and winds howling like crazy, there will be nothing moving" until late afternoon Monday, said National Weather Service meteorologist Greg Gust in Grand Forks, North Dakota. "Then it's dig-out time."

A blizzard warning was in effect for most of North Dakota, western South Dakota and a small section of eastern Montana through Monday, with expected snow totals of 8 to 15 inches and winds up to 55 mph.

The South Dakota Department of Transportation announced the closing Sunday night of Interstate 90 from the Wyoming border to Chamberlain -- a stretch of about 260 miles. "The freezing rain from earlier today and dropping temps have created icy and slushy roadways; falling snow and increasing winds are creating zero visibility conditions in the west," the department said in a statement.

The North Dakota Transportation Department closed a 240-mile stretch of Interstate 94 Sunday night, from the Montana border to Jamestown. A 100-mile stretch of U.S. Highway 83 between Bismarck and Minot also was closed due to drifting snow and near-zero visibility.

Up to a 1/2 inch of ice could accumulate in central Minnesota, and the weather service has said anyone who "must travel" should have an extra flashlight, food and water.

In southeast Nebraska, high winds were cited as the likely cause of about 800 Omaha Public Power District customers losing power Sunday, the Omaha World-Reported.

Rain and possible storms were due to move through parts of Kansas, Missouri, Texas, Oklahoma and Nebraska on Sunday.