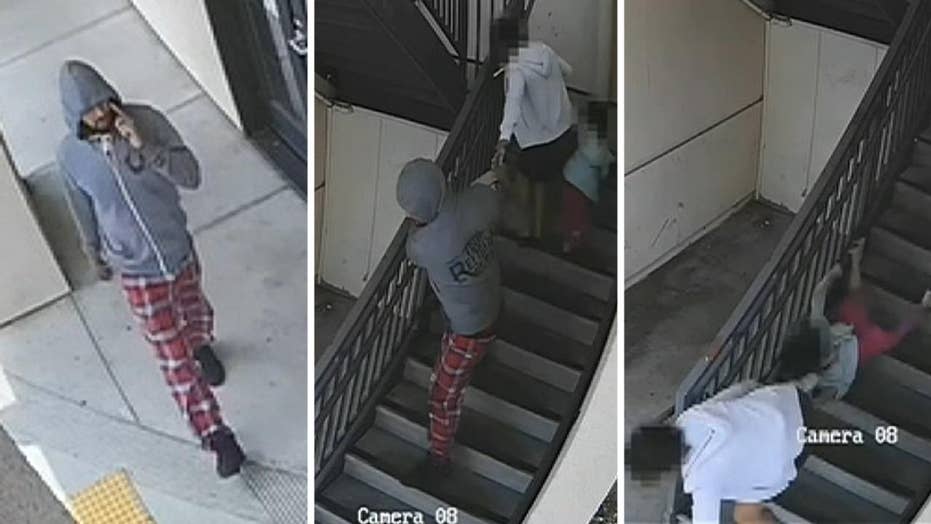 Raw video: San Jose Police Department shares surveillance footage of violent purse snatching where the suspect yanked a woman and child down a set of stairs.

A man in Northern California has been arrested after a violent purse snatching captured the moment a woman and her daughter were dragged down a flight of stairs earlier this month, officials announced.

The San Jose Police Department said in a news release Tuesday that Pablo Cabrera was arrested Saturday at his home in San Jose after he was identified as the suspect based on his description, vehicle, and method of operation.

“We are fortunate this predator was caught before any more members of the public were victimized,” San Jose Police Chief Eddie Garcia told KTVU. “It’s just horrifying to watch that this guy is preying on women who are by themselves or in this case with a young child."

Authorities were able to link him to other robberies based on evidence recovered in his apartment described by Garcia as "ambush" attacks. All of the victims were Asian females carrying expensive purses.

"Cabrera attacked victims from behind, grabbed their purse, and ran to his car," police said.

A man identified by police as Pablo Cabrera can be seen approaching a woman and her daughter from behind before snatching her house on May 6. (San Jose Police Department)

The most recent attack took place May 6, when a woman and her young daughter were seen on a surveillance video being approached from behind while walking up a flight of stairs.

Cabrera could be seen grabbing the purse from the victim's arm and then dragging the woman down the stairs along with her daughter.

“The girl was crying,” Huy Voung, who called 911 after hearing the incident, told KTVU. “The mom was screaming multiple times. I don't know if the mom or the child slammed on the ground or the wall but I heard a very loud noise like boom and that’s when I rushed out. The mom and the child went flying down the stairs. That's crazy. For the girl this small, it was too dangerous.”

Robbery detectives were able to locate video surveillance of the robbery, along with a potential suspect vehicle, described as a black Lexus 4-door, leaving the area that led them to Cabrera, who was on parole for burglary, authorities said