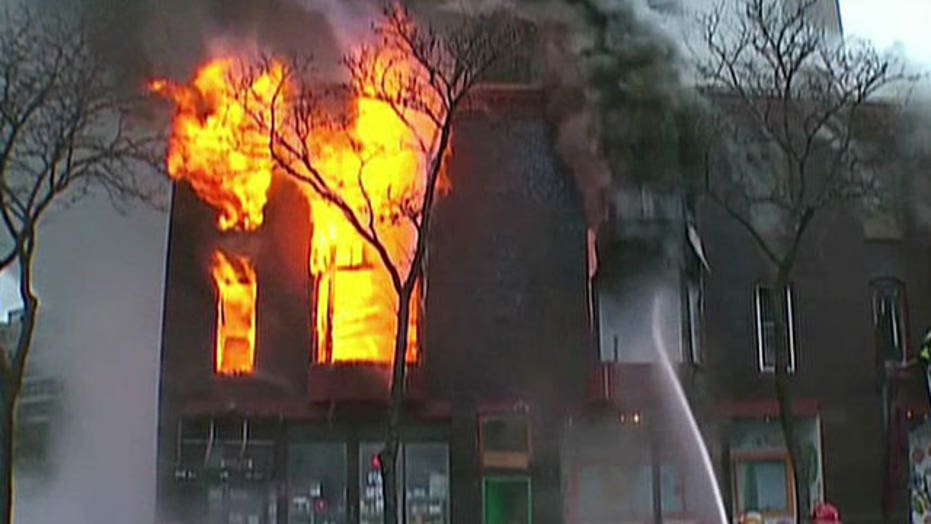 Officials: Unclear if all explosion victims accounted for

Will Carr reports on building fire in Minneapolis, MN

A fire engulfed a three-story building following an explosion near downtown Minneapolis on Wednesday morning, injuring up to 14 people -- 6 critically -- authorities said.

Minneapolis Fire Chief John Fruetel said 14 people were injured and transported to area hospitals following a fiery blast at approximately 8:15 a.m. The victims have injuries ranging from burns to trauma. Some fell or jumped from the windows of the three-story building following the explosion.

Paramedics responded to find victims on the ground, some with injuries that suggested they may have fallen multiple stories. There were no reports of fatalities.

"It's not clear whether people were pushed out of the building from the explosion or whether they fell or jumped out of windows to escape," said Robert Ball, a spokesman for Hennepin County Emergency Medical Services.

Authorities weren't sure whether any residents were still inside. Assistant Minneapolis Fire Chief Cherie Penn said the roof had partially collapsed, and it was too dangerous for firefighters to enter and sweep the premises

Fruetel said the fire was essentially out by late Wednesday afternoon. He said none of the fire crew members was hurt, saying they did a great job under "extreme conditions."

Plumes of thick, whitish-gray smoke could be seen rising from the building, which has a grocery store on the ground floor and two levels of apartments above it. Flames could be seen through third-story windows, and the frigid air was filled was the acrid smell of smoke.

The cause of the fire is still under investigation. "We don’t know the reason for the fire," Fruetel told reporters during a morning press conference.

Abdikadir Mohamed, whose uncle owns the grocery store, watched the scene in silence, struggling to put his thoughts into words.

Firefighting efforts were being hampered by the sub-zero temperatures. As firefighters aimed their hoses at the flames, water gushed from windows and doorways, forming icicles on window frames and leaving the street slick and icy.

The facade of the building and trees out front were also coated with a layer of ice.

Ball said the frosty conditions were creating an additional set of hazards for the 55 firefighters on the scene.

"While heat-related illnesses are common for firefighters, now you combine that with the rapid onset of frostbite or hypothermia when they come out and they're wet and exposed to bitter cold temperatures," he said.

Fire officials appeared to get the fire under control about 11:30 a.m. Firefighters who had been aiming a hose at the flames from a truck-mounted crane shut off their water, and with smoke still billowing from the roof, other investigators began to approach the front door.

"I'm also deeply grateful for the firefighters and other crews who came out here and kept it from getting worse," he said.

A mosque that is next door to the gutted building appeared to escape any obvious structural damage. Abdisalam Adam, the imam at Islamic Civic Society of America & Masjid Dar Al-Hijrah, watched the firefighting efforts and said he was praying for those affected by the fire.

"It's devastating and very sad," he said.