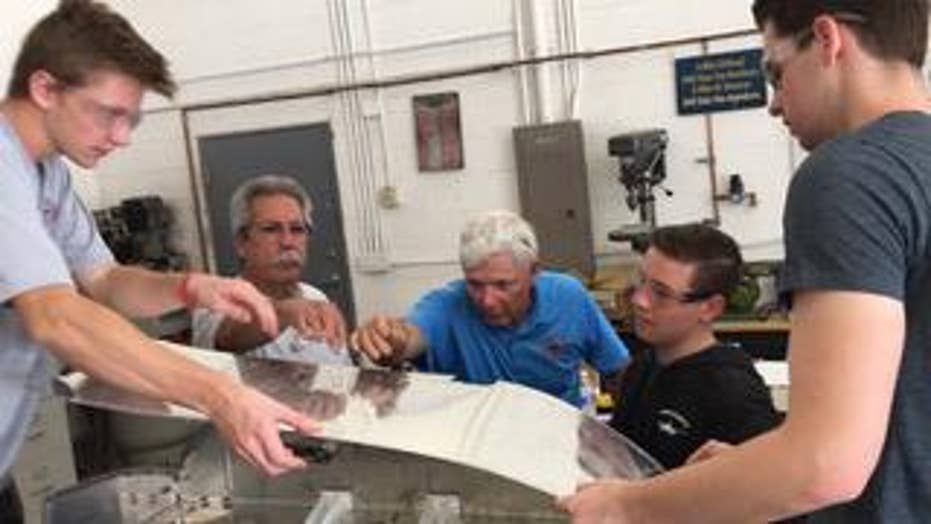 Pilots teaching students how to build an airplane

As the demand for more pilots increases, the group is introducing aviation to the next generation.

TUCSON, Ariz. – Chase Cook, 18, will be attending the University of Arizona in the fall as a freshman, but he’s already learning how to build an airplane. Cook wants to be a pilot, mechanic or engineer in the aviation industry.

Cook is part of Southern Arizona Teen Aviation, a training program formed by pilots in 2017 that teaches high school students twice a week during the school year and once a week in the summer to build a 100-horsepower plane that they plan to fly after it’s done.

The program is the latest push to address a national pilot shortage that threatens to cripple the aviation industry. Nationally, there are few incoming pilots and the existing ones are aging out.

“Other than being here, I don’t really know anybody who wants to fly, to be a pilot, or get into any kind of flying,” Cook said. “It’s given me a little bit of direction kind of, with my life. It gives me, I guess, a line I can kind of follow and go, ‘OK, I’ll follow aviation and see where it takes me.’”

The program, launched with the goal to help kids fulfill their dreams, comes as  air travel demand worldwide grows and a large number of pilots are retiring. Boeing projects that 637,000 new commercial airline pilots will be needed to fly the world fleet over the next 20 years. Industry experts fear that will not be attainable.

“The pilot shortage situation is really becoming dire...There are airliners, multi-hundred-million dollar wide body airliners in some parts of the world sitting idle because there aren’t enough pilots to fly them.”

— Tom Haines, a spokesman for the Aircraft Owners and Pilots Association

“The pilot shortage situation is really becoming dire,” said Tom Haines, a spokesman for the Aircraft Owners and Pilots Association. “There are airliners, multi-hundred-million dollar wide body airliners in some parts of the world sitting idle because there aren’t enough pilots to fly them.”

Experts hope programs like the one in Arizona help attract more pilots in a field struggling to keep up with the fast-growing demand.

"They’re working with each other, they’re working as teams...you overcome this tediousness and this repetitious part of the building by knowing that that piece of metal back there—it’s going to fly.”

The U.S. Department of Transportation said Boeing’s 2016 Pilot Outlook estimates North America alone will need to hire more than 112,000 pilots by 2035 to keep pace with demand. The Regional Airline Association recently reported that by 2020 there will be a cumulative shortage of 19,000 pilots in the United States. The shortage has already prompted airlines to cut down on flights and cancel air service to regional airports and rural communities.

“In this country, we’ve seen airlines shut down. Great Lakes Airlines in the Midwest and the West shut down earlier this year because they couldn’t get enough pilots,” Haines said. “So, it’s become a very serious situation for a lack of pilots. But there’s lots of opportunities, too.”

The Arizona teen program’s core of mentors and volunteers hopes this experience will attract a new crop of pilots for future generations.

For pilots, it’s that feeling of seeing the world from a different perspective, that passion for flying they want to share to the next generation in order to fill the pilot shortage gap.

“A program like this gives the kids an opportunity to not just build the airplane but to interact with each other—they’re working with each other, they’re working as teams,” said Tito Sanchez, a retired Delta pilot and program volunteer. “We switch teams around...They learn that sometimes a job like this can become tedious and repetitious. But, that’s the way it is with many industries, many jobs, and you overcome this tediousness and this repetitious part of the building by knowing that that piece of metal back there—it’s going to fly.”