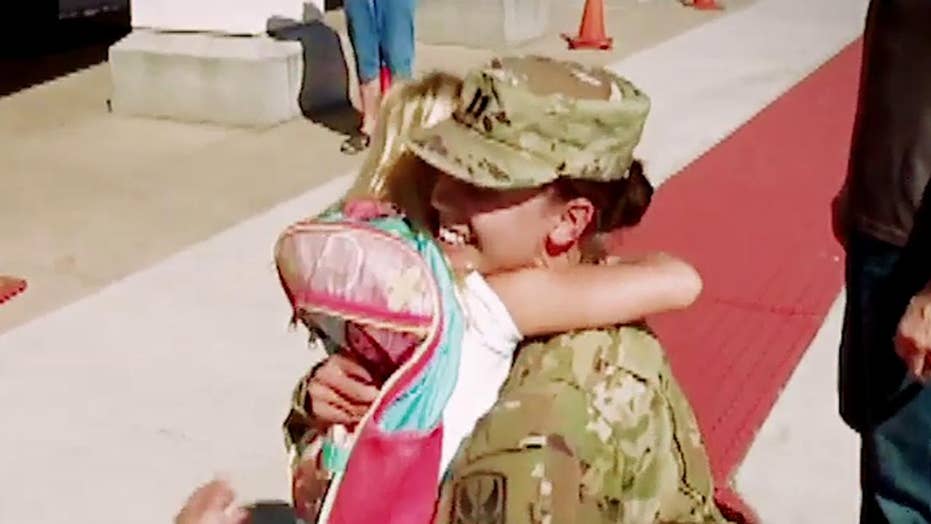 Captain Cynthia Jones made a surprise appearance at her daughters' school.

Break out the tissues — this one’s a tearjerker.

An Army captain serving in Iraq for much of the past year arranged to surprise her two young daughters by showing up at their school on Tuesday, and the girls couldn’t have been happier.

Capt. Cynthia Jones, a Chinook pilot with the U.S. Army, made a surprise appearance at the Galt Adventist School in Galt, Calif., just before her daughters Mary and Naomi were let out of class, Fox 40 reported. Arriving in full uniform, Jones first met with the principal – herself on the verge of tears – to help facilitate the surprise.

Footage of the heartwarming moment shows kindergartener Mary spotting her mother first, and quickly running into her arms. Mary then runs back toward the other schoolchildren to find her third-grade sister Naomi before she, too, runs forward to embrace her mom.

“I don’t know what I’d do without a mom in my life,” added Naomi. “It made me really proud to see that she was home.”

Jones’ husband, too, was just as glad to see his wife after nearly a year. "It's awesome having her back,” said Dan Jones, himself a veteran who previously served in Afghanistan. He also said he spent some time “trying to keep [the girls] occupied, make the time go by faster” in his wife’s absence.

The best news of all? Capt. Jones won’t be leaving her daughters to go back to Iraq, as she has finished her overseas deployment.

"They've grown so much and there's probably a lot that's happened over this last year that I've missed," Jones, who will now serve with the Army National Guard, told Fox 40. "But I'm excited to come back and be a part of this."