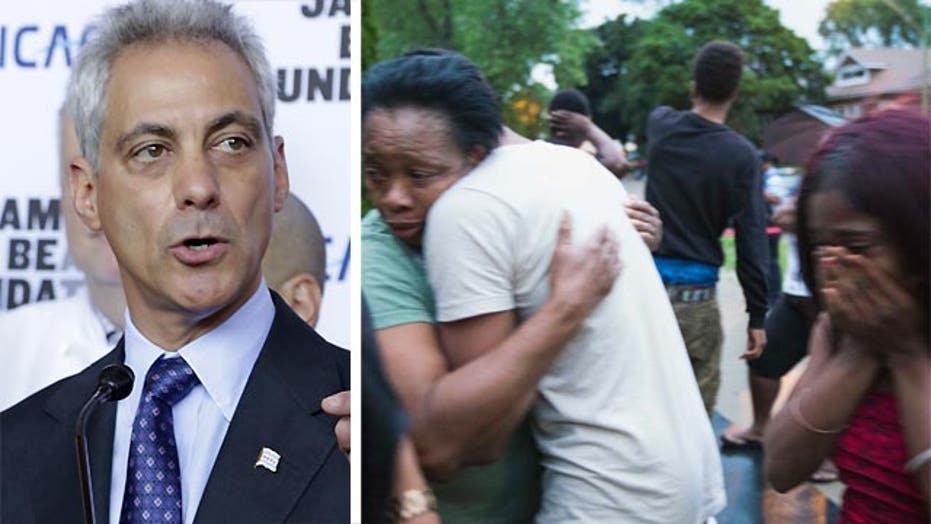 Jasmine Curry, a mother of five and five months pregnant, lay dead along Chicago’s Dan Ryan expressway Wednesday morning, the latest victim in Chicago’s epidemic of gunfire with a bullet to the head.

It was uncommon that she was shot on the expressway, not uncommon that someone from her neighborhood was killed. In fact, Jasmine was not even the first person in her family to be gunned down.

The gangland vendettas raged on the South and West Sides of Chicago over the holiday weekend. Thirteen people were killed, another 58 wounded as the bullets flew. Police were fired on and in at least five incidents, they returned fire, killing two.

From the basement of the Shiloh Missionary Baptist Church,Rev. Jesse Jackson inferred that city leaders in Chicago could not handle the violence on their own and federal resources were needed to control the flow of illegal weapons.

“We’re crying out, the FBI must intervene,” he said.

Jackson also demanded federal funds to rebuild the blighted communities that are incubators for the gun violence.

“If we can find the money necessary to help children on the borders,$2 billion can come to Chicago to make where we live safe and secure,” Jackson said. “We deserve safety. We’re not getting safety.”

For Emanuel, the problem is more complicated than armed FBI agents, an influx of money, new laws or a police crackdown. There are cultural issues, moral issues, a lack of jobs or alternatives for gangland youths. He frequently preaches his “Four P’s”: policing, penalties for guns getting in the hands of violent criminals, prevention and parenting. The absence of that last item makes poor, young men so easy to indoctrinate in the street gangs.

Illinois Governor Pat Quinn said he discussed sending some resources to the state’s largest city. “If the city of Chicago needs the help of the State Police, at any time, all they have to do is call,” he said, without indicating that Emanuel took him up on the offer.