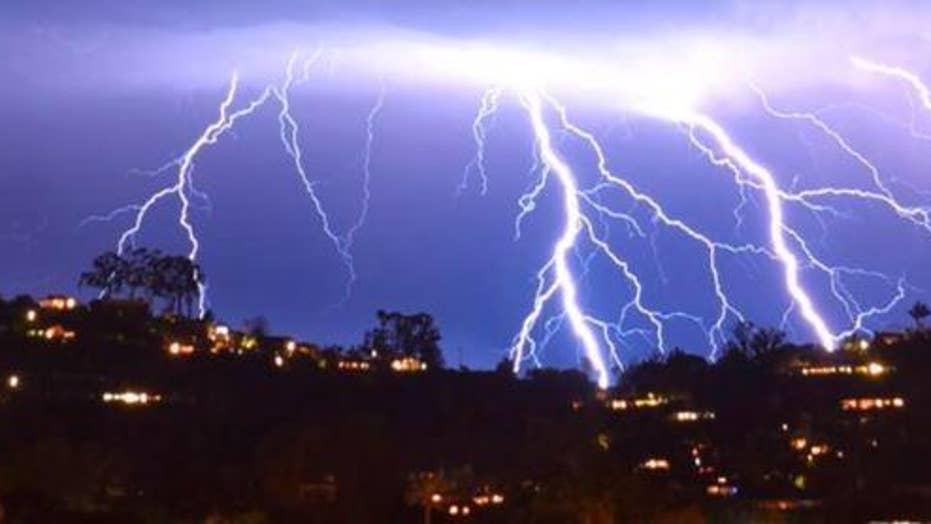 From whirling winds to literal walls of ice, there were some pretty wild weather moments in 2019.

The year started out on a frigid note with the record-breaking cold thanks to the polar vortex before areas from the Southern Plains to the Northeast saw the most "prolonged stretch" of tornado and severe weather in eight years.

Later in the year, the fourth consecutive above-normal Atlantic hurricane season would see 18 named storms, including six hurricanes of which three became "major" hurricanes of Category 3 or higher on the Saffir-Simpson Hurricane Wind Scale. But some of the wildest weather moments were not even from high-profile storms and happened in places such as upstate New York and in a major city in Mexico.

Here are the wildest weather moments of 2019:

Large ice mounds can be seen at Hoover Beach along Lake Erie in New York on Feb. 24, 2019. (Town of Hamburg Emergency Services)

High winds that caused travel across the eastern half of the country with power outages and travel delays in February created another problem: a literal wall of ice.

The windstorm created an "ice tsunami" on Feb. 24 across parts of New York along Lake Erie, pushing large chunks of ice along lakeshore areas. The Niagara Parks Police Service posted video to Twitter showing the chunks of ice stacked up along the Niagara River Parkway along the lake, forcing the roadway to be closed in some sections.

High winds had raised water levels on the eastern end of Lake Erie in a phenomenon known as a seiche and then, according to the New York Power Authority, driven ice over a boom upstream from the river. Ice mounds between 25 and 30 feet high could be seen in photos approaching people's homes.

The ice tsunami along the Hoover Beach area of Hamburg, New York spurred a voluntary evacuation for residents there.

The ice mounds spurred a voluntary evacuation for residents in Hoover Beach in February. (Town of Hamburg Emergency Services)

"Residents in Hoover Beach can expect the Woodlawn FD to come door to door accounting for residents," town officials said in a Facebook post.

The wind was to blame for another strange moment over the summer when a man in Colorado captured dozens of air mattresses set up for a movie night blown by strong winds across a park outside Denver.

Raw video: Strong wind gusts send dozens of mattresses from an outdoor movie flying through the air in Denver, Colorado.

Robb Manes said he was at the Runway 35 park in Denver's Stapleton neighborhood on Aug. 17 when he noticed something that looked rather unusual.

"We were hanging out at the pool when, suddenly, a mattress flew into the fenced-in area," Manes wrote on YouTube. "When a second and third one came in, we stood up, I grabbed my camera, and this is what we saw."

The video shows dozens of air mattresses tumbling across a grassy park, flying near a pool as ominous-looking storm clouds appear. Several people can be seen trying to run after the mattresses, with some ducking for cover.

"So majestic," he wrote.

A toilet exploded inside a home in Florida after lightning struck nearby in August. (A-1 Affordable Plumbing Inc.)

A lightning strike was blamed for an explosive surprise in Florida when it triggered a blast that destroyed a toilet.

Marylou Ward and her husband were sitting in their Port Charlotte home as a thunderstorm rolled through on Aug. 4 when she said she heard a "boom" that was "the loudest noise I ever heard."

When she stepped into her bathroom, she discovered the toilet was now in hundreds of pieces. A plumber from A-1 Affordable Plumbing Inc. told the couple the lightning strike ignited methane gas that built up in the pipes and septic tanks. Methane is typically emitted during the breakdown of sewage in waste systems.

"The toilet exploded in homeowners master bathroom sending porcelain airborne like a missile (the porcelain penetrated into wall). Most likely all sewer piping will need to be replaced and septic tank," a plumber posted to Facebook. "Luckily no one was hurt! Scheduling a camera inspection this week to see how much sanitary pipe needs to be replaced!!"

In 2018, the Sunshine State had the highest density of lightning strikes, according to environmental measurement specialist Vaisala, which released its Annual Lightning Report. Florida had the highest average of negative ground-to-cloud flasher per square mile, with 24, according to the study.

Lightning lights up the skies of Southern California

Another electrifying moment in 2019 happened in the skies over Southern California.

The National Weather Service's office in Los Angeles said a weather system known as an "atmospheric river" was bringing isolated thunderstorms, along with heavy rain, flooding, and flash flooding to the region on March 5 when 1,500 pulses of lightning were recorded off the coast in one 5-minute stretch.

The NWS warned people to be careful watching the spectacle in the sky.

"Don't be a statistic!" the agency said.

Freak hailstorm in Mexico buries cars, streets in up to 5 feet of ice

The storm struck Guadalajara, Mexico on June 30 trapping residents in a deluge of ice up to 5 feet deep. (Protección Civil JAL)

In the middle of the summer, one of Mexico's largest cities was transformed into a scene straight out of winter when a freak hailstorm dropped a deluge of ice that left streets impassable and cars buried.

The hailstorm in Guadalajara, located north of Mexico City, happened on June 30 after several days during which temperatures approached 90 degrees.

Residents across the city of around five million woke up to discover mounds of ice up to five feet deep in places from the overnight storm, with around 200 homes and businesses reporting damage. Photos posted by police showed vehicles that had been swept away and then trapped in the icy deluge.

Hail forms when a water droplet is picked up by updrafts of warm air in a thunderstorm and then travels well above the freezing level and freezes, according to the National Weather Service.

"As the frozen droplet begins to fall...carried by cold downdrafts...it may thaw as it moves into warmer air toward the bottom of the thunderstorm," the NWS states. "Our little half-frozen droplet may also get picked up again by another updraft...carrying it back into very cold air and re-freezing it."

The journey in the updrafts and downdrafts of a thunderstorm will add another layer of ice to the frozen droplet until it finally falls to the ground as hail.

"The presence of large hail indicates very strong updrafts and downdrafts within the thunderstorm," the NWS states.