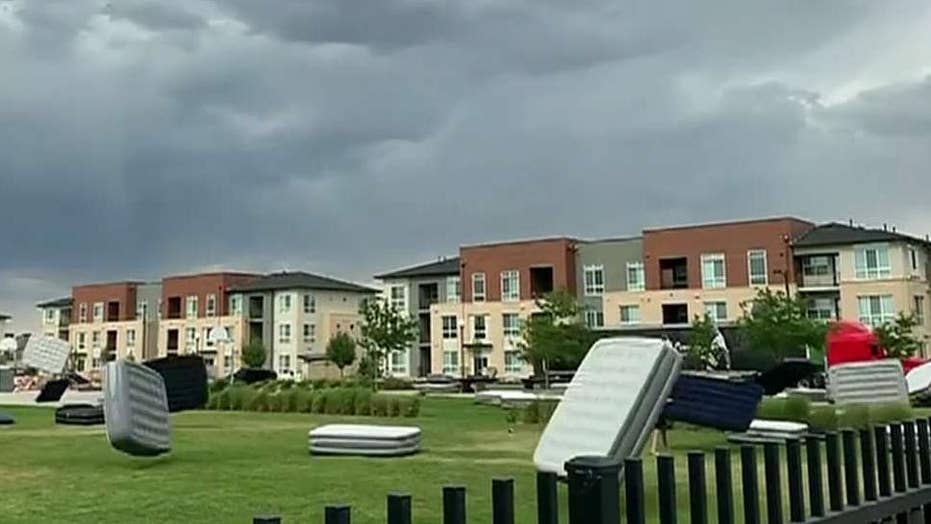 Raw video: Strong wind gusts send dozens of mattresses from an outdoor movie flying through the air in Denver, Colorado.

This was a different kind of mass migration.

A man in Colorado captured the moment over the weekend when dozens of air mattresses set up for a movie night were blown by strong winds across a park outside Denver.

Robb Manes said he was at the Runway 35 park in Denver's Stapleton neighborhood on Saturday when he noticed something that looked rather unusual.

"We were hanging out at the pool when, suddenly, a mattress flew into the fenced-in area," Manes wrote on YouTube. "When a second and third one came in, we stood up, I grabbed my camera, and this is what we saw."

The video shows dozens of air mattresses tumbling across a grassy park, flying near a pool as ominous-looking storm clouds appear. Several people can be seen trying to run after the mattresses, with some ducking for cover.

The National Weather Service's Boulder Office had advised on Twitter that isolated thunderstorms were reported in the area, bringing "gusty winds" up to 50 mph.

SEE IT: THOUSANDS OF BIRDS KILLED DURING HAILSTORM AT MONTANA WILDLIFE PRESERVE

"Apparently there was a 'Movie Night Under The Stars' and in Denver, Colorado fashion, a storm blew in, and this is the result," Manes said.

Some of the mattresses ended up being blown into a nearby pool as stunned onlookers watched.

Since posting the video, Manes has racked up over 177,000 views on YouTube.

"So majestic," he wrote.