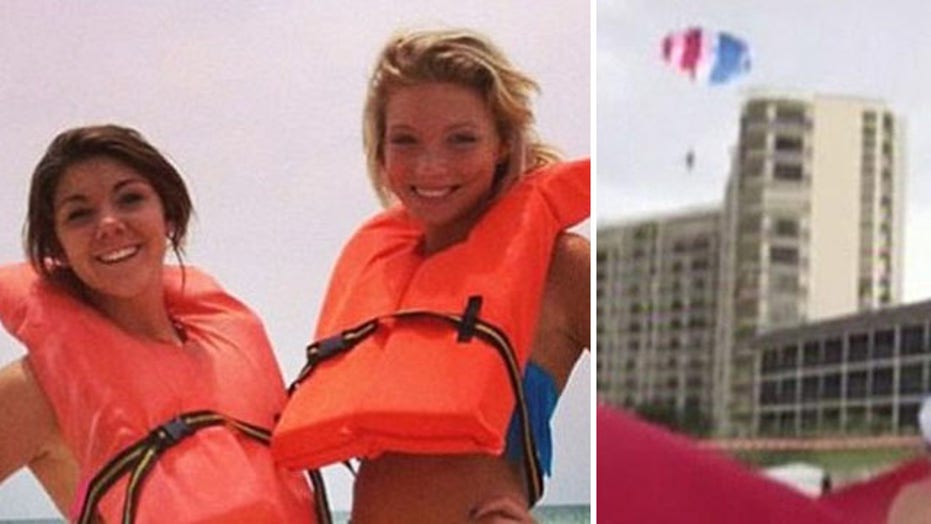 Girls slam into building after parasail detached from boat in Florida

The two Indiana teens who suffered severe injuries during vacation in Panama City, Fla., after their parasail became untethered from a boat earlier this week remain in critical condition Thursday morning.

The families of Sidney Good and Alexis Fairchild, both 17, expressed optimism in a statement, saying the girls were able to make small gestures to communicate, but face a challenging road ahead.

The two teens, both from Roanoke, Ind., suffered head trauma and severe lacerations, The News Herald reported. Fairchild has severe back injuries and Good sustained neck trauma, the statement said.

"Alexis (Fairchild) had surgery on her spine and has also been responsive including a small wave at her parents when she returned from surgery," the statement said. "Our families are incredibly touched by all the support we've received from friends at home and from many people we haven't met before who are praying for our girls."

Video of the incident shows the parasail colliding with a building next to the beach. The Bay County Sheriff's Office said the parasail had been attached to a boat Monday afternoon when the line broke.

One victim dropped into the Gulf of Mexico and was rescued. The News Herald reports  that the two teens continued on until the parasail crashed into a nearby parking lot.

The accident on the parasail was called gruesome by one witness on vacation from Georgia. The teens smashed into a building, carried to a power line and crashed into several cars inside to parking lot, the report said. The teens both went limp after hitting the side of the condo and only one was conscious when rescuers arrived, the report said.

Winds from a storm reportedly kept the parasail aloft and out of the grasps of the vessel attempting to recover them, the Florida Fish and Wildlife Conservation Commission said in a statement.

"We knew they were going to hit, but there was nothing we could do about it," Amy Barron, of Alabama, told the paper at the time.

The News Herald reported that Aquatic Adventures, the watersports company that was towing the girls, called the incident "tragic."

"Our heartfelt sympathies go out to the families of the injured girls and we all pray for their speedy recovery," wrote Jeff Jones, owner of Aquatic Adventures. "While we adhere to best practices to minimize the risks associated with watersport activities, sudden weather conditions can and do occur."

WJHG.com quoted a lawyer suing the company. Wes Pittman told the station that "the case involving the two girls from Indiana who were hurt just two days ago is strikingly similar to the case I have against this company that's ongoing right now.” His clients, also from Indiana, landed in the water after their rope snapped, he said.

Florida Fish and Wildlife Conservation Commission told the paper an investigation is ongoing.