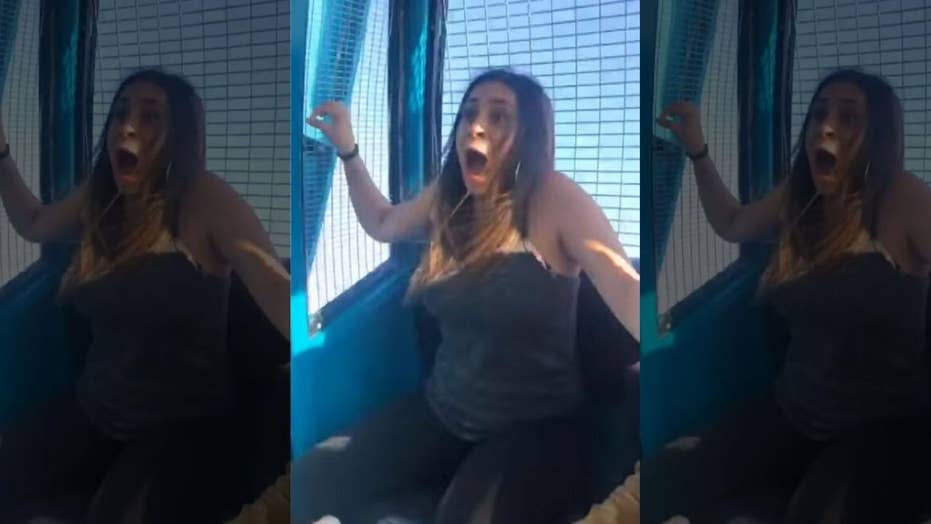 They don’t call it a thrill ride for nothin’.

A newly shared video clip taken at an amusement park in Anaheim, Calif., shows a woman having what appears to be a full-on meltdown after being tricked into riding a Ferris wheel with individually-swinging cars.

The video is believed to have been shot on Mickey’s Fun Wheel at Disney California Adventure Park. (Alexis Jimenez via ViralHog)

"I was tricked into getting onto the ride by my uncle and cousins who told me we were getting on the non-swinging ones,” the woman later said in a statement shared by ViralHog.

SEE IT: REPORT OF 'BABY YODA' ADDITION TO DISNEY WORLD IS JUST A HOAX, PARK CONFIRMS

As seen in the footage, which was taken in October, the screaming woman can be seen holding onto the cage surrounding the car. Her fellow occupants — presumably her friends and family — instruct her to try closing her eyes, but she refuses.

When someone else informs her that “people are looking” at her, she responds by telling him, “I don’t care! I don’t like this!”

She then resorts to screaming for most of the rest of the ride.

Especially when it resumes swinging. (Alexis Jimenez via ViralHog)

Commenters on YouTube alternated between mocking the terrified passenger and empathizing with her plight.

“I feel her pain… Like I could do rollercoasters and any other scary ride but I'm scared to death of the Ferris wheel,” one person wrote.

“Are Pampers provided for this ride?” another asked.

Although no one in the video explicitly states it, the video is believed to have been shot on Mickey’s Fun Wheel at Disney California Adventure Park.

Fox News was unable to reach the woman in the video to confirm whether she indeed had any of that “fun” Mickey promised.