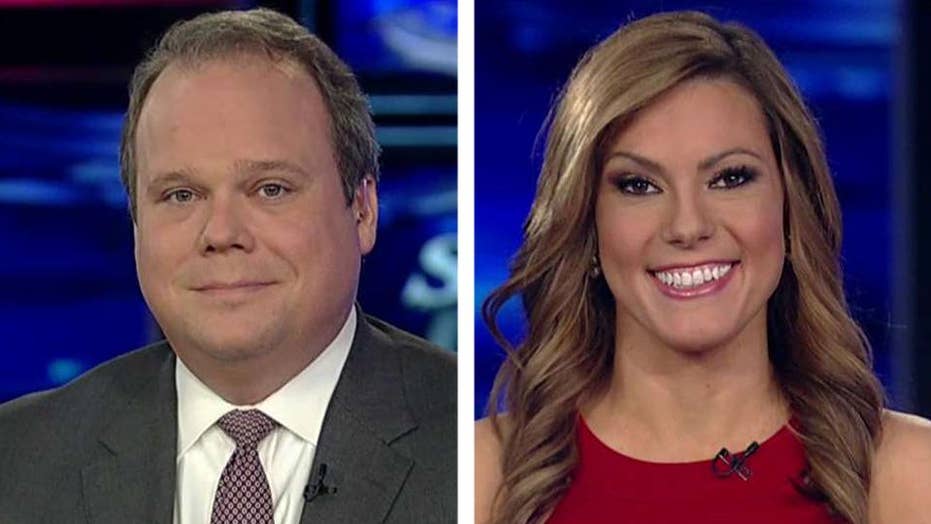 Moore and Jones face off in high-stakes election

This is a rush transcript from "Special Report with Bret Baier," December 12, 2017. This copy may not be in its final form and may be updated.

ROY MOORE, REPUBLICAN SENATE CANDIDATE: We are Alabama. We are Republicans.

MOORE: I'm not talking to accusers today. I'm talking to the people of Alabama.

UNIDENTIFIED FEMALE REPORTER: How are you feeling?

UNIDENTIFIED FEMALE VOTE: I think it's a very clear choice for our new senator.

UNIDENTIFIED MALE VOTER: This is about decency and integrity.

UNIDENTIFIED FEMALE VOTER: We will make a difference if we come out.

SENATE MAJORITY LEADER MITCH MCCONNELL, R-KY.: And we await the outcome of the Alabama Senate race.

BRET BAIER, ANCHOR: Well, it could be a barn burner down there in Alabama. It is election night in Alabama for that Senate special election, Roy Moore, Doug Jones. Where are we? Let's bring in our panel: Lisa Boothe, columnist with The Washington Examiner; Chris Stirewalt, politics editor here at Fox News, and Caitlin Huey-Burns, national political reporter for Real Clear Politics. Before we go further, you've been in the deep, dark room we call the decision desk. Looking at this time voter analysis --

STIREWALT: Know it, learn it, love it.

BAIER: Love it. What do you got for us?

STIREWALT: I can tell you that turnout looks pretty robust. There was speculation from election officials in Alabama that we were going to see rock bottom turnout, 20 percent, 25 percent turnout. We're looking at turnout that is approaching the kind of numbers you would see in a midterm, real engagement, voters are coming out. And that may not be great news for Roy Moore.

BAIER: So that is the question is whether new voters are somehow energized by all of this controversy to come out, Caitlin.

CAITLIN HUEY-BURNS, REAL CLEAR POLITICS: Certainly. And this has become a nationalized special election certainly. You have Democrats talking about this as a way to really send a message. You have Republicans really concerned about the election. I think this would be the first congressional election that we've seen in which national Republicans might be rooting against their own candidate in this race in Roy Moore, concerned about how to deal with him if he is in fact elected tonight.

BAIER: So to that point, Roy Moore did a radio interview today in which he was asked about a Senate ethics investigation possibly if he wins the election. Here's what he said.

MOORE: It does not concern me because it would be unconstitutional. And under article one, section five part one and two, it's not a qualification for office and, two, it's not, disorderly behavior, if it were true, it's not true, but it's not only not true, they don't have that jurisdiction to overcome the vote of the people.

BAIER: That's not the smoothest closing argument, I guess.

LISA BOOTHE, THE WASHINGTON EXAMINER: And that's what Republicans are grappling with. If Moore wins, what do you do? It would be unprecedented to try to vote to expel a duly elected member of the Senate when voters had knowledge of the allegations before they head to the polls. But Caitlin is right. This election is a national election that Democrats are making it. There is a reason Conyers and Senator Franken were forced to step aside and to resign. Democrats are looking at 2018 and they're looking at 2020. There's a reason Democrats held a press conference today calling on President Trump to resign, making this about President Trump.

But I think there's flaws with that, looking opportunistic. Also considering the fact that Nancy Pelosi not too long ago was saying Franken was an icon. Gillibrand has embraced people like Bill Clinton until it was no longer politically expedient for her to do so. We also don't know what other shoes are going to drop with the actual allegations things. And two --

BAIER: With other lawmakers, you mean.

BOOTHE: Right. And do they make 2020 another referendum on identity politics which didn't serve them well in not focusing on the issues like the economy that so many Americans care about.

BAIER: Clearly the Democrats are it looks like clearing the plate to try to use this as an election issue in 2018. To that point that press conference got the president fired up. He went to Twitter saying "Lightweight Senator Kirsten Gillibrand a total flunky for Chuck Schumer and someone who would come to my office begging for campaign contributions not so long ago and would do anything for them is now in the ring fighting against Trump. Very disloyal to Bill and crooked-used!" Here's the senator responding and the Senate minority leader:

SEN. KIRSTEN GILLIBRAND, D-N.Y.: It was a sexist smear attempting to silence my voice, and I will not be silenced on this issue. Neither will the women who stood up to the president yesterday.

SENATE MINORITY LEADER CHARLES SCHUMER, D-N.Y.: That tweet was nasty, unbecoming of a president. Senator Gillibrand is an outstanding member of the Senate. The president needs to cut it out with the tweeting.

BAIER: The White House said that he has used that terminology before talking about men who asked him for donations on both sides of the aisle.

HUEY-BURNS: They made that argument, although I think given the backdrop of what we're seeing in terms of the cultural change in this country, it could be taken as very insensitive and open-ended. I do think that Democrats do carry some risks in politicizing this, but for now they think that this is an energizing moment for them, being able to say we cleared our decks here, putting the spotlight back on the president ahead of these midterms, especially given how much the ground has shifted just in the past few weeks in Congress with these allegations.

BAIER: Ten seconds here, what are we looking for tonight?

STIREWALT: What we're looking for, just pay attention to Birmingham. I'm sorry, the rest of Alabama. We're going to be paying very close attention to Birmingham and suburbs, that's the place where Jones has got to run up the score. That's the whole thing right there. A little bit down on the gulf coast but Birmingham and suburbs, that's where it's at, that's where he's got to do it if he has a chance to be the first Democrat to be elected statewide in this state since 2006.